SM—The SM server stores subscriber and VPN information and updates the Service Control Engines (SCEs). The BGP adapter, an SM component, receives the routes from the BGP LEG and handles the adjustments to the regular VPN login/logout operations. 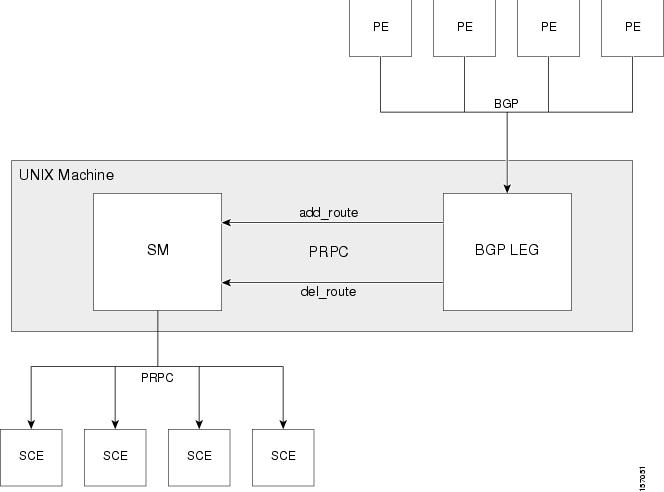 The BGP LEG also supports receiving BGP updates from a Route Reflector (RR), instead of from each Provider Edge (PE) router separately. The BGP LEG can receive updates from a RR and from PEs that are not covered by the RR at the same time.

The PE router that is connected to the VPN site. The IP address of the loopback interface identifies the router.

The VPN can be identified using either the RD attribute or the RT attribute. It is necessary to decide which attribute best reflects the VPN partitioning, and then configure the SM accordingly. Note that the configuration is global for all the VPNs, that is all VPNs must be identified by the same attribute.

The RD is most commonly used to identify the distinct VPN routes of separate customers who connect to the provider. Therefore, in most cases the RD is a good partition for the VPNs in the network. Since the RD is an identifier of the local VRF, and not the target VRF, it can be used to distinguish between VPN sites that transfer information to a common central entity (for example, a central bank, IRS, Port Authority, and so forth).

The RT is used to define the destination VPN site. Although it is not intuitive to define the VPN based on its destination routes, it might be easier in some cases. For example, all when the VPN sites that communicate to a central bank are treated as a single VPN, it is worthwhile to use the RT as the VPN identifier.

It is important to note that the configuration is global. Thus, if at some point in time a certain VPN needs to be defined by RD, then all the VPN must be defined by RD as well. This is a point to consider when designing the initial deployment.

The SM starts up.

The BGP LEG establishes a PRPC connection to the SM.

An MPLS-VPN based subscriber can be defined to handle the traffic of a specific Customer Edge (CE) router. The BGP community field is used to correlate the private IP routes with the CE router. The subscriber is configured with a list of communities within the VPN using the syntax `community@VPN'.