This chapter describes the possible deployment topologies of the Cisco SCE8000 GBE and explains how to configure the relevant parameters correctly for each topology.

The Cisco SCE8000 GBE is a solution for multi Gigabit Ethernet links with load sharing and asymmetrical routing and support for switchover between two SCE platforms.

Single Cisco SCE8000 GBE topology—Provides the ability to process both directions of a bi-directional flow, processing both the upstream and downstream paths of a flow, even if they traverse different links.

There are several issues that must be considered to arrive at the optimum configuration of the topology-related parameters:

To perform control functions, the Cisco SCE8000 GBE must be physically installed as an inline installation.

Either an inline installation or an optical splitter or Switched Port Analyzer (SPAN) installation may be used for monitoring only.

A Cisco SCE8000 GBE deployment can range from a single platform to multiple platforms.

A complete discussion on sizing the system is beyond the scope of this document. Information about the number of Cisco SCE8000 GBE platforms required is related to the design considerations per link (topology and redundancy factors) rather than to overall sizing of the system.

How should the Cisco SCE8000 GBE respond to platform failure about link continuity? Should traffic flow continue even though the unit is not operating, or be halted until the platform is repaired or replaced?

If link continuity is a high priority, an external optical bypass module can be installed on the link. (See the "Link Continuity" section on page 3-7 and the "Cisco SCE8000 GBE Optical Bypass" section on page 2-10.)

In cascade configuration, installation of an external optical bypass module is highly recommended.

Physical topology of the system—Actual physical placement and connection of the
Cisco SCE8000 GBE platform or platforms in the system.

Topology-related configuration parameters—Correct values for each parameter must be ascertained before configuring the system to make sure that the system functions in the desired manner.

Following are descriptions of several physical topologies that the Cisco SCE8000 GBE supports.

Figure 3-1 shows the numbering of the Cisco SCE8000 GBE interfaces as indicated in the topology diagrams in this chapter. The interface numbering is explained as follows:

Second digit is the number of the sub-slot or SPA module (0 to 3).

Third digit is the number of the interface on the designated SPA module (0 to 7). 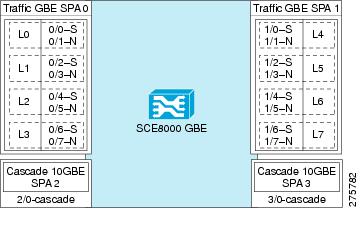 A single Cisco SCE8000 GBE supports several different topologies, depending on the number of SPAs and the connection mode.

Table 3-1 lists the number of traffic links per number of SPAs. When configuring the Cisco SCE8000 GBE , an inline installation is referred to as inline connection mode. 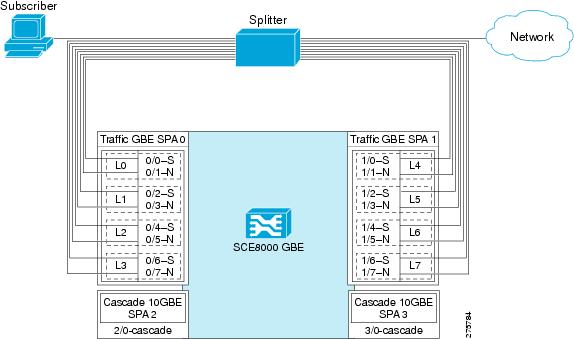 When configuring the Cisco SCE8000 GBE, an optical splitter topology is referred to as receive-only connection mode.

Note that in an optical splitter topology, the Cisco SCE8000 GBE only enables traffic monitoring functionality.

When implementing receive-only topologies with a switch, the switch must support SPAN functionality that includes separation between ingress and egress traffic and multiple SPAN-ports destinations. This switchover solution preserves the Cisco SCE8000 GBE functionality and the network link:

When one Cisco SCE8000 GBE fails (depending on the type of failure) its link traffic is still bypassed to the functioning Cisco SCE8000 GBE and processed there, so the traffic processing continues for both the links.

In addition, optional external optical bypass devices provide link continuity during any failure of the Cisco SCE8000 GBE. This ensures 100% link continuity at the expense of service inaccuracy as a result of the traffic of the failing box not being processed.

The internal bypass mechanism of the Cisco SCE8000 GBE allows traffic to continue to flow, if desired, even if the device itself is not fully functioning. In addition, the Cisco SCE8000 GBE is designed with the ability to control up to four external optical bypass devices (each optical bypass supports two links). This is needed because the internal bypass mechanism cannot maintain traffic flow in all cases.

Bypass—The bypass mechanism preserves the network link, but traffic is not processed for monitoring or for control.

Forwarding—This is the normal operational mode, in which the Cisco SCE8000 GBE processes the traffic for monitoring and control purposes.

Cutoff—There is no forwarding of traffic, and the physical link is forced down (cutoff functionality at Layer 1).

The SIP module cannot preserve the link in the following circumstances:

During platform reboot (SW reload), there is an 11-second period during which the link is forced down (cutoff functionality). If any routing or spanning tree protocols are used in the network, this delay may be extended.

Under certain types of failure within the SIP module, the SPA cards, or the 10 Gbps Small-form Factor Pluggable (XFP) optic modules. 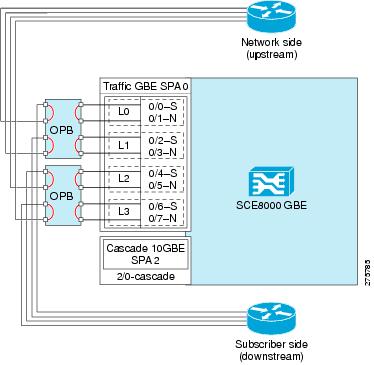 In cascade configuration, installation of the optical bypass module is highly recommended.

This optical bypass module can be added to link without altering the basic characteristics of the topology. The installation procedure and the actual connections are somewhat different when the optical bypass module is used. (See the "Optical Bypass Module Connectivity" section on page 6-5.)

See the following sections to determine the correct values for all topology-related parameters before beginning to run the initial setup of the Cisco SCE8000 GBE.

There are four topology-related parameters:

Connection mode—Can be any one of the following, depending on the physical installation of the Cisco SCE8000 GBE (See the "Connection Mode Parameter" section on page 3-11):

It is applicable only in a cascade topology.

The sce-id parameter, which identifies the SCE platform, replaces the physically-connected-link parameter, which identified the link. This change was required because the Cisco SCE8000 GBE platform supports multiple links. However, for backwards compatibility, the physically-connected-link parameter will still be recognized and the number of the link assigned to that parameter (0 or 1) is defined as the sce-id.

Priority—This parameter defines which is the primary Cisco SCE8000 GBE. (See the "Priority" section on page 3-11.)

It is applicable only in a cascade topology

On-failure—This parameter determines whether the system cuts the traffic or bypasses it when the Cisco SCE8000 GBE either has failed or is booting. Traffic bypass can be achieved either through the external optical bypass device or through the internal bypass mechanism of the SPA interface processor. It is not applicable to receive-only topologies. (See the "On-Failure Mode Parameter" section on page 3-12.)

These parameters are configured using the connection-mode command.

Inline—The Cisco SCE8000 GBE resides on the data link between the subscriber side and the network side, thus both receiving and sending packets.

The connection mode parameter is determined by the physical deployment of the Cisco SCE8000 GBE, as follows:

This parameter is then added to the slot/subslot/port designation in interface configuration commands as well as related show command output as follows:

In a cascade topology, the user must define the priority of each Cisco SCE8000 GBE.

These defaults apply only when both devices are started together. However, if the primary
Cisco SCE8000 GBE fails and then recovers, it will not revert to active status, but remains in standby status, while the secondary device remains active.

The on-failure mode parameter configures the action taken by a failed SCE platform when a failure is detected.

As described in the "Internal Bypass Mechanism" section on page 3-7, the SPA Interface Processor card supports three different modes. The Bypass, External Bypass, and Cutoff modes are possible when the Cisco SCE8000 GBE is not operational because of platform failure or boot. The Forwarding mode enables control of traffic flow and is not compatible with the non-operational status.

The following on-failure modes are possible:

Bypass—The SPA interface card forwards traffic between the two ports of each link with no intervention of the control application running in the Cisco SCE8000 GBE platform. This is also known as electrical bypass.

In a cascade setup, this allows the traffic of the link connected to the failed box to be passed to the active box for processing.

Cutoff—There is no forwarding of traffic. The link is forced down, resulting in traffic cutoff at Layer 1.

In a single Cisco SCE8000 GBE topology, the value of this parameter is determined by whether or not the link can be completely cut when the Cisco SCE8000 GBE fails, or whether traffic flow should continue across the link in spite of platform failure. In the latter case, the external-bypass mode is the recommended setting, and is therefore the default value for the on-failure mode parameter.

In a cascaded Cisco SCE8000 GBE topology, the default on-failure mode is Bypass, because it preserves full traffic processing functionality on both links in most single box failures (as long as the SPA interface card is functioning properly).

Cutoff mode is suggested for the following:

Non-redundant inline topology if value-added services (such as security) are crucial and are more important than maintaining connectivity.

Bypass mode is suggested for the following:

When connectivity is of high importance. Note, however, that the link may be forced down for up to ten seconds during reboot and is not preserved on power failure.

External-bypass mode is suggested for the following:

Non-redundant inline topology if connectivity is crucial and must also be preserved on power failure.

Redundant inline setups, if connectivity is crucial. Note that when this mode is used, the serviced traffic may experience some service inaccuracy because of the traffic of the failing box not being processed.

In some Service Control deployments, asymmetrical routing occurs between potential service control insertion points. Asymmetrical routing can cause a situation in which the two directions of a bi-directional flow pass through different SCE platforms, resulting in each SCE platform seeing only one direction of the flow (either the inbound traffic or the outbound traffic).

This problem is typically solved by connecting the two SCE platforms in cascade mode, thereby making sure that both directions of a flow run through the same SCE platform. However, this is sometimes not feasible, because of the fact that the SCE platforms sharing the split flow are geographically remote (especially common upon peering insertion). In this type of scenario, the asymmetric routing solution enables the SCE platform to handle such traffic, allowing SCA BB to classify traffic based on a single direction and to apply basic reporting and global control features to uni-directional traffic.

Asymmetric routing can be combined with most other Service Control capabilities, however there are some exceptions.

Service Control capabilities that cannot be used in an asymmetric routing topology include the following:

Any kind of subscriber integration. (Use subscriber-less mode or anonymous subscriber mode instead)