This chapter provides an introduction to the Cisco SCE8000 GBE platform, the Service Control hardware component.

Information About the SCE8000 GBE Platform

Introduction to SIPs and SPAs

Information About the SCE8000 GBE Platform

The Service Control Engine (SCE) platform, which is the hardware component of the Cisco Service Control solution, is designed to support observation, analysis, and control of Internet/IP traffic. The following table summarizes model information for the Cisco SCE8000 GBE platform.


The Cisco SCE8000 GBE is a transparent element with up to eight GBE links service throughput. It can be installed inline in the network where the entire traffic passes through it or in receive-only mode where it receives replication of the traffic through SPAN ports or optical splitters (Figure 2-1).

The Cisco SCE8000 GBE platform is a 4-slot chassis hosting the following modules:

In addition, the Cisco SCE8000 GBE chassis contains two power supply modules in a 1+1 configuration, as well as a fan tray module.

Introduction to SIPs and SPAs

SIPs and SPAs are a new Cisco carrier card and port adapter architecture used to increase modularity, flexibility, and density for network connectivity. This section describes the SIPs and SPAs and provides some guidelines for their use.

Specifying the SIP Subslot Location for a SPA

The SIP module supported by the Cisco SCE8000 GBE chassis is the SCE8000-SIP.

The following list describes some of the general characteristics of a SIP:

A SIP is a carrier card that inserts into a slot in the chassis like a line card. It provides no network connectivity on its own.

A SIP contains one or more subslots (bays), which are used to house one or more SPAs. The SPA provides interface ports for network connectivity.

During normal operation the SIP should reside in the SCE8000 GBE chassis fully populated either with functional SPAs in all subslots, or with a blank filler plate (SPA-BLANK=) inserted in all empty subslots.

Specifying the SIP Subslot Location for a SPA

Cisco SCE8000-SIP subslots begin their numbering with "0" and have a horizontal orientation.

Figure 2-3 shows the subslot numbering for the Cisco SCE8000-SIP.

The Cisco SCE8000-SIP supports four subslots for the installation of SPAs, as follows:

The following SPA modules are supported by the Cisco SCE8000-SIP:

The following list describes some of the general characteristics of a SPA:

A SPA is a modular type of port adapter that inserts into a subslot of a compatible SIP carrier card to provide network connectivity and increased interface port density. The Cisco SCE8000-SIP can hold up to four SPAs.

The supported SPA is a single-height SPAs, which inserts into one SIP subslot. (See Figure 2-4.)

Each 8-port Gigabit Ethernet SPA provides eight GBE ports, which interface with either subscriber or network traffic. These interfaces can be individually configured using the Cisco command-line interface (CLI).

8-port Gigabit Ethernet SPAs can be installed in subslots 0 and 1 only.

Each 1-Port 10-Gigabit Ethernet SPA provides a one 10GBE port to connect to the corresponding cascade interface on the peer SCE8000 GBE platform in a cascaded pair. These interfaces are not explicitly configured.

1-Port 10-Gigabit Ethernet SPAs can be installed in subslots 2 and 3 only.

Either a blank filler plate or a functional SPA should reside in every subslot of an SIP during normal operation to maintain cooling integrity. Blank filler plates are available in single-height form only.

It is highly recommended only to use the SFP modules listed as supported in this document. Use of unsupported or unqualified SFP modules may affect reliability of operation.

The interface connectors on the 8-Port Gigabit Ethernet SPA are fiber optic receivers that each support one SFP.

The interface connectors on the 8-Port Gigabit Ethernet SPA are eight individual fiber-optic receivers that support SFP modules. Each port can send and receive traffic using the optical fiber connections.

The small form-factor pluggable (SFP) module is an input/output (I/O) device that plugs into the Gigabit Ethernet ports on the 8-Port Gigabit Ethernet SPA, linking the port with a fiber-optic network.

The SFP module has a receiver port (RX) and a transmitter port (TX) that compose one optical interface. Table 2-4 and Table 2-5 provide SFP module information and specifications.

The 1000BASE-LX/LH (long-wavelength/long-haul) module interfaces fully comply with the IEEE 802.3z 1000BASE-LX standard. However, their higher optical quality allows them to reach 6.2 miles (10 km) over single-mode fiber (SMF) versus the 3.1 miles (5 km) specified in the standard.

The 1000BASE-ZX module must be coupled to single-mode fiber-optic cable, which is the type of cable typically used in long-haul telecommunications applications. The 1000BASE-ZX module does not operate correctly when coupled to multimode fiber, and it is not intended to be used in environments in which multimode fiber is frequently used (for example, building backbones or horizontal cabling).

The 1000BASE-ZX module is intended to be used as a Physical Medium Dependent (PMD) component for Gigabit Ethernet interfaces. It operates at a signaling rate of 1250 Mbaud, transmitting and receiving 8B/10B encoded data.

When shorter lengths of single-mode fiber are used, it may be necessary to insert an inline optical attenuator in the link to avoid overloading the receiver. Use the following guidelines:

The SCE8000-SIP is installed in slot #3 of the Cisco SCE8000 GBE chassis. It hosts up to four single-width, single-height SPA modules. Table 2-6 lists the SCE8000-SIP LED and its status descriptions.

Either one or two 8-port GBE SPAs may be installed. Possible configurations are as follows:

For an illustration of the 8-Port GBE SPA Interface Module refer to Figure 2-5.

The Cisco SCE8000-SIP module already includes an internal electrical bypass, but it is strongly recommended to use the optical bypass module for addressing the following scenarios:

During platform reboot (SW reload)—If the external bypass module is not used, there is a 11-second period during which the link is forced down (cutoff functionality). If any routing or spanning tree protocols are used in the network, this delay may be extended.

The optical bypass module is connected bump-in-the-wire in the traffic link. It is then connected to the Cisco SCE8000 GBE platform with two types of connections:

GBE optical connections for data link traffic — connections from the optical bypass module to one pair of the SPA ports.

Control connection — Connection to the RJ-11 External Bypass connector on the SCE8000-SCM, so the optical bypass is activated if the Cisco SCE8000 GBE platform fails.

Under normal conditions, the bypass module directs traffic to flow via the Cisco SCE8000 GBE GBE. 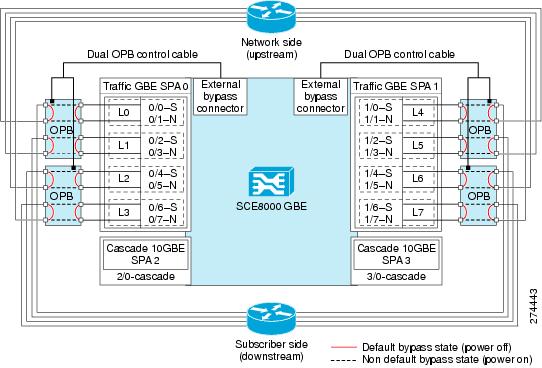 There are two types of optical bypass modules to support different optic types:

The optical bypass module is installed either internally, in slot #4 of the Cisco SCE8000 GBE chassis or in an external mounting panel in the rack.

Up to four optical bypass modules can be mounted internally, supporting inline insertion into all eight links.

The fiber cable type within the Optical Bypass Module area as follows:

Switching time is measured from trigger to stable 90% optical output.

The system fan assembly, located in the chassis, provides cooling air for the installed modules (Figure 2-8). Sensors on the fan assembly and within the system monitor the internal air temperatures. If the air temperature exceeds a preset threshold, the environmental monitor displays warning messages.

If an individual fan within the assembly fails, the FAN STATUS LED turns red. To replace a fan assembly, see Removing and Replacing the Fan Assembly.

The AC-input and DC-input power supplies support redundancy. When power is removed from one supply, the redundant power feature causes the second supply to produce full power.

Power supplies have built-in fans and are completely self-cooling. Air enters from the right of the fan and exits through the left.

Cisco does not ship the entire Cisco SCE8000 GBE documentation set automatically with each system. You must specifically order the documentation as part of the sales order. If you ordered documentation and did not receive it, we will ship the documents to you within 24 hours. To order documents, contact a customer service representative.

To assist you with your installation and to provide a historical record of what was done by whom, photocopy the following Cisco SCE8000 GBE Installation Checklist (Table 2-12). Indicate when each procedure or verification is completed. When the checklist is completed, place it in your site log along with the other records for your new Cisco SCE8000 GBE platform.