A firewall is a device or a set of devices which has been designed to allow or deny the transmissions in a network based on a set of rules. A firewall is used to protect networks from unauthorized access while allowing the authorized communications to take place. Attack prevention on the RV180 and RV180W routers allows administrators to enable protection against various threats.

Step 1. Use the web configuration utility to choose Firewall > Attack Prevention.. The Attack Prevention page opens. There are various check boxes for a variety of attacks mentioned below. Check the appropriate boxes to enable the needed security measures. 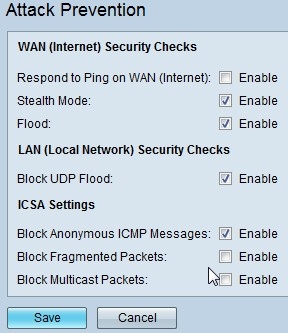 The WAN (Internet) Security Checks block consists of the following fields. Check or Uncheck them to enable or disable the features.

• Respond to Ping on WAN (Internet) — This feature allows the router to respond to Internet Control Message Protocol (ICMP) ping request on a WAN interface. Check this field to enable ICMP replies by the router's WAN interface. This is disabled by default.

• Stealth Mode — Stealth mode makes the router's operation secretive and prevents it from responding to port scans done to the WAN interface. Port scans can be done maliciously by attackers to find out what services are running on a network. This feature is enabled by default.

• Block UDP Flood — This feature does not allow the router to accept more than 500 simultaneous, active UDP connections from one host on the LAN. This feature is enabled by default.

• Block Anonymous ICMP Messages — This feature enables the firewall to secretly block an application without sending the ICMP alert to the sender which is a feature required by the ICSA. This feature is enabled by default.