Traffic requirements in broadband networks are increasing steadily, but the ARPU remains flat. Based upon recent macro-economic trends, analysts predict that service provider revenues will continue to remain flat. Service providers are working to control costs while meeting the increased throughput demand and launching new services. With new multidomain services launching, operators find it difficult to achieve optimum scale within traditional Broadband Network Gateways (BNGs) in terms of both number of subscriber sessions and forwarding capacity and subsequently end up over- or underscaling in one of the dimensions. 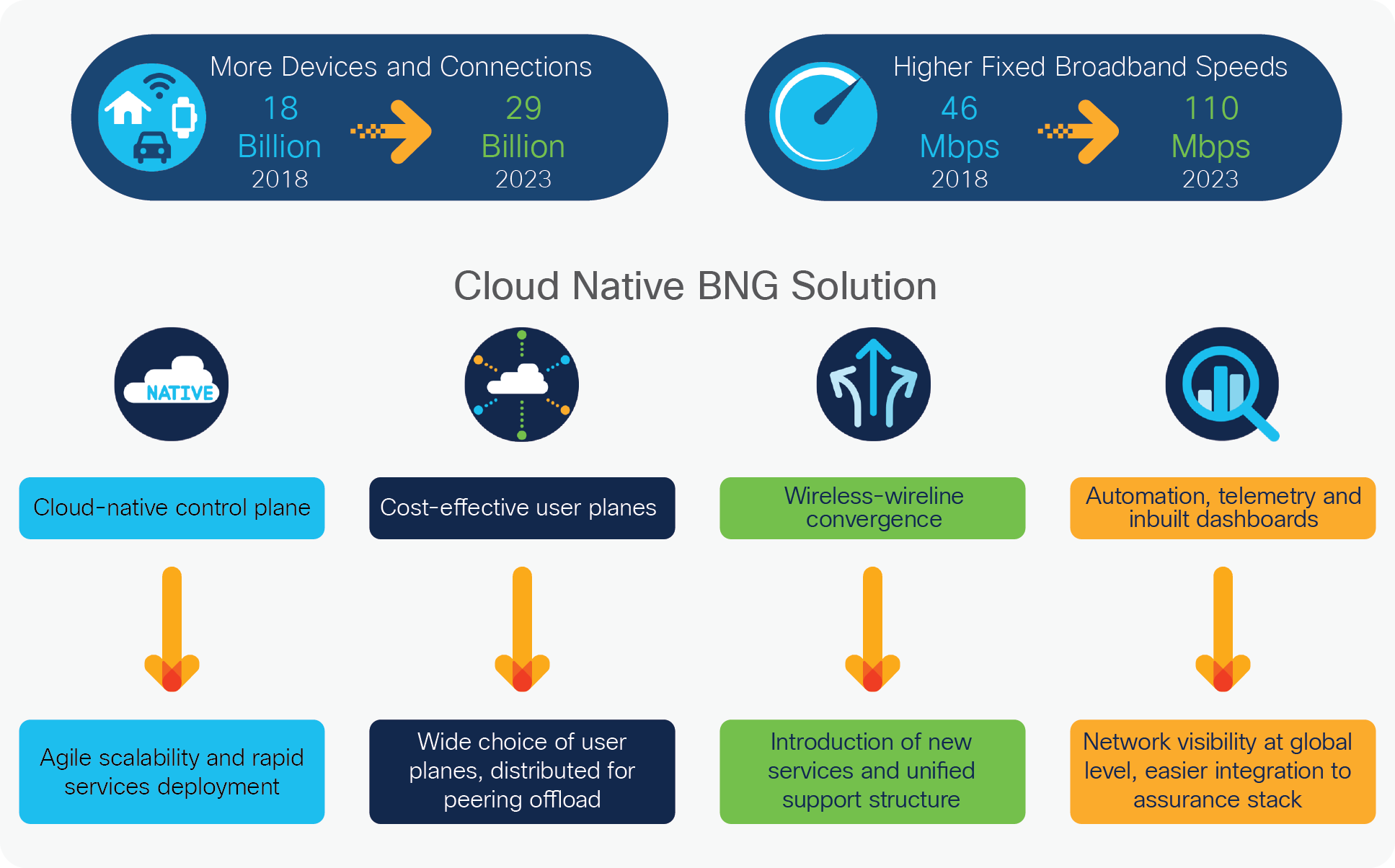 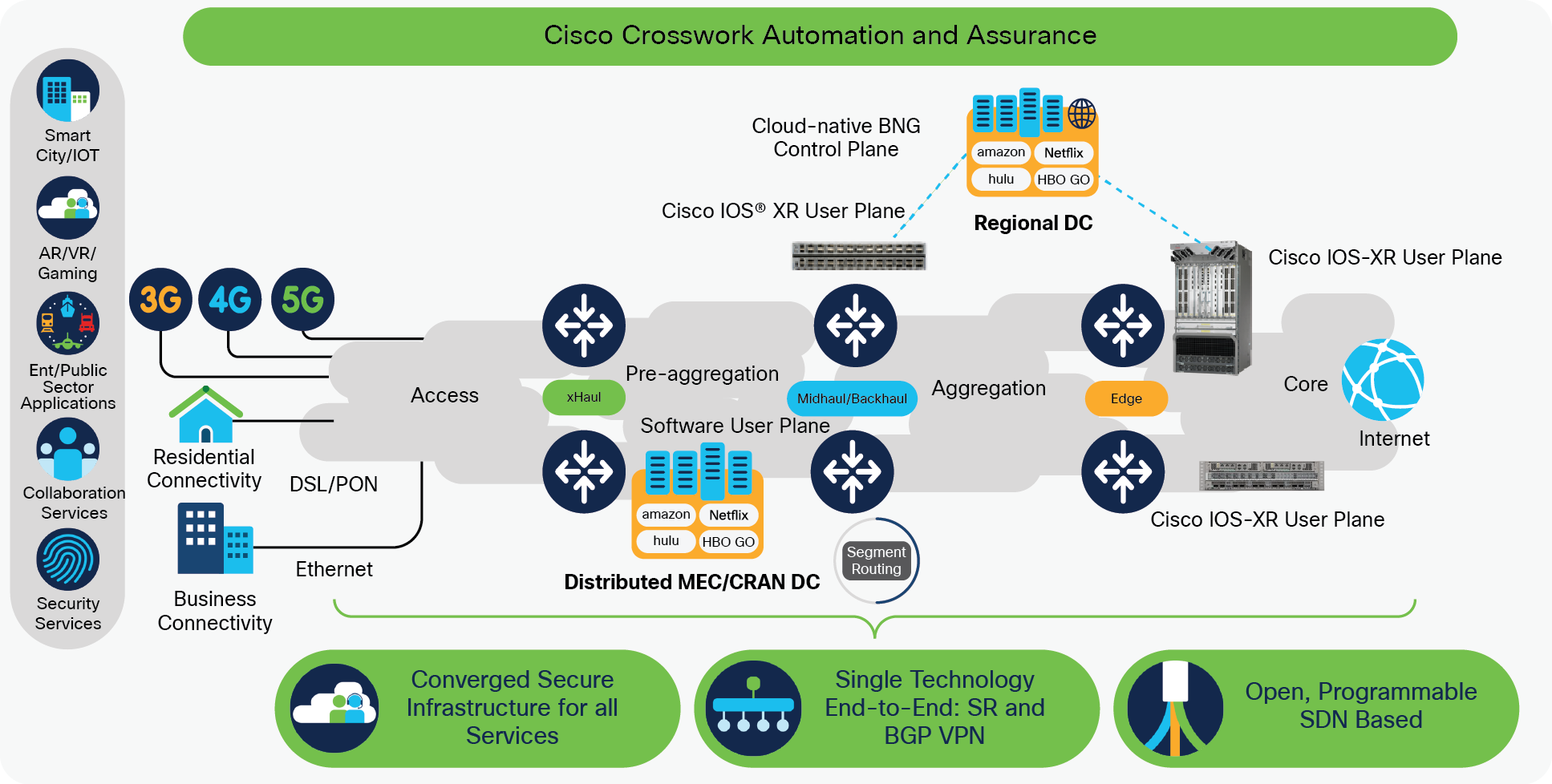 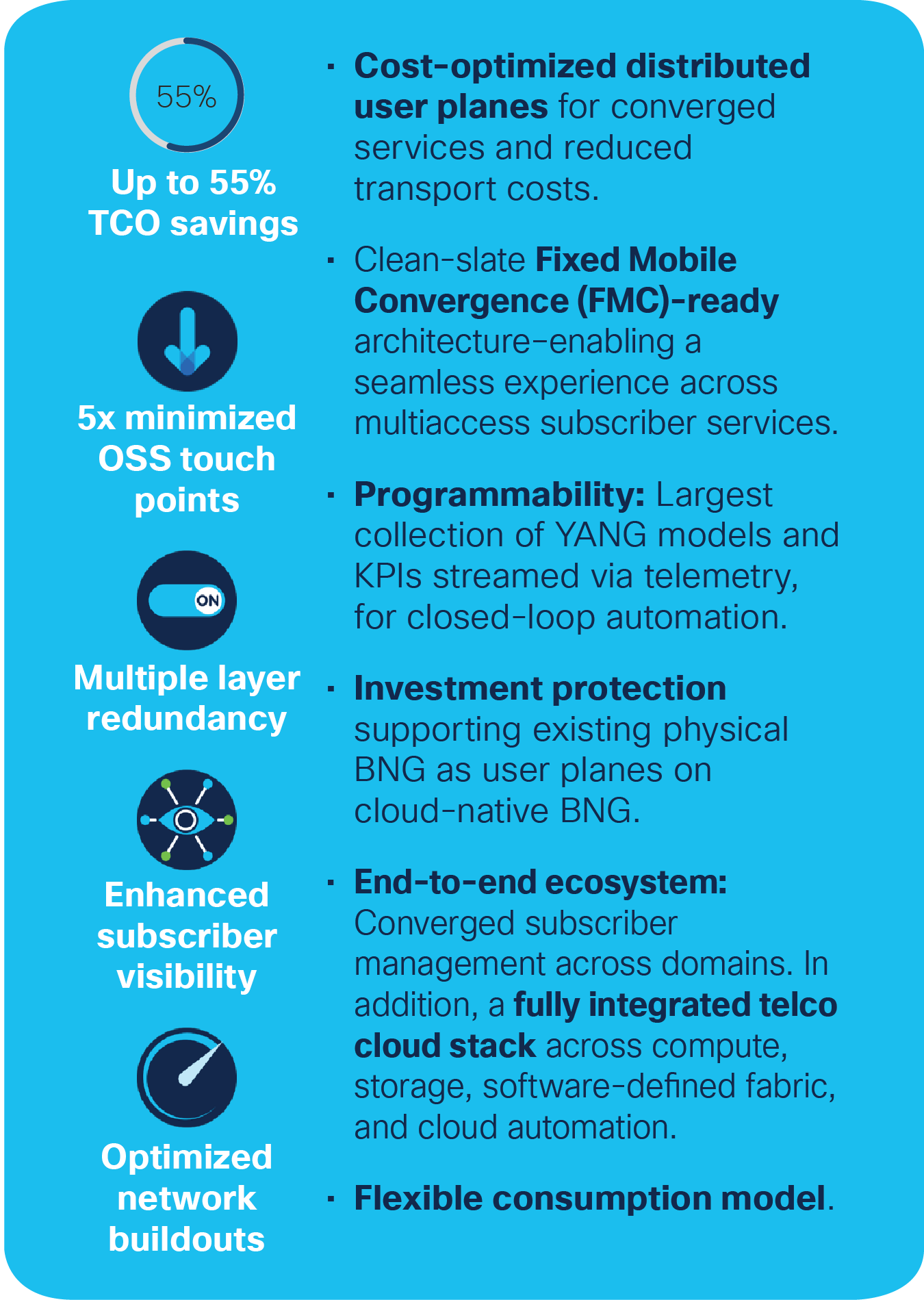 Purchase network capacity as needed in a cost-efficient manner.

The architectural change to separate the control and user plane is defined by the Broadband Forum (BBF) as part of Disaggregated BNG (DBNG), Wireline-Wireless Convergence, and Access and Transport Architecture Tracks. TR-459 standardizes the interfaces for Disaggregated BNG with the aim to ensure interoperability between various control planes and user planes. The Broadband Forum selected Packet Forwarding Control Protocol (PFCP) as the State Control Interface (SCi) or Control and User Plane Separation (CUPS) protocol, which is the same protocol defined by 3GPP for CUPS. PFCP is a well-established protocol for CUPS specially for subscriber management, defined by 3GPP in TS 29.244 for CUPS communication.

This requires an evolution from a traditional BNG design running on a single router to a disaggregated solution based on CUPS, where centralized subscriber management runs on a scalable cloud-native control plane and the forwarding functionality is delivered by the user plane. This distributed design enables simplified operations and efficient scaling and paves the way for the convergence of wireless and wireline services with unified CUPS architecture. A disaggregated BNG architecture has several key advantages such as independent user plane and control plane scaling, independent control and user plane life cycle management, and a centralized control plane for configuration.

The proliferation of streaming content and Over-the-Top (OTT) services has changed the subscriber traffic consumption profile. According to the Cisco Visual Networking Index report for 2017-2022, 70 percent of the traffic on fixed wireline services is video, and it is generated by a handful of content providers. With the increased throughput requirements and changing traffic patterns, operators are adopting a simplified QoS hierarchy. There is a shift from typical 8-queue QoS hierarchy toward collapsed queuing hierarchy with 3 to 4 queues per subscriber. This drives adoption of leaner, more cost-optimized user planes while scaling to satisfy larger bandwidth requirements.

With the focus on CapEx and OpEx reduction, a majority of the operators are looking to converge the fixed line and mobile at multiple layers of the network.

3GPP and BBF are also standardizing the Access Gateway Function (AGF) interfaces and requirements, which enables the 5G Residential Gateways (5G-RG) to use the existing Fixed Access Network for bandwidth augmentation. AGF also acts as proxy for the existing residential gateways (FN-RG) to connect to the 5G packet core, which provides the convergence and also enables using the various services behind the combined User Plane Function (UPF).

For a proper return on investment for service providers who are offering both mobile and fixed line services, the 5G network buildout must include a plan to converge fixed and mobile services on a common xHaul network.

Efficient placement of services between distributed and centralized data centers based on application latency, quality of service, and bandwidth requirements is necessary. Matured virtualization and cloud-native infrastructure allows the operators to have compute resources located deeper into the network, allowing flexible deployments of VNFs/CNFs along with physical network elements. 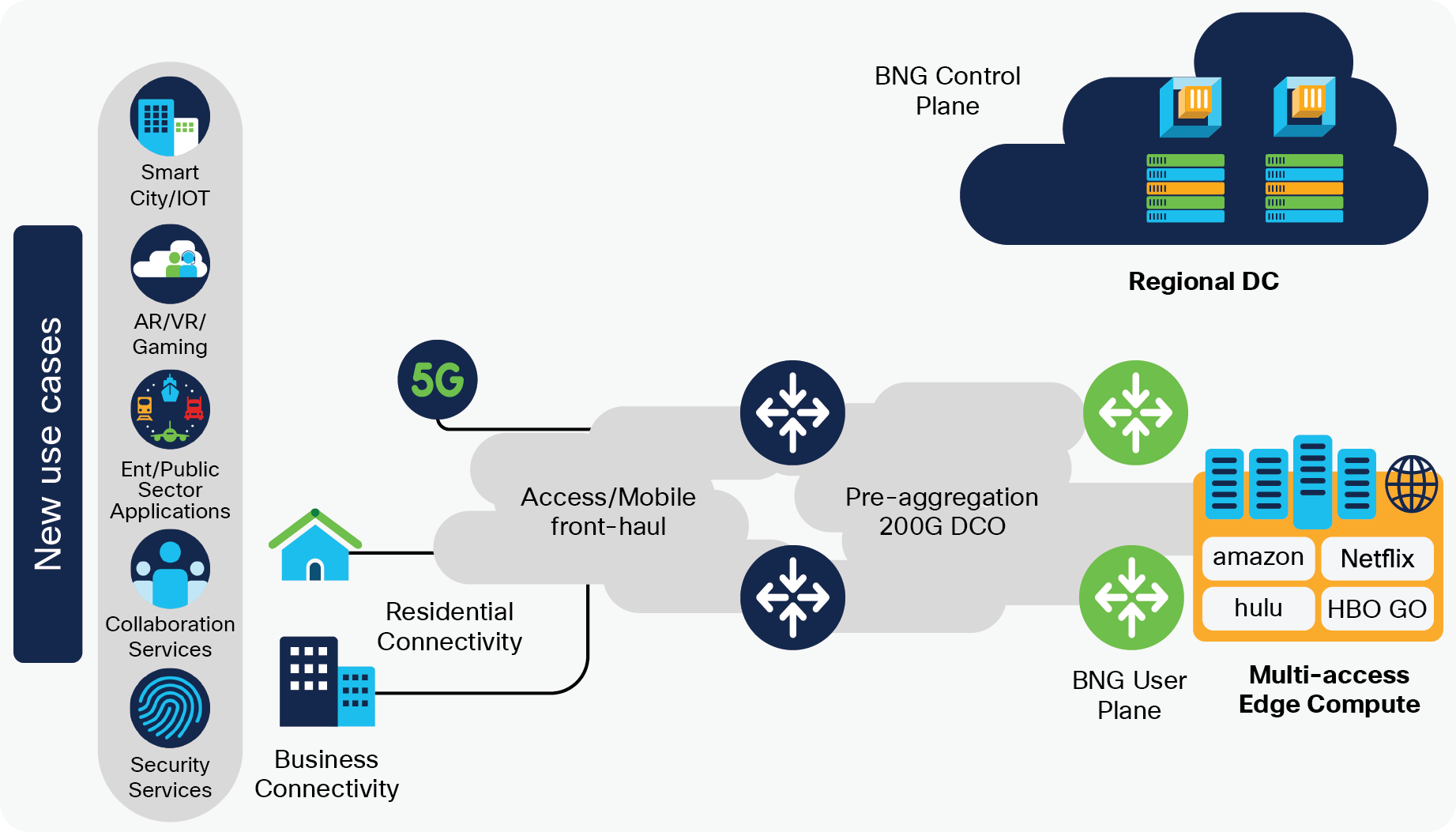 Network slicing enables the creation of several logical networks, independent of each other, serving the precise purpose for a customer or set of users. Slicing involves securing the cloud as well as network resources, in isolation, and tying it all together form the logical network. With a focus on several use cases related to healthcare, industrial automation, and government enterprises, network slicing is needed to provide low-latency edge services, Service-Level Agreement (SLA)–based networks, and optimization of back-haul networks.

The Cisco proposed solution of cloud native BNG is based on standardized disaggregated BNG architecture, with a cloud-native and scalable control plane ready to be inserted with any virtualization infrastructure. It is designed and developed with a clean-slate approach, as a composition of multiple microservices for elasticity, resiliency, portability, and composability.

Cisco Crosswork provides a suite of automation products for orchestration, provisioning, infrastructure activation, and analytics. The Crosswork Assurance suite handles performance and fault management for Cisco cloud-native BNG and Cisco 5G ultra core network functions. A tightly coupled automation and assurance stack delivers complete agility in a cost-efficient manner, allowing cloud-native components to scale up or scale down based on the assurance triggers. 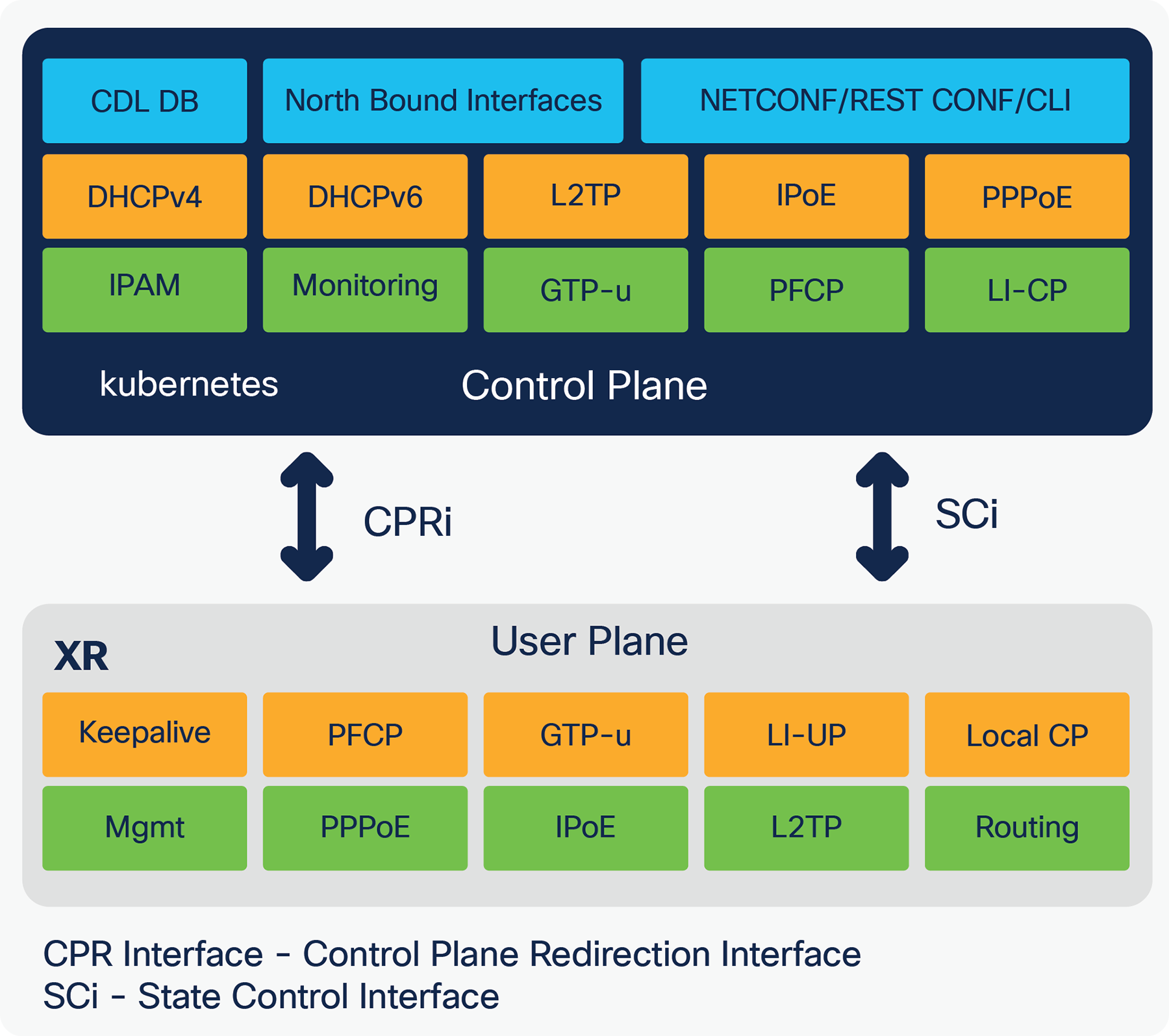 All the components of the solution can effectively scale in tandem, with the model-driven programmability interfaces exposed to the automation stack. With the subscriber, subscriber data, and subscriber database all programmed using well-defined YANG models, service providers can capitalize on delivering services and functions based on real-time network and subscriber insights.

One of the solution pillars of the Cisco cloud native BNG is a Subscriber Management Infrastructure (SMI) for the control plane. SMI provides the infrastructure blocks for various subscriber management network functions such as:

These infrastructure blocks will allow the convergence of various northbound systems like policy and charging, automation, service orchestration, and service assurance across various types of subscriber stacks.

Built on a cloud-native infrastructure stack, the cloud-native BNG control plane is hardware agnostic and compatible with virtualized as well as bare-metal systems and portable across multiple environments. Pure cloud-native architecture is targeted for faster rollout of features and canary upgrades, with a view of operators moving to a Continuous Integration and Deployment (CI/CD) model. The cloud-native BNG control plane architecture simplifies the Session Redundancy Group (SRG) mechanism and supports multiple redundancy mechanisms—within the cluster as well as across clusters with geo-redundancy.

With the user plane freed up of subscriber state management overhead, the architecture gets simplified and will allow the user planes to be more distributed, with minimal integration efforts. A Service Provisioning Agent (SPA) is used to encapsulate and decapsulate the communication messages for the standardized interfaces between user plane and control plane. The SPA is bundled with existing Cisco IOS® XR images so that there is a minimal configuration requirement and to transform from an integrated BNG router into a cloud-native BNG user plane. This serves as investment protection for the already-deployed integrated BNGs in the network. While existing session redundancy mechanisms are still supported with cloud-native BNG user planes, the new architecture allows more redundancy options of Warm Standby (n:1).