This document provides details about configuring Parallel Redundancy Protocol (PRP) on the Cisco Industrial Ethernet 2000U Series Switches (IE 2000U).

To recover from network failures, redundancy can be provided by network elements connected in mesh or ring topologies using protocols like RSTP, REP, or MRP, where a network failure causes some reconfiguration in the network to allow traffic to flow again (typically by opening a blocked port). These schemes for redundancy can take between a few milliseconds to a few seconds for the network to recover and traffic to flow again.

PRP uses a different scheme, where the end nodes implement redundancy (instead of network elements) by connecting two network interfaces to two independent, disjointed, parallel networks (LAN-A and LAN-B). Each of these Dually Attached Nodes (DANs) then have redundant paths to all other DANs in the network.

The DAN sends two packets simultaneously through its two network interfaces to the destination node. A redundancy control trailer (RCT), which includes a sequence number, is added to each frame to help the destination node distinguish between duplicate packets. When the destination DAN receives the first packet successfully, it removes the RCT and consumes the packet. If the second packet arrives successfully, it is discarded. If a failure occurs in one of the paths, traffic continues to flow over the other path uninterrupted, and zero recovery time is required.

Non-redundant endpoints in the network that attach only to either LAN-A or LAN-B are known as Singly Attached Nodes (SANs).

A Redundancy Box (RedBox) is used when an end node that does not have two network ports and does not implement PRP needs to implement redundancy. Such an end node can connect to a RedBox, which provides connectivity to the two different networks on behalf of the device. Because a node behind a RedBox appears for other nodes like a DAN, it is called a Virtual DAN (VDAN). The RedBox itself is a DAN and acts as a proxy on behalf of its VDANs. 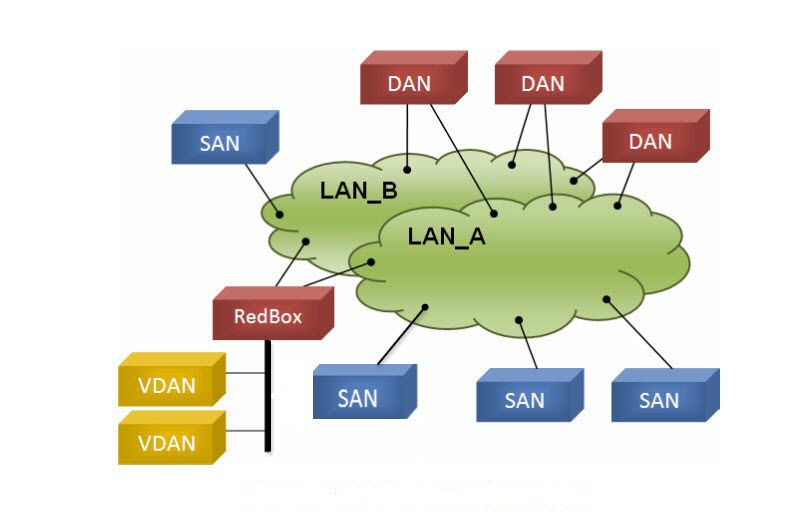 Role of the Switch

The IE 2000U switch implements RedBox functionality. A switch operating with PRP has a Gigabit Ethernet or Fast Ethernet uplink port connection to each of the two LANs.

The higher numbered port is the secondary port and connects to LAN_B. The PRP channel remains up as long as at least one of these member ports remains up and sends traffic. When both member ports are down, the channel is down.

Traffic egressing the RedBox PRP channel group can be mixed, that is, destined to either SANs (connected only on either LAN-A or LAN-B) or DANs. To avoid duplication of packets for SANs, the switch learns source MAC addresses from received Supervision frames for DAN entries and source MAC addresses from non-PRP (regular traffic) frames for SAN entries and maintains these addresses in the node table. When forwarding packets out the PRP channel to SAN MAC addresses, the switch looks up the entry and determines which LAN to send to rather than duplicating the packet.

A RedBox with VDANs needs to send supervisory frames on behalf of those VDANs. For traffic coming in on all other ports and going out PRP channel ports, the switch learns source MAC addresses, adds them to the VDAN table, and starts sending Supervisory frames for these addresses. Learned VDAN entries are subject to aging.

Creating a PRP Channel and Group

To create and enable a PRP channel and group on the switch, follow these steps:

This example shows how to create a PRP channel on the switch with a VLAN ID of 2.

This example shows how to create a PRP channel on a switch configured with Layer 3.

Adding Static Entries to the Node and VDAN Tables

Follow this procedure to add a static entry to the node or VDAN table.

See Mixed Traffic and Supervisory Frames and the guidelines for node and VDAN tables in Guidelines and Limitations.

Configure the PRP channel and group as described in Creating a PRP Channel and Group.

The clear prp node-table and clear prp vdan-table commands clear only dynamic entries. To clear static entries, use the no form of the nodeTableMacaddress or vdanTableMacaddress commands shown in Adding Static Entries to the Node and VDAN Tables.

PTP traffic traverses PRP within LAN A only. Follow the steps in this procedure to enable PTP on LAN A.

Disabling the PRP Channel and Group

The following example shows the output for show prp channel when one of the interfaces in the PRP channel is down:

The following example shows how to display the PRP node table and PRP VDAN table:

PRP is supported on IE 2000U, IE 4000, IE 4010, and IE 5000 switches. Not all versions of IE 2000U support the PRP feature, and not all industrial platforms support all features. The following table lists the PRP features supported by each platform.