The Cisco AnyConnect Secure Mobility Client for Android provides seamless and secure remote access to enterprise networks. AnyConnect allows installed applications to communicate as though connected directly to the enterprise network. AnyConnect is a sophisticated networking application that also allows you to set preferences, control the operation of AnyConnect, and use diagnostic tools and facilities on your device as recommended by your administrator.

AnyConnect may be used in your enterprise in conjunction with Mobile Device Management software. If so, work with your administrator to abide by device management rulessince these rules may include restricting VPN access to a set of approved applications. Your organization may provide additional documentation on using AnyConnect for Android.

Your Android app store provides the application for initial installation and all upgrades. The Cisco Adaptive Security Appliance (ASA) is the secure gateway that admits access to the VPN, but it does not support updates of AnyConnect for mobile devices.

Full support for Cisco AnyConnect on Android is provided on devices running Android 4.0 (Ice Cream Sandwich) through the latest release of Android.

For the Network Visibility Module (NVM) capabilities, Samsung devices that are running Samsung Knox 2.8 or later (including 3.2), which requires Android 7.0 or later, are required. For configuration of NVM, the AnyConnect Profile Editor from AnyConnect 4.4.3 or later is also required. Earlier releases do not support mobile NVM configurations.

AnyConnect for Android is available for download only from the Android Market for your Android device, or from Amazon for Kindle devices. You cannot download it from the Cisco website or after connecting to a secure gateway.

To install AnyConnect for Android, follow the normal procedures for downloading, installing or upgrading apps on your device.

Follow instructions provided to you by your administrator to configure and establish a VPN connection to your network.

The following permissions are declared in the Android manifest file for AnyConnect operation:

A connection entry specifies a secure gateway that provides access to your private network, as well as other connection attributes.

Add a VPN connection entry to identify the VPN secure gateway to which you want to connect.

Change a VPN connection entry to correct a configuration error or comply with an IT policy change.

About Certificates on Your AndroidDevice

Once imported, the certificate can be associated with a particular connection entry or selected automatically during connection establishment to authenticate.

You can delete user certificates from the AnyConnect store if they are no longer needed for authentication.

A server certificate received from the secure gateway during connection establishment automatically authenticates that server to AnyConnect, if and only if it is valid and trusted. Otherwise:

Server certificates in the AnyConnect store can be deleted if they are no longer needed for authentication.

Your administrator will provide you with a hyperlink to install a certificate on your device.

Set External Control to either Prompt or Enable within the AnyConnect settings.

The following explains all possible options for manually importing a user certificate to the AnyConnect store for VPN authentication purposes.

Obtain the specific certificate import procedures from your administrator.

Your administrator configures a secure gateway to enable the distribution of certificates and provides you with connection information to that secure gateway.

The secure gateway downloads the certificate to your device. Your VPN session is disconnected, and you receive the message that certificate enrollment was successful.

View user and server certificates that have been imported into the AnyConnect certificate store, and Android system certificates.

Certificates are deleted individually or cleared from the AnyConnect certificate store all at once.

Respond to Another App

To protect your device, AnyConnect alerts you when an external app attempts to use AnyConnect. This occurs when the AnyConnect application preference External Control is set to Prompt.

Ask your administrator whether to tap Yes in response to the following prompts:

While an AnyConnect VPN is connected, you are unable to retrieve or send Multimedia (MMS) messages. If attempted and blocked, an MMS notification icon is displayed in the status bar. To acknowledge this notification:

You have control over when AnyConnect launches on your device. By default, AnyConnect does not automatically launch at device startup. If checked, Launch at Startup is enabled.

Control the External Use of AnyConnect

This application setting determines if AnyConnect blocks connections when it cannot identify the secure gateway. This protection is ON by default; it can be turned OFF, but this is not recommended.

AnyConnect uses the certificate received from the server to verify its identify. If there is a certificate error due to an expired or invalid date, wrong key usage, or a name mismatch, the connection is blocked.

When this setting is ON, a blocking Untrusted VPN Server! notification alerts you to this security threat.

Your administrator will inform you if you need to enable FIPS mode on your mobile device for connectivity to your network.

Your administrator will inform you if you need to enable OCSP Revocation on your mobile device for connectivity to your network.

If selected, when authenticating remote security gateways, AnyConnect disallows any certificate that it cannot verify automatically without user intervention. Instead of prompting the user to accept these certificates, the client fails to connect. This setting overrides Block Untrusted Server.

If not selected, the client prompts the user to accept the certificate or not. This is the default behavior.

Your administrator will inform you if you need to enable Strict Certificate Trust on your mobile device for connectivity to your network.

AnyConnect provides widgets to add to your home screen:

The instructions for placing a widget may vary, depending on the device and the Android version that you are using. Example instructions are provided.

AnyConnect retains only one VPN Client Profile on the Android device at a time. The following are some key scenarios that cause the current profile, if it exists, to be replaced or deleted:

View or delete the AnyConnect profile currently on the device, or import a new one.

A profile file must be present on the Android device to import it in this way. Your administrator provides you with the name of the profile file to be installed on your device.

The installed language is determined by the locale specified in Settings > Language and Keyboard > Select locale. AnyConnect UIs and messages are translated as soon as AnyConnect starts.

AnyConnect uses the language specification, then the region specification, to determine the best match. For example, after installation, a French-Switzerland (fr-ch) locale setting results in a French-Canadian (fr-ca) display.

After installation, localization data for languages not supported in the AnyConnect package is imported by:

Display the AnyConnect Version and Licenses

Tap the link in the About window to open the latest version of this guide.

By default, AnyConnect reveals its status by changing its icon in the Android status bar at the top of the Android window. The icon indicates the current state of the AnyConnect connection: 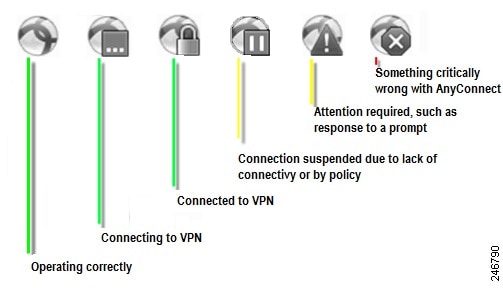 AnyConnect records statistics when a VPN connection is present.

Detailed statistics include the following values:

I received a tun.ko error message

A tun.ko module is required if it is not already compiled into the kernel. If it is not included on the device or compiled with the kernel, obtain or build it for your corresponding device kernel and place it in the /data/local/kernel_modules/ directory.

I cannot edit/delete some connection entries

Your administrator defined these connection entries in the AnyConnect Profile. See Viewing and Managing the AnyConnect profile for instructions on deleting these profiles.

Internet connectivity issues, a low-cell signal level, and a congested network resource are typical causes of timeouts and unresolved host errors. Try moving to an area with a stronger signal or use WiFi. If a Wi-Fi network is within reach, try using your device Settings app to establish a connection to it first. Retrying multiple times in response to timeouts often results in success.

Certificate-based authentication does not work

Ask your administrator if the VPN secure gateway is configured and licensed to permit mobile connections.

AnyConnect package fails to install from the Market

Ensure that the device is listed as one of the Supported Android Devices.

If you attempt to install a brand-specific AnyConnect package on devices that are not supported, they receive this message. Review the list of supported Android devices and instructions for installing or upgrading AnyConnect to download the proper AnyConnect package for your device.

AnyConnect error, “Could not obtain the necessary permissions to run this application. This device does not support AnyConnect.”

AnyConnect does not work on this device. Review the list of supported Android devices and instructions for installing or upgrading AnyConnect to download the proper AnyConnect package for your device.

Cannot email logs because of a network connectivity issue

Try another Internet-accessible network. Save the log messages in a draft email message if you do not have network connectivity or you need to reset the device.

AnyConnect frequently connects by itself

This may be due to your Trusted Network Detection / Automatic VPN Policy. Disable the TND application preference in the AnyConnect settings to turn this functionality off.

Authentication using a one time password is not working

Due to an Android issue, when pasting text from the clipboard, a space is inserted in front of the text. In AnyConnect, when copying text such as a one time password, the user has to delete this erroneous white space.

Guidelines and Limitations for AnyConnect on Android