Note: You need to have valid Cisco user credentials in order to download this software from Cisco.com.

Compatibility between ASA and ASDM

Refer the below link which is updated with the compatibility and cisco recommended ASDM release for each version of ASA.

Refer the below link which provides the upgrade path for ASA. Some versions require an interim upgrade before you can upgrade to the latest version.

Complete these steps to upgrade a software image on the ASA 5500 using ASDM.

1. If ASA is in Single context mode. Select Tools > Upgrade Software from Local Computer... from the Home window of the ASDM.

If ASA is running Multiple context mode, the Upgrade Software from Local Computer option under Tools is available only from System context. 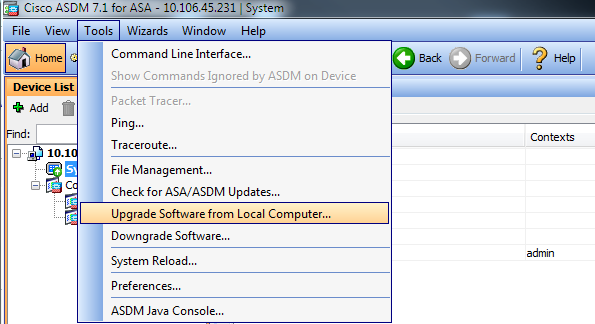 2. Select ASA as the image type to upload from the drop-down menu.

3. Click Browse Local Files... or type the path in the Local File Path field to specify the location of the software image on your PC.

5. A Browse Flash Dialog window appears with the file name entered automatically. If the file name does not appear, enter it manually in the File Name field. Click OK when you are done.

6. Once both the local and remote file names are specified, click Upload Image.

7. A Status window appears while ASDM writes the image to Flash. Once completed, an Information window appears that indicates a successful upload and if the image should be set as boot image. Select Yes 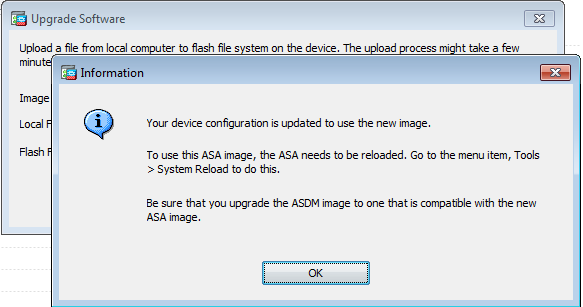 Click OK in the Information window and then Close in the Upload Image from Local PC window.

8. Choose Tools > System Reload from the Home window to reload the device. 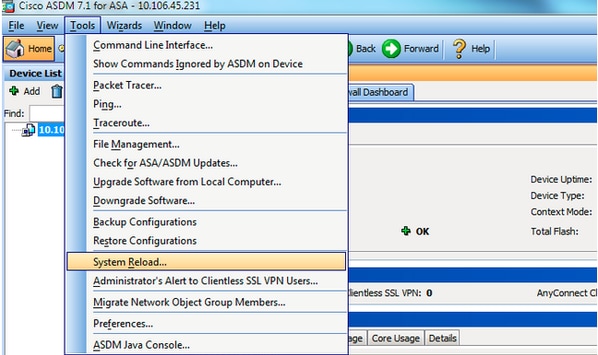 A new window appears that asks you to verify the details of the reload. Select Save the running configuration at the time of reload and then choose a time to reload.

You can also specify whether or not the device should force a reload immediately if a scheduled reload fails. Check On Reload failure, force an immediate reload after and then specify a maximum hold time. This is the amount of time that the security appliance waits to notify other subsystems before a shutdown or reboot. After this time elapses, a quick (forced) shutdown/reboot occurs. Click Schedule Reload. 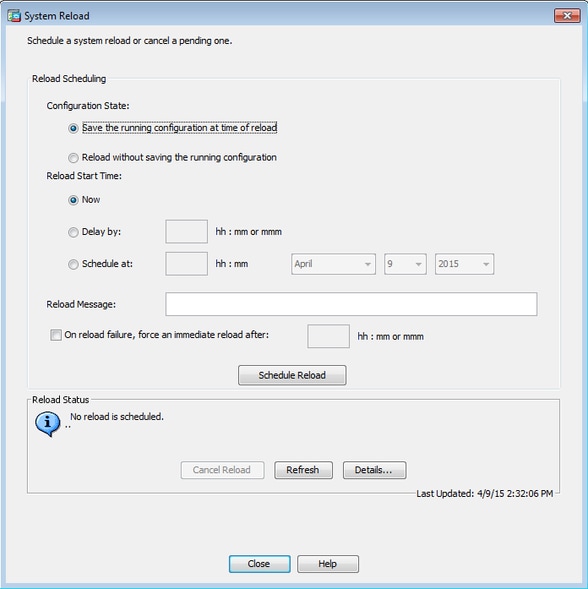 Once the reload is in progress, a Reload Status window appears that indicates that a reload is being performed. An option to exit ASDM is also provided. 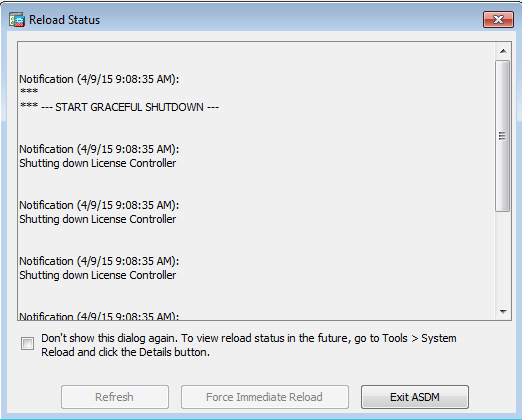 Complete these steps to upgrade a software image on the ASA 5500 using ASDM.

1. Select Tools > Upgrade Software from Local Computer... from the Home window of the ASDM.

2. Select ASDM as the image type to upload from the drop-down menu.

3. Click Browse Local Files... or type the path in the Local File Path field to specify the location of the software image on your PC.

A Browse Flash Dialog window appears with the file name entered automatically. If the file name does not appear, enter it manually in the File Name field. Click OK when you are done.

4. Click OK once the image is updated with the new image.

5. Select File > Save Running Configuration to Flash from the Home window of the ASDM.

Exit the ASDM and login back again to manage the ASA with the upgraded ASDM image.

Upgrading the ASA and ASDM by downloading image directly from CCO

Complete these steps to upgrade a ASA and ASDM image directly from CCO.

1. Select Tools > Check for ASA/ASDM Updates... from the Home window of the ASDM. 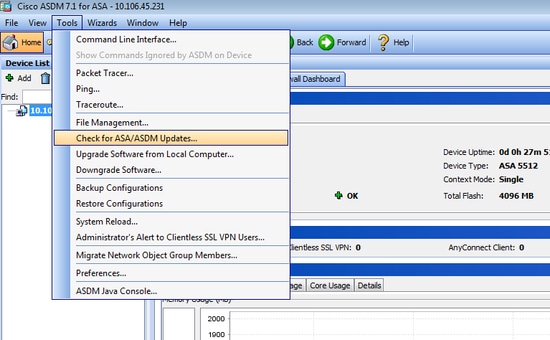 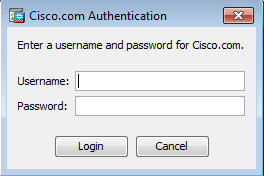 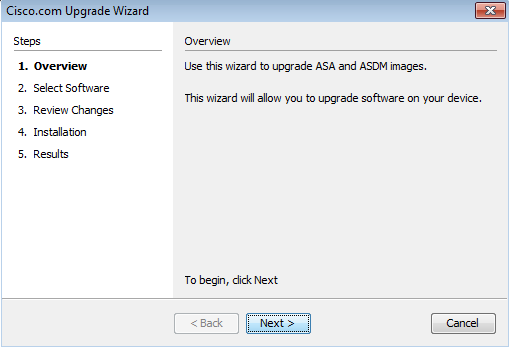 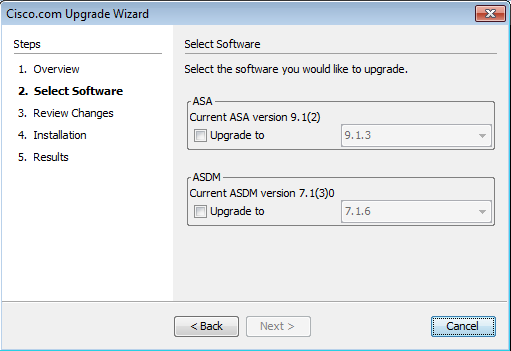 5. In the ASA version dropdown, select the version to which the ASA upgrade has to be performed. 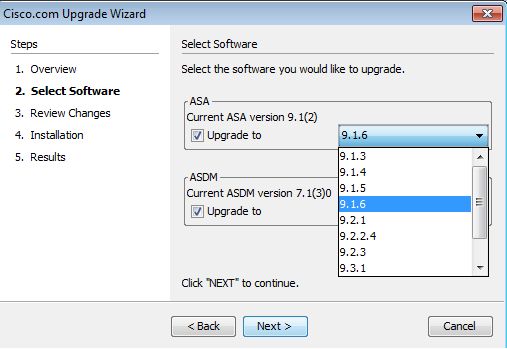 6. In the ASDM version dropdown, select the version to which the ASDM upgrade has to be performed. Click Next once the appropriate versions are selected. 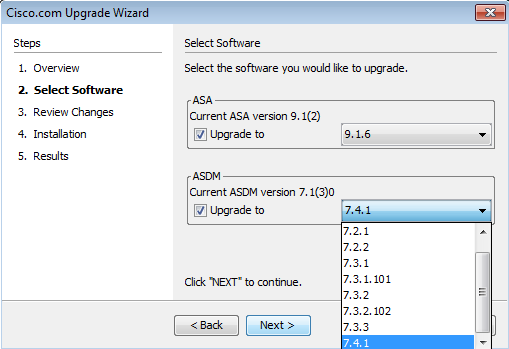 7. In the Review Changes section, Review the changes and Click Next . 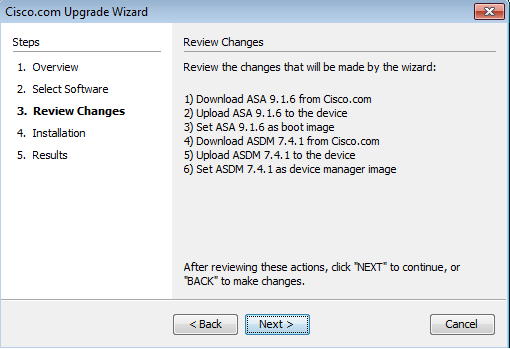 8. The Installation of the images start and the overall progress can be seen as below. Once completed click Finish.
In the Results section, check the "Save configuration and reload device now" option. Click Finish. 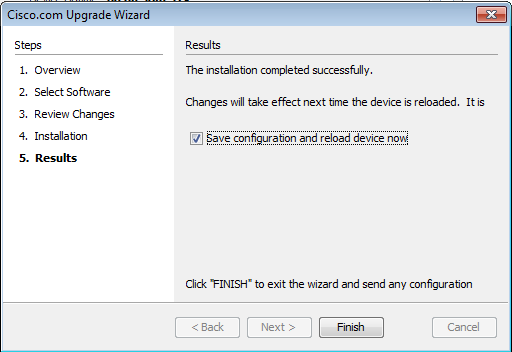 9. The Reload status screen appears while the device reloads. 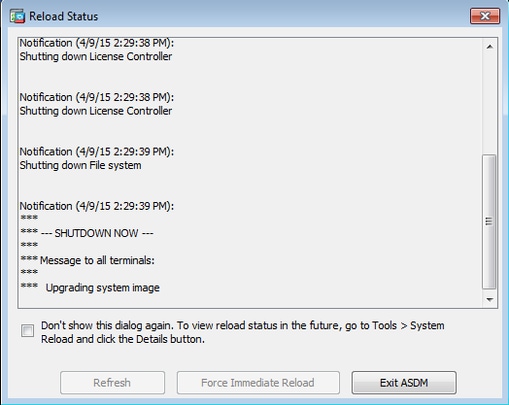 10. Click "Exit ASDM" and login back again once the device comes up after reload.

A TFTP server is required to upgrade or downgrade a software image as well as an ASDM image for a ASA. Refer to TFTP Server Selection and Use in order to learn more about TFTP server selection.

This is the output from the copy tftp flash command:

For multiple context mode, perform these steps in the system execution space.

The location is either an IP address or a name that resolves to an IP address via the security appliance naming resolution mechanism, which is currently static mappings via the name and names commands. The security appliance must know how to reach this location via its routing table information. This information is determined by the IP address, the route, or the RIP commands. This depends on your configuration.

The pathname can include any directory names besides the actual last component of the path to the file on the server. The pathname cannot contain spaces. If a directory name has spaces set to the directory in the TFTP server instead of in the copy tftp flash command, and if your TFTP server is configured to point to a directory on the system from which you download the image, you only need to use the IP address of the system and the image filename. The TFTP server receives the command and determines the actual file location from its root directory information. The server then downloads the TFTP image to the security appliance.

These commands are needed to upgrade the software image as well as the ASDM image and make it as a boot image at the next reload.

Note: When you try to upgrade the image on the ASA from an FTP server, you can use the copy ftp flash command. This command allows you to specify parameters, such as remote IP address and source file name. This procedure is similar to TFTP. However, one limitation with is that you can not modify the remote IP/source interface (like you can with TFTP). In TFTP mode, options specified with the tftp-server command can be pulled and executed. But with FTP, there is no such option. The source interface should always be the outside by default, which cannot be modified. That is, the FTP server should be reachable from the outside interface.

Use this section to confirm that your software upgrade was successful.

After the ASA reloads and you have successfully logged into ASDM again, you can verify the version of the image that runs on the device. See the General tab on the Home window for this information.

These CLI commands are used in order to verify the upgrade: