The rapid rise in encrypted traffic is changing the threat landscape. As more businesses become digital, a significant number of services and applications are using encryption as the primary method of securing information. Gartner estimates that more than 80% of enterprises’ web traffic is encrypted in 2019.1 In fact, as of May 2019, 94% of all Google web traffic is encrypted.2 And nearly 80% of web pages loaded by Firefox use HTTPS.3

Encryption technology has enabled much greater privacy and security for enterprises that use the Internet to communicate and transact business online. Mobile, cloud, and web applications rely on well-implemented encryption mechanisms, using keys and certificates to ensure security and trust. However, businesses are not the only ones to benefit from encryption. Threat actors have leveraged these same benefits to evade detection and to secure their malicious activities.

Visibility across the network is getting increasingly difficult, and our traditional means of detection cannot assume that data is available for inspection. We need to be able to simultaneously assess how much of our digital business is protected and unprotected by encryption while also assessing what traffic is malicious and what is benign.

More than 70% of malware campaigns in 2020 will use some type of encryption to conceal malware delivery, command-and-control activity, or data exfiltration.1 And 60% of organizations will fail to decrypt HTTPS efficiently, missing critical encrypted threats.1

Table 1.        New threat vectors based on nature of encrypted traffic

The majority of organizations today do not have a solution to detect malicious content in encrypted traffic. They lack the security tools and resources to implement a solution that can be deployed throughout their network infrastructure without slowing down the network.

Traditional threat inspection with bulk decryption, analysis, and re-encryption is not always practical or feasible, for performance and resource reasons. Also, it compromises privacy and data integrity.

On any given day, no one knows how much of their digital business is in the clear versus encrypted. If traffic is encrypted, the encryption is typically done to meet compliance requirements that mandate specific security policies.

Traditional flow monitoring provides a high-level view of network communications by reporting the addresses, ports, and byte and packet counts of a flow. In addition, intraflow metadata, or information about events that occur inside of a flow, can be collected, stored, and analyzed within a flow monitoring framework. This data is especially valuable when traffic is encrypted, because deep-packet inspection is no longer viable. This enhanced intraflow metadata is derived by using new types of data elements or telemetry that are independent of protocol details, such as the lengths and arrival times of messages within a flow. These data elements have the attractive property of applying equally well to both encrypted and unencrypted flows.

Encrypted Traffic Analytics4 focuses on identifying malware communications in encrypted traffic through passive monitoring, the extraction of relevant data elements, and a combination of behavioral modeling and machine learning with cloud-based global visibility.

Transport Layer Security (TLS) is a cryptographic protocol that provides privacy for applications. TLS is usually implemented on top of common protocols such as HTTP for web browsing or Simple Mail Transfer Protocol (SMTP) for email. HTTPS is the use of TLS over HTTP. This is the most popular way of securing communication between a web server and client and is supported by most major web servers.

●      Initial Data Packet (IDP): IDP is used to obtain packet data from the first packet of a flow. It allows extraction of interesting data such as an HTTP URL, DNS hostname/address, and other data elements. The TLS handshake is composed of several messages that contain interesting, unencrypted metadata used to extract data elements such as cipher suites, TLS versions, and the client’s public key length.

●      Sequence of Packet Lengths and Times (SPLT): SPLT conveys the length (number of bytes) of each packet’s application payload for the first several packets of a flow, along with the interarrival times of those packets.

SPLT can be represented as an array of packet sizes (in bytes) along with an array of times (in ms) representing the time since the previous packet was observed.

Appendix A shows a detailed table of new data elements.

In the NetFlow architecture, data is transmitted from exporter to collector in sets of records. Each record in a data set has the same format, which is specified by its template. The data record consists of a series of NetFlow information elements or “fields,” and a specific ID value is assigned to each field. The ID values for information elements may be globally defined and archived by the Internet Assigned Numbers Authority (IANA), or they may be enterprise specific and defined by individual organizations.

NetFlow templates use several globally defined elements administered by IANA. Some of the global elements, such as IP addresses and Layer 4 port numbers, form a familiar 5-tuple that is used as a unique flow identifier (flow key). Additional elements are used to report basic packet/octet statistics and timestamps.

Secure Network Analytics maintains a global risk map—a very broad behavioral profile about servers on the Internet, identifying servers that are related to attacks, may be exploited, or may be used as a part of an attack in the future (Figure 3). This is not a blacklist, but a holistic picture from a security perspective. Secure Network Analytics analyzes the new encrypted traffic data elements in enhanced NetFlow by applying machine learning and statistical modeling. The global risk map and Encrypted Traffic Analytics data elements reinforce using advance security analytics. Rather than decrypting the traffic, Secure Network Analytics uses machine learning algorithms to pinpoint malicious patterns in encrypted traffic to help identify threats and improve incident response. 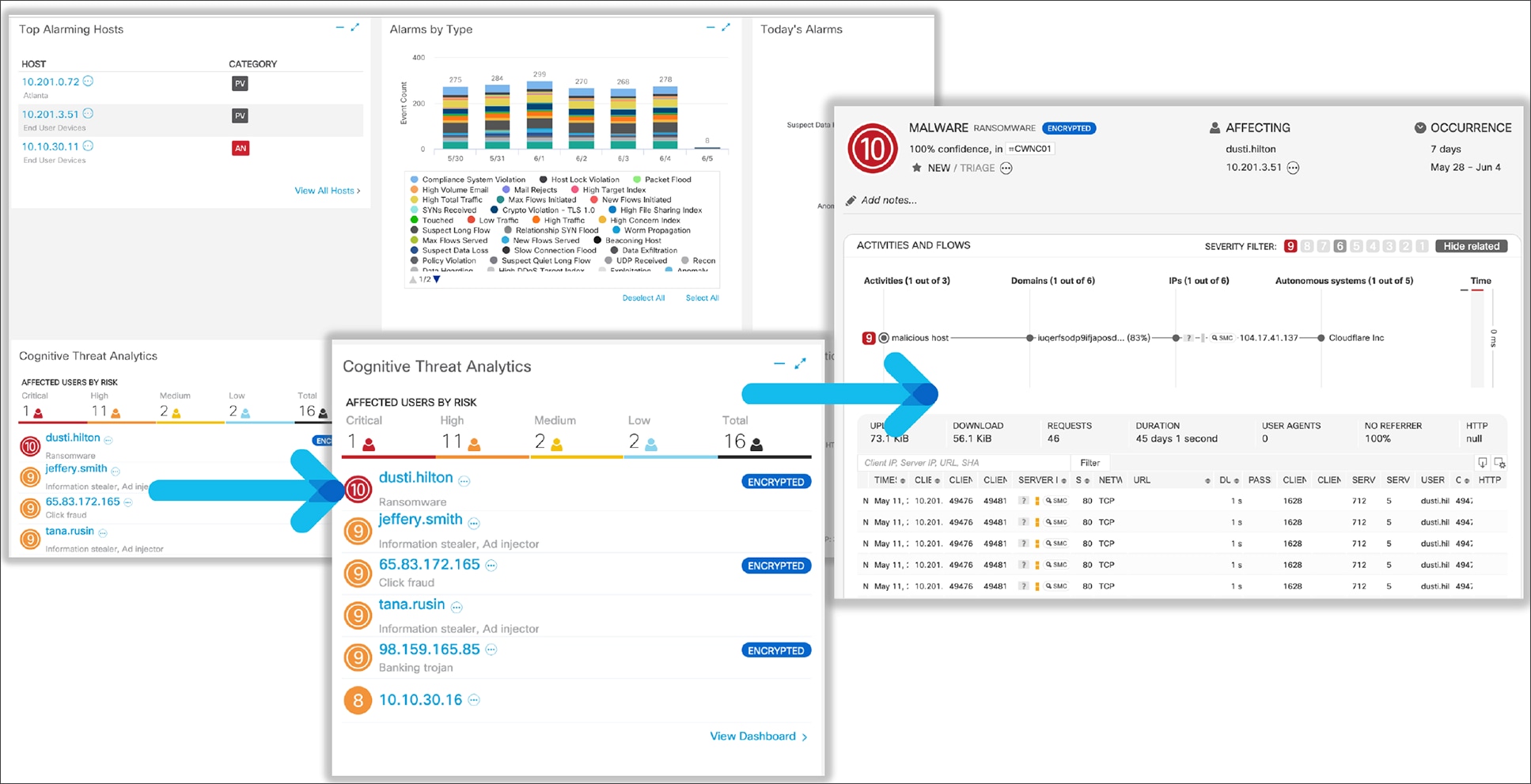 Encrypted Traffic Analytics also identifies encryption quality instantly from every network conversation, providing the visibility to ensure enterprise compliance with cryptographic protocols. For example, using SSL or early TLS violates PCI DSS (Payment Card Industry Data Security Standard) compliance. It delivers the knowledge of what is being encrypted and what is not being encrypted on your network so you can confidently claim that your digital business is protected. This cryptographic assessment is displayed in Secure Network Analytics and can be exported via APIs to third-party tools for monitoring and auditing of encryption compliance (Figure 5). You can read the full report here. Here are a few highlights:

Cisco Encrypted Traffic Analytics showed as much as 36 percent faster rates of detection, finding 100 percent of threats in three hours

Miercom tested a variety of malware, both encrypted and unencrypted, along two network paths. Both paths utilized Cisco networking equipment and Secure Network Analytics, but one path had Encrypted Traffic Analytics enabled and the other did not. The malware tested included exploits such as Trojans, botnets, ransomware, and keyloggers, and more than two-thirds of these threats used encrypted communications. Without Encrypted Traffic Analytics, this malicious activity would have persisted undetected.

Threat findings from the field

●      Potentially unwanted applications such as Tor and BitTorrent

In summary, the network is now an even more advanced security sensor, capable of detecting threats in encrypted traffic. An infrastructure readied with Cisco Digital Network Architecture turns the network into an end-to-end sensor and enforcer that detects, contains, and prevents emerging, sophisticated security threats.