The Cisco Nexus® 3550-F products are a compact yet powerful networking platform designed specifically for low-latency applications. The Nexus 3550-F products feature up to 48 ports of 10G Ethernet connectivity in a single-rack-unit form factor that can be configured as follows:

The Cisco Nexus 3550-F products are built with a unique modular architecture that scales with your network. Three-line card bays provide the flexibility to grow and change connectivity options over time, while two internal module bays allow the device to be upgraded with expanded functionality, adding new capabilities and extending the useful life of the product. The 3550-F architecture is shown in the figure below (Figure 1). At the heart of the architecture is a high-density Layer 1 matrix switch. This matrix switch provides low-latency programmable 10GbE connectivity between all modules. 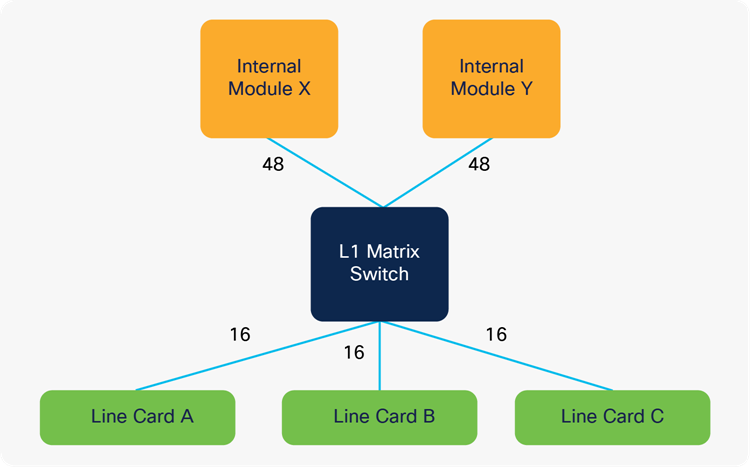 The internal modules bays are unpopulated for Layer 1 only use. A high-density FPGA (N35-F-KU115) module is included for Layer 2 Mux application. For custom applications, multiple FPGAs and/or multiple X86 CPU modules (N35-F-SKL) can be installed and programmed.

Ease of use and manageability

The Cisco Nexus 3550-F products use a custom operating system and Command Line Interface (CLI), designed specifically to address the needs of layer 1 switching and low latency FPGA configuration. Every command available on the CLI is also available via a remote JSON RPC API making this device easy to operate and manage at scale.

Unlike traditional network switches that operate only at the data-link layer (Layer 2), the Cisco Nexus 3550-F Modular Layer 1 Matrix Switch can operate at the physical network Layer 1 to provide the benefits of circuit switching to Ethernet devices. Connections through the switch are programmed into a matrix switch (see Figure 2) ahead of time and remain configured indefinitely. Unlike dynamic packet-based switching, this has the advantage of providing very low and deterministic latency. Packets can cross a Layer 1 matrix switch in under 5ns (from port to port).

The Cisco Nexus 3550-F Modular Layer 1 Matrix Switch has several useful purposes. It allows the device to tap into connections (for near transparent network monitoring), to patch connections between ports (for electronic network reconfiguration) and to fan-out connections from one port to many (for low latency data replication applications). 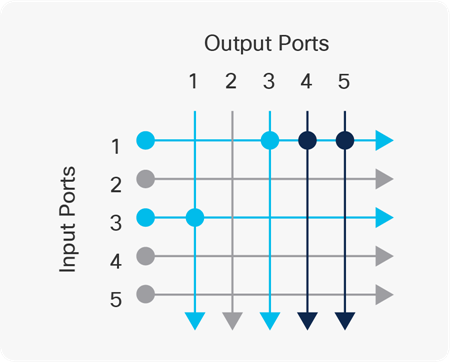 Figure 2, above, illustrates an example configuration of a Layer 1 matrix switch:

Network reconfiguration is a fact of life, yet colocation access is often expensive and sometimes impossible (for example, during business hours). The Cisco Nexus 3550-F Modular Layer 1 Matrix Switch offers a fast and convenient tool for managing and reconfiguring a physical network, remotely and at any time of the day, yet adds nearly no overhead. The remote JSON RPC API allows for such changes to be simply automated and controlled by a logically central controller.

Although the Cisco Nexus 3550-F Modular Layer 1 Matrix Switch operates at the physical layer, it is fully packet aware. Every port on the device is monitored for vital packet statistics including the number of packets/bytes transmitted/received and transmit/receive errors. The device also provides deep diagnostics including light levels, operating temperatures, transceiver capabilities, and more. All these statistics are available at no latency cost on the critical path.

Multiplexing may seem simple in principle, but there are many tradeoffs depending on the use case: What line speeds are required? How many ports are needed? How deep should buffers be for contention? What type of demultiplexing is supported? The Cisco Nexus 3550-F Programmable Multiplexer Switch supports multiple multiplexing modes, each with a different feature and latency tradeoffs, summarized in Table 1.

The FastMux mode, is the fastest multiplexer available. It offers 10G Ethernet connectivity and limited buffer depth. Demultiplexing is performed by layer 1 broadcast only. The FastMux is designed for applications where contention is low and pure speed is the only objective, such as electronic trading order entry networks.

The Mux mode offers 1G and 10G Ethernet options, with the ability to rate convert between these rates. It also offers Layer 2 and VLAN based demultiplexing. These features are designed for low latency long range wireless telecommunication networks where many customers require access to the same low-speed radio link.

●     Onboard BASH and Python scripts