• Multiplexed Voice/Data-As a dual port T1 or E1 Drop and Insert Multiplexer with integrated DSU/CSUs, reducing the complexity and number of network components and facilitating a graceful migration to bandwidth efficient packet voice.

• Specific models to support E1 G.703 unframed for utilizing the full 2.048 Mbps (Note: The G.703 models can also be configured for framed mode where they support all the features of the other VWIC models). Improves branch-office network manageability and reliability

• Simplifies remote network management by allowing a single management tool such as CiscoView or CiscoWorks to support router, CSU/DSU, drop and insert multiplexer

Customers who choose to integrate voice and data in stages preserve their investment in WAN interfaces. For example, the Multiflex VWIC can support data only applications as a WAN interface, then be re-used to integrate voice and data with the Drop and Insert multiplexer functionality and/or configured to support packetized voice (Voice over IP [VoIP] or Voice over Frame Relay [VoFR]) when in the NM-HDV, NM-HD-2VE, or NM-HDV2.

The Multiflex VWICs supply private branch exchange (PBX) and public switched telephone network (PSTN) connectivity for the NM-HDV, NM-HDV-2VE, or NM-HDV2 via digital T1/E1 ports. The NM-HDV, NM-HDV-2VE, and NM-HDV2 support industry standard H.323 based VoIP, industry standards FRF.11 and FRF.12 based VoFR, and AAL5 based VoATM.
Please note that for each of these packet voice applications (VoIP, VoFR, or VoATM), an appropriate WAN interface card is also required.

The Multiflex VWICs simplify branch office connectivity by integrating the functionality of a router, T1/E1, fractional T1/E1 serial interface with a fully managed DSU/CSU.
When used for "data-only" WAN connectivity, the Multiflex VWICs support numerous functions, including Cisco IOS ® command line interface initiated loopback control, similar to the popular WIC-1DSU-T1. Additionally the Multiflex VWIC is also offered in a dual port versions, including dual E1 configurations, enabling increased WAN port density in Cisco 26/28/36/37/3800 series multiservice access routers. The E1 VWIC versions include integrated DSUs, while the T1 VWIC versions integrate CSU and DSU functionality, simplifying remote network management.
The 2-port Multiflex VWICs increase configuration flexibility on Cisco multiservice access routers eliminating the need for 2 single-port T1/E1 WAN interface cards. Increasing the T1/E1 port density in a single WIC slot enables applications such as local serial aggregation with the WIC-2T or WIC-2A/S, or ISDN backup with the WIC-1B-S/T or WIC-1B-U.
The VWICs also support a channelized capability where the T1 or E1 service can be flexibly split into two or more fractional channel groups. Thus a single physical port can provide connection to multiple sites. (Note: when choosing this mode only a single port can be supported in each WIC slot.)
The VWIC-1MFT-G703 and VWIC-2MFT-G703 not only support unframed G.703 but also support all the features of the other VWICs including Drop and Insert on the VWIC-2MFT-G703. Additional flexibility is provided on the VWIC-2MFT-G703 with the capability to configure one port for unframed G.703 while configuring the other for standard framed E1.

These 2-port Multiflex VWICs simplify branch office connectivity by enabling a Cisco 2600, 2800, 3600, 3700 or 3800 to consolidate the functions of a router, a fully managed Drop and Insert Multiplexer, and a fully managed DSU/CSU into a single box. Typically a Drop and Insert multiplexer is used for channelized (i.e. Time Division Multiplexing [TDM]) integration of voice and data onto a single T1/fractional T1 or E1/fractional E1 connection to the CO. Sharing a line can significantly reduce costs over that of two separate physical lines to the CO. While the normal use is for voice and data sharing of a T1 or E1 service, the Drop and Insert capability can also be used for video and data, or data and data sharing of the service (e.g. two routers).
Moreover, the Enhanced Availability Drop and Insert (EADI) feature enhances system availability by allowing the Cisco IOS software to be reloaded while maintaining time division multiplexing (TDM) switching. 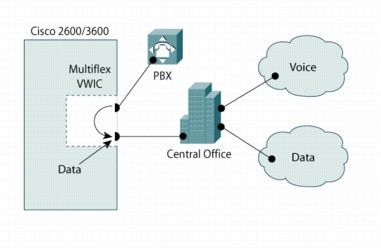 To illustrate, consider the example of a PBX with a T1 interface that needs to support a maximum of 10 simultaneous calls. With 24 DS0s in a T1 Service (1.544 Mbps) this leaves 14 DS0s or 896 Kbps of bandwidth for data from the router (14 x 64 Kbps). The number of DSOs assigned for PBX calls and the remainder that are available for use with router data are fully configurable (statically, not dynamically). In the case of an E1 service 30 DS0s are available for division between voice and router data.
In this example one port of the 2-port Drop and Insert Multiflex VWIC is connected to the PBX and the other port is connected to the CO. The 10 DS0s from the PBX are TDM switched to the "CO port" and this switching is done on the VWIC itself. The configuration of this TDM switching is flexible so that DS0s on the "PBX port" do not have to be mapped to DS0s with the same timeslots on the "CO port". The remaining 14 DS0s on the VWIC "CO port" terminate through the VWIC's backplane connector on the router as a single aggregate channel group. The 14 DS0s are not individually addressable by the router as a channelized service, but can be split into two or more channel groups. (See Table 2 for specifics.)
The 2-port Drop and Insert Multiflex VWIC is the model included in the 2-port versions of the Digital T1/E1 Packet Voice Trunk Network Module. The term "drop and insert" is normally used when router data (or data from another data device) is multiplexed with voice calls. A more generic term for "drop and insert" is "digital cross connect". Digital cross connecting of voice channels only is supported by the 2-port Drop and Insert Multiflex VWIC when in the NM_HDV, NM-HD-2VE, or NM-HDV2. For example, a single T1 connection from a PBX to the "PBX port" on the VWIC can be divided up between DS0s that go to the NM-HDV for packetized voice (e.g. VoIP), and DS0s that are TDM switched to the "CO port" of the VWIC for standard circuit switched voice connectivity.
In addition to support for Drop and Insert, the 2-port Drop and Insert VWICs have all the fuctionality of the 1- and 2-port Multiflex VWICs. Thus, for example, in a Cisco 2600 they can serve as 2-port T1/E1 interfaces with integrated DSU/CSU when drop and insert is not configured.

On the voice network modules, the basic voice connectivity is as follows:

See the data sheet of each network module (NM-HDV, NM-HD-2VE, and NM-HDV2) for further details. 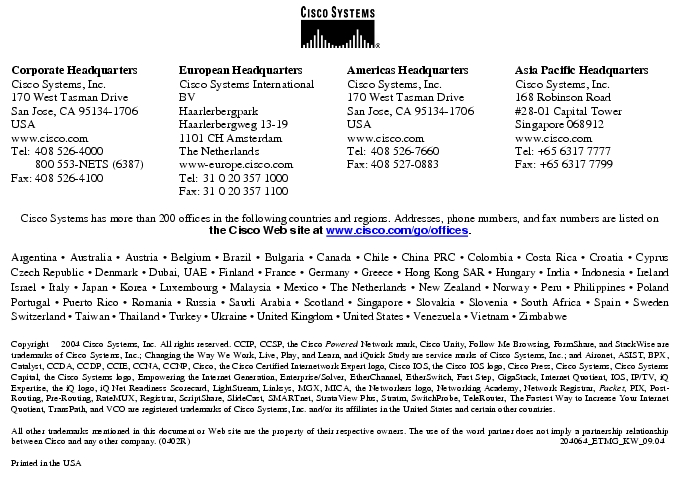