While initially conceived and built for use in latency-sensitive financial applications such as high-frequency trading, the Cisco Nexus K35-S FPGA SmartNIC has appeal that extends to any environment where latency is key. On an Intel® Ivy Bridge test system, median latency from application to network to application is 780 nanoseconds for small packets, which is significantly better than competing network cards on the same hardware. Half-roundtrip TCP latencies are as low as 930 nanoseconds for small payloads.

In addition to a standard Linux driver, a transparent TCP and UDP acceleration library is included, as well as a library for low-level access.

A transparent socket acceleration library allows applications to benefit from the low latency of a kernel bypass, in most cases without modifications to the applications. For the most latency-sensitive applications, a library called “libexanic” allows direct low-level access to the Cisco Nexus K35-S FPGA SmartNIC hardware and includes simple functions for sending and receiving Ethernet frames. With the optional firmware development kit, it is even possible to extend the Cisco Nexus K35-S FPGA SmartNIC firmware and add your own logic to the onboard FPGA.

These timestamps are available through a direct API and through Exact Capture, our free and open-source, high-rate capture system. Exact Capture can write tcpdump-compatible captures at line-rates to disk.

Additionally, the Cisco Nexus K35-S FPGA SmartNIC has Pulse-Per-Second (PPS) input and output and supports hardware-accelerated PTP. These can be used to synchronize the ExaNIC clock to external time references (such as a GPS receivers) allowing users to meaningfully compare captured timestamps across multiple servers and geographic locations. Finally, flow steering can be used to deliver packets to the right application’s receive buffer, while flow hashing can be used to distribute packets across multiple CPU cores for demanding capture applications.

The Cisco Nexus K35-S FPGA SmartNIC includes integrated support for bridging, which can further reduce latency by hundreds of nanoseconds.

Packets not destined for the local server can be bridged to the second port, transparently and with low latency. This port could be connected to a backup server or to a downstream switch. 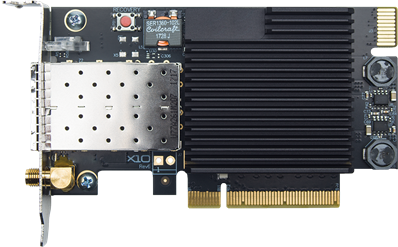