This chapter describes the Cisco Aironet 350 and CB20A Wireless LAN Client Adapters and illustrates their role in a wireless network.

This document covers the five client adapters described in Table 1-1.

Install Wizard version 1.3 or later and its software components are not supported for use with Cisco Aironet 340 series client adapters or Windows 98, 98 SE, NT, and Me.

client adapter—Refers to all five types of adapters.

The Cisco Aironet 350 series PC, LM, PCI, and mini PCI cards are IEEE 802.11b-compliant client adapters. They contain a direct-sequence spread spectrum (DSSS) radio that operates in the 2.4-GHz Industrial Scientific Medical (ISM) license-free band. The 100-mW radio transmits data over a half-duplex radio channel operating at up to 11 Mbps. These cards operate with other IEEE 802.11b-compliant client devices in ad hoc (or peer-to-peer) mode or with Cisco Aironet 340, 350, 1100, and 1200 Series Access Points (with a 2.4-GHz radio) and other IEEE 802.11b-compliant infrastructure devices in infrastructure mode. They are approved for indoor and outdoor use.

PCI cards are shipped with a 2-dBi dipole antenna that attaches to the card's antenna connector. However, other types of antennas may be used. PCI cards can be operated through only the primary (or right) antenna port.

Refer to the Antenna Mode (Transmit and Receive) parameters in Table 5-4 and Table 5-5 for information on setting the client adapter's antenna mode.

Mini PCI cards do not have LEDs.

The client adapter has three major software components: radio firmware, a driver, and client utilities. These components are installed together by running a single Install Wizard file that is available from Cisco.com. This file can be run on Windows 2000 or XP and can be used with any of the following client adapter types:

Install Wizard version 1.3 or later and its software components are not supported for use with Cisco Aironet 340 series client adapters or Windows 98, 98 SE, NT, and Me.

Chapter 3, provides instructions on using the Install Wizard to install or upgrade these software components.

Through the driver—The driver included in the Install Wizard file is also bundled with client adapter firmware. Each time you insert a client adapter or reboot your computer, the driver loads and may install the firmware with which it is bundled (if that firmware is newer than the firmware that is currently installed in the adapter). You can use the Install Wizard's Disable Firmware Checking parameter or ACU's Automatically Load New Firmware When NDIS Driver Is Updated parameter to specify whether the driver upgrades the firmware. Refer to page 6 and page 11 for more information.

Through ACU—The Load Firmware icon or Load New Firmware menu option in ACU enables you to upgrade the client adapter's firmware from an image (*.img) file that contains only firmware. Refer to the "Upgrading the Firmware" section for more information.

The driver provides an interface between a computer running a Windows operating system and the client adapter, thereby enabling Windows and the applications it runs to communicate with the adapter. The driver must be installed before the adapter can be used.

ACU enables you to create configuration profiles for your client adapter and perform user-level diagnostics. Because ACU performs a variety of functions, it is documented by function throughout this manual. However, an overview of the utility is provided below to familiarize you with its interface.

ACM, which is accessible from an icon in the Windows system tray, provides a small subset of the features available through ACU. Specifically, it enables you to access status information about your client adapter and perform basic tasks. Chapter 8, provides detailed information and instructions on using ACM.

If your computer is running Windows XP, you can configure your client adapter through the Windows operating system instead of through ACU. Refer to Appendix E, for information. However, ACU is recommended for configuring the client adapter. 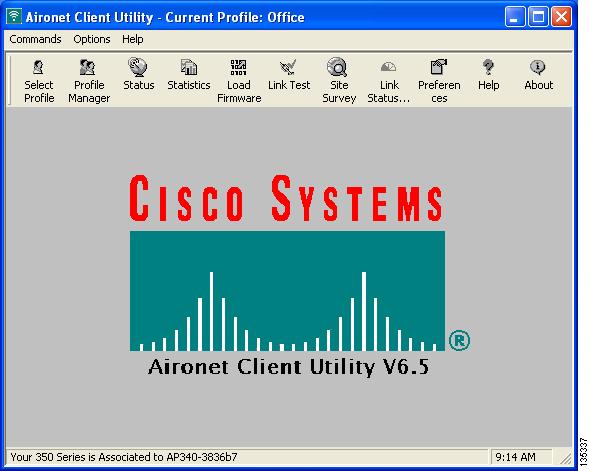 The title bar at the top of the Aironet Client Utility screen shows the profile that is being used by the client adapter.

The status bar at the bottom of the Aironet Client Utility screen reflects the current state of your client adapter. The following states are possible, where radio_name is the client adapter type and ap_name is the configured name of an access point:

Your radio_name is Not Associated!

Your radio_name is in AdHoc Mode

Your radio_name is being loaded with new firmware!

The radio in your radio_name is turned OFF!

Unable to read the status from your Wireless LAN Adapter!

Your radio_name has a problem!

Aironet Extensions must be enabled on access points running Cisco IOS Release 12.2(4)JA or later in order for the ap_name to appear in the status bar.

The information shown in the status bar is updated once per second.

The right side of the status bar shows the current time of day. If you set the clock to display seconds in the Aironet Client Utility Preferences screen, the time includes seconds in addition to hours and minutes.

To enable the clock to display seconds, open ACU, click the Preferences icon or choose Preferences from the Options drop-down menu, check the Display Seconds on Clock check box, and click OK.

Buttons on the ACU Screens

The buttons on the ACU screens are used to perform specific functions. Table 1-2 describes the most common buttons.

Refer to Chapter 5, for information on setting the client adapter's network mode. 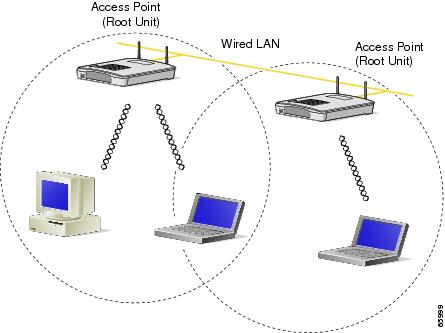