This section of the document introduces the ATF on Mesh APs and provides guidelines for its deployment. The purpose of this section is to:

Pre-requisite and Supported Features in 8.4 release

In this instance a public network is sharing a WLAN between two (or more) service providers and the venue. Subscribers to each service provider can be grouped and each group can be allocated a certain percentage of airtime.

In this instance, a university is sharing a WLAN between students, faculty, and guests. The guest network can be further partitioned by service provider. Each group can be assigned a certain percentage of airtime.

Enterprise or Hospitality or Retail

In this instance, the venue is sharing a WLAN between employees and guests. The guest network can be further partitioned by service provider. The guests could be sub-grouped by tier of service type with each subgroup being assigned a certain percentage of airtime, for example a paid group is entitled to more airtime than the free group.

In this instance, the business entity managing the hotspot, such as a service provider or an enterprise, can allocate and subsequently lease airtime to other business entities.

AirTime Fairness on Mesh Aps feature is very close conceptually to the ATF feature support release for Local Aps in theprevious releases. We are strongly recommend to review that feature and deployment steps in the guide at http:/​/​www.cisco.com/​c/​en/​us/​td/​docs/​wireless/​technology/​mesh/​8-2/​b_​Air_​Time_​Fairness_​Phase1_​and_​Phase2_​Deployment_​Guide.html

Before the solution overview of supporting ATF on mesh, lets quickly recap ATF - Airtime Fairness (ATF) is basically a concept which provides an ability to regulate/enforce the AP radio airtime in downstream direction for the clients associated through the SSID's. As a result, the Wi-Fi users on wireless network are fairly treated in terms of utilizing the radio WiFi radio airtime. This basically provides the key control either to enforce SLA additionally or simply to avoid certain group or individual from occupying an unfair amount of WiFi airtime on a particular or on a given AP radio. A service level agreement (SLA) is a contract between a service provider (either internal or external) and the end user that defines the level of service expected from the service provider. SLAs are output-based in that their purpose is specifically to define what the customer will receive.

In general, in the Mesh architecture, the Mesh Aps (Parents, child MAPs) in a Mesh Tree will be accessing the same channel (let's forget about extended sub-backhaul radios for a minute) on backhaul radio for mesh connectivity between Parents and child Maps. Whereas, the Root AP will be connected wired to the controller and MAPs will be connected wireless to the controller. Hence all the CAPWAP, Wi-Fi traffic will be bridged to the controller through the wireless backhaul radio and through RAP. In terms of the physical locations, normally the RAPs will be placed at roof top and the MAPs in multiple hops will be placed some distance apart within each other based on the Mesh network segmentation guidelines. Hence each MAP in a Mesh tree can provide 100% of their own radio airtime downstream to their users though each MAP accessing the same medium. To compare this in non-mesh scenario, where there can be neighboring local mode unified Aps in the arena next to each other in different rooms serving to their respective clients on the same channel with each providing 100% radio airtime downstream. Therefore, ATF has no control over enforcing clients in two different neighboring AP's accessing the same medium. Similarly, it's applicable for MAPs in a Mesh tree. For Outdoor/Indoor Mesh Aps, Airtime fairness must be supported on client access radios which serve regular clients as same as how we currently support ATF on non-mesh unified local mode Aps to serve the clients and additionally it must also be supported on backhaul radios which bridge the traffic to/from the clients on client access radios to RAPs (one hop) or through MAPs to RAPs (multiple hops). Its bit tricky to support ATF on backhaul radio's using the same SSID/Policy/Weight/Client fair sharing model. Since backhaul radio's doesn't have SSIDs and it always bridges traffic through their hidden backhaul nodes. Henceforth, on the backhaul radios either in RAP or MAP, the radio airtime downstream will be fair shared equally based on the number of backhaul nodes. This approach eliminates the problem and provides fairness to users across wireless mesh network in the case where the clients associated to 2nd hop MAP can stall the clients associated to 1st hop MAP where 2nd hop MAP is connected wireless to 1st hop MAP through backhaul radio though the Wi-Fi users in the MAPs are separated by a physical location. In the scenario, when a backhaul radio has an option to serve normal clients through universal client access feature, ATF considers the regular clients into single node and group them into it. It enforces the Airtime by equally fair sharing the radio airtime downstream based on the number of nodes (backhaul nodes + single node for regular clients). We will see more details how this solution is turned into design in the next sections. 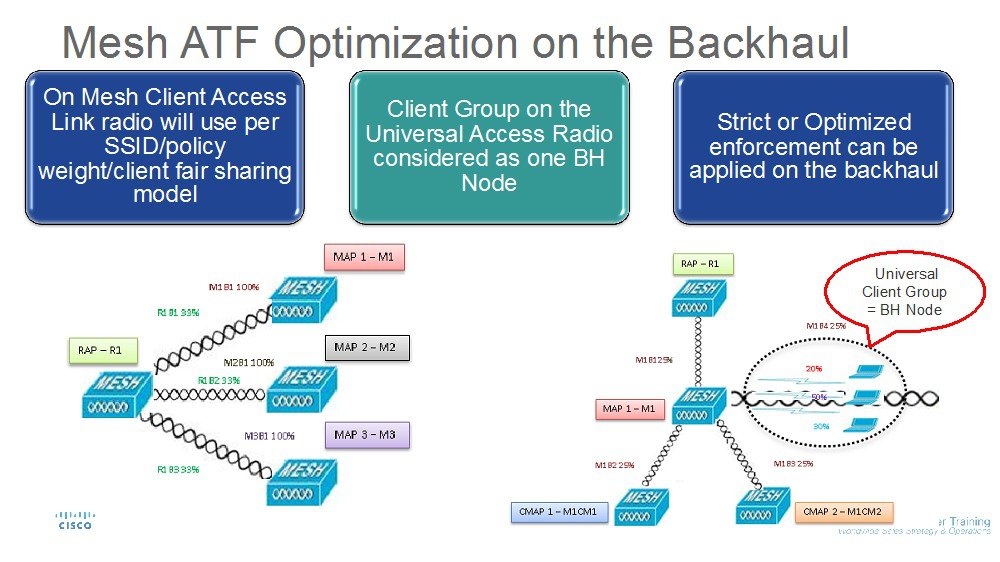 The Framework behind the ATF monitor mode is to allow the user to view and get the stats of overall Air Time being used i.e. to report the Air Time usage for all the AP transmissions. The ATF in monitor mode can be enabled on following levels.

To configure, ATF on mesh, perform the following steps: