A typical RAN is composed of thousands of base transceiver stations (BTSs)/Node Bs, hundreds of base station controllers/radio network controllers (BSCs/RNCs), and several mobile switching centers (MSCs). The BTS/Node Bs and BSC/RNC are often separated by large geographic distances, with the BTSs/Node Bs located in cell sites uniformly distributed throughout a region, and the BSCs, RNCs, and MSCs located at suitably chosen Central Offices (CO) or mobile telephone switching offices (MTSO).

The traffic generated by a BTS/Node B is transported to the corresponding BSC/RNC across a network, referred to as the backhaul network, which is often a hub-and-spoke topology with hundreds of BTS/Node Bs connected to a BSC/RNC by point-to-point time division multiplexing (TDM) trunks. These TDM trunks may be leased-line T1/E1s or their logical equivalents, such as microwave links or satellite channels.

The following sections describe the features available in the Cisco MWR 2941-DC router.

Cisco Pseudowire Emulation Edge-to-Edge (PWE3) is a mechanism that emulates the essential attributes of a service, such as EI/T1 (Figure 1-1).

The required functions of pseudowires (PWs) include encapsulating service-specific packet data units (PDUs) arriving at an ingress port and carrying them across a path or tunnel, managing their timing and order, and other operations required to emulate the behavior of the service efficiently.

PW is perceived as an unshared link or circuit of the chosen service. However, there may be deficiencies that impede some applications from being carried on a PW. These limitations should be fully described in the appropriate service-specific documents and applicability statements.

A PW is a connection between two provider edge (PE) devices, which connects two attachment circuits (ACs). An AC can be a VPI/VCI or an T1/E1 link.

SAToP encapsulates TDM bit-streams (T1, E1, T3, E3) as PWs over PSNs. It disregards any structure that may be imposed on streams, in particular the structure imposed by the standard TDM framing.

The protocol used for emulation of these services does not depend on the method in which attachment circuits are delivered to the PEs. For example, a T1 attachment circuit is treated the same way for all delivery methods, including: PE on copper, multiplex in a T3 circuit, mapped into a virtual tributary of a SONET/SDH circuit, or carried over a network using unstructured Circuit Emulation Service (CES). Termination of specific carrier layers used between the PE and circuit emulation (CE) is performed by an appropriate network service provider (NSP).

For instructions on how to configure SAToP, see Configuring Structure-Agnostic TDM over Packet (SAToP). For a sample SAToP configuration, see TDM over MPLS Configuration.

CESoPSN encapsulates structured (NxDS0) TDM signals as PWs over PSNs. It complements similar work for structure-agnostic emulation of TDM bit-streams, such as PWE3-SAToP.

Emulation of NxDS0 circuits saves PSN bandwidth and supports DS0-level grooming and distributed cross-connect applications. It also enhances resilience of CE devices due to the effects of loss of packets in the PSN.

For instructions on how to configure SAToP, see Configuring Circuit Emulation Service over Packet-Switched Network (CESoPSN). For a sample CESoPSN configuration, see TDM over MPLS Configuration.

An Asynchronous Transfer Mode (ATM) PW is used to carry ATM cells over an MPLS network. It is an evolutionary technology that allows you to migrate packet networks from legacy networks, yet provides transport for legacy applications. ATM over MPLS is particularly useful for transporting 3G voice traffic over MPLS networks.

You can configure ATM over MPLS in the following modes:

GSM Abis refers to the interface between the BTS and BSC in GSM system (the same term is used for CDMA systems). The Cisco MWR 2941-DC implementation of GSM Abis optimization over IP allows carriers to optimize voice and data traffic and maximize effective utilization of E1/T1 backhaul connections. Figure 1-2 shows a Cisco MWR 2941-DC router in a network using GSM Abis Optimization over IP. 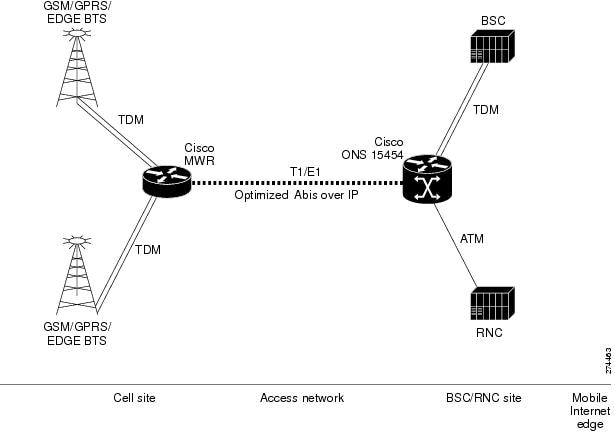 The Cisco GSM Abis optimization solution increases the T1/E1 bandwidth efficiency by as much as 50 percent:

Traffic loads can be carried using half as many T1/E1 trunks as previously used, allowing more voice and data calls to be carried over the existing RAN backhaul network.

The need to add new T1/E1 trunks is eliminated as traffic demands grow.

Excess capacity is available in the existing RAN backhaul network. The operator can reallocate recovered bandwidth to carry traffic from other radios, such as GPRS, EDGE, 1xEV-DO, PWLANs, and other data overlays. The operator avoids costs of supplementing backhaul capacity. It also accelerates time to revenue from deployments of new radio technologies, as there is no need for the operator to be delayed until additional microwave licenses or leased-lines are supplied.

Bidirectional Forwarding Detection (BFD) provides a low-overhead, short-duration method of detecting failures in the forwarding path between two adjacent routers, including the interfaces, data links, and forwarding planes. BFD is a detection protocol that you enable at the interface and routing protocol levels. For instructions on how to configure BFD, see the “Configuring BFD” section.

The Cisco RAN-O and IP-RAN solutions allow you to deliver profit-enhancing services. This is achieved through the set of IP networking features supported in Cisco IOS software that extends to the cell site (see Figure 1-3).

The cell site becomes a physical Point-of-Presence (POP) from which to offer hotspot services, or voice and wired ISP services, to nearby enterprises and residences. Because many cell sites are located in and around downtown areas, hotels, airports, and convention centers, they make attractive sites for co-locating public wireless LAN (PWLAN) access points and other wireless data overlays. Many of these wireless data radios are IP-based. IP networking features, like Mobile IP, VoIP, IP Multicast, VPN, and content caching, enable delivery of new revenue-generating services over these radios. The corresponding traffic “rides for free” on the spare backhaul bandwidth made available by Cisco Abis optimization solutions (Figure 1-3). 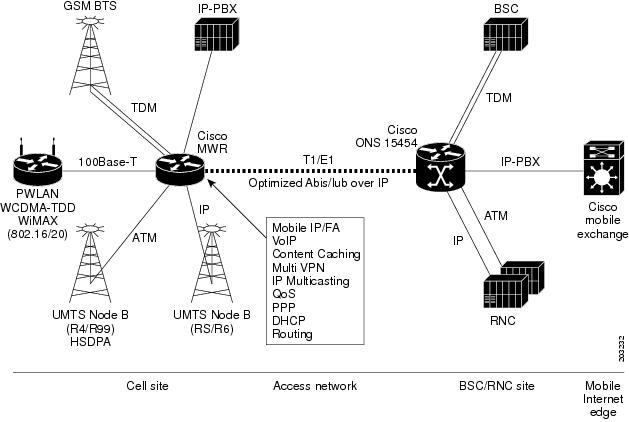 In RAN-Optimization (RAN-O), the Cisco MWR 2941-DC router extends IP connectivity to the cell site and base transceiver station (BTS). The router provides bandwidth-efficient IP transport of GSM and UMTS voice and data bearer traffic, as well as maintenance, control, and signaling traffic, over the leased-line backhaul network between the BTS and leased-line termination and aggregation node through compression (cRTP/cUDP) and packet multiplexing (Multilink PPP).

One version of the software is required for implementing the Cisco MWR 2941-DC router.

This section describes how to enable notifications provided by the CISCO-IP-RAN-BACKHAUL-MIB.

This MIB is compatible with Cisco Mobile Wireless Transport Manager (MWTM) Version 5.0 or later, and provides information on the optimization of the following traffic types:

To specify all notifications, specify the component name.

The following commands (configuration statements) are used to provide additional information about device and control generation of notifications:

You can use Cisco network management applications, such as Cisco Mobile Wireless Transport Manager (MWTM), to monitor and manage the Cisco MWR 2941-DC. This Network Management tool provides monitoring and management capabilities to the RAN-O solution. The Cisco MWTM addresses the element-management requirements of mobile operators and provides fault, configuration, and troubleshooting capability. For more information about MWTM, see http://www.cisco.com/en/US/products/ps6472/tsd_products_support_series_home.html.

The following limitations and restrictions apply to the Cisco MWR 2941-DC router.

The following hardware limitations and restrictions apply to the Cisco MWR 2941-DC router.

Caution The Cisco MWR 2941-DC does not support online insertion and removal (OIR) of HWIC cards. Attempts to perform OIR on a card in a powered-on router might cause damage to the card.

The following software limitations and restrictions apply to the Cisco MWR 2941-DC router.

The following features are supported in release 12.4(19)MR2 of the Cisco IOS software:

The following features are supported in release 12.4(19)MR2 of the Cisco IOS software:

Transportation of Service Using ATM over MPLS—Uses an Asynchronous Transfer Mode (ATM) PW to carry cells over an MPLS network; the feature is compliant with RFCs 4717 and 4816.

Adapative Clock Recovery (ACR)—Also known as Timing over Packet (TOP), this feature allows the MWR 2941 to use in-band or out-of-band clocking on a virtual or regular TDM pseudowire interface. ACR allows the Cisco MWR 2941-DC to recover clocking from the headers of a packet stream and is compliant with the G.823 and G.824 standards. You can use the recovered-clock slave command to configure out-of-band clock recovery and the recovered-clock recovered adaptive command to configure adaptive clock recovery.

Note The RTM module is not required to use Synchronous Ethernet.