Licensing for HA with CT5760

CT5760 is an extensible and high performing wireless controller, which can scale up to 1000 access points and 12000 clients. The controller has 6 - 10 Gbps data ports.

As a component of the Cisco Unified Wireless Network, the CT5760 series works in conjunction with Cisco Aironet access points, the Cisco Prime infrastructure, and the Cisco Mobility Services Engine to support business-critical wireless data, voice, and video applications.

IOS XE 3.3 SE release for Cisco 5700 Series Wireless Controller introduces 1:1 Active-Standby redundancy model for HA with the CT5760 controllers using the StackWise-480 technology. HA in Cisco 5700 Series Wireless Controller is enabled using Cisco StackWise-480 technology. StackWise-480 identifies active and standby members in the stack as per the Cisco IOS Software SSO technology. All the control plane activities are centralized and synchronized between the active and standby units. The Active Controller centrally manages all the control and management communication. The network control data traffic is transparently switched from the standby unit to the active unit for centralized processing. The 12 ports of the CT5760 HA redundant pair can be connected to the infrastructure network either through a single switch or two switches.

Bulk and Incremental configuration is synced between the two controllers at run-time and both controllers share the same IP address on the management interface. The CAPWAP state of the Access Points that are in Run State is also synched from the active WLC to the Hot-Standby WLC allowing the Access Points to be state-fully switched over when the Active WLC fails. The APs do not go to the Discovery state when Active WLC fails, and Standby WLC takes over as the Active WLC to serve the network.

There is no preempt functionality with SSO meaning that when the previous Active WLC resumes operation, it will not take back the role as an Active WLC but will negotiate its state with the current Active WLC and transition to the Hot-Standby state. The Active and Standby election process is an automated election process that occurs as part of the SSO StackWise technology and will be explained later in the document.

HA with AP SSO is supported in Cisco 5700 Series Wireless Controllers. IOS XE 3.3 release only supports AP SSO i.e. APs will not disconnect and continue to be associated to the controller after a switchover. However, all clients will be de-authenticated and forced to rejoin new the Active WLC because Client SSO is not supported with this release.

A CT5760 HA Pair is a special case of a switch stack that can have up to two CT5760 controllers connected through their StackWise-480 ports. The stack members work together as a unified system. A third CT5760 cannot join the switch stack or HA pair. A switch stack always has one active controller and one standby controller. If the active controller becomes unavailable, the standby assumes the role of the active, and continues to the keep the stack operational. The active controller controls the operation of the HA pair, and is the single point of stack-wide management. The term switch is loosely used in the document to refer to the CT5760 WLC for this reason.

StackWise-480 has a stack bandwidth of 480 Gbps and uses SSO to provide resiliency within the HA Pair. The Active CT5760 WLC creates and updates all the wireless information and constantly synchronizes that information with the standby controller. If the active WLC fails, the standby WLC assumes the role of the active WLC and continues to the keep the HA Pair operational. Access Points continue to remain connected during an active-to-standby switchover. 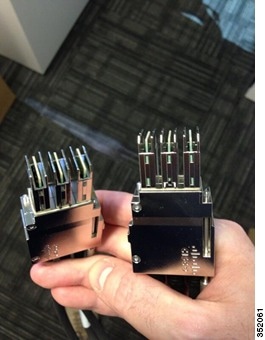 Each CT5760 WLC has two Stack Ports and it is recommended to connect the Stack Cables in a full-ring setup as shown below for stack cable redundancy. 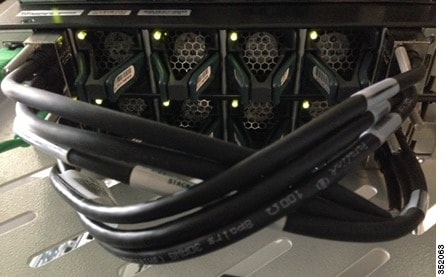 The StackWise-480 cable needs to be plugged into the Stack Port as shown below with the Cisco Logo facing upward. 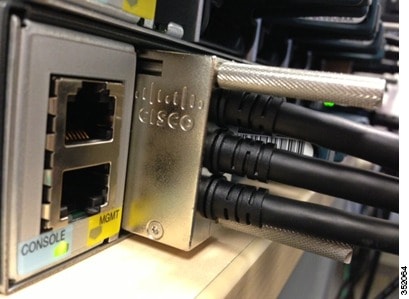 Customers who buy AIR-CT5760-HA with 3.3 will also be given an option to buy stack cables.

The command show switch stack-ports summary can be used to verify the connectivity of the Stack Cables.

The table provides details on what the various fields refer to.

The command show switch displays summary information about the HA Pair, including the MAC address, role, switch priority, and current state of each CT5760 WLC in the redundant HA pair.

However, the Persistent MAC Address feature can be used to set a time delay before the MAC address changes.

The active controller can be accessed through a console connection, Telnet, an SSH, or a Web Browser by using the Management IP address. To access the IOS console of the standby WLC, use the session standby ios privileged EXEC command from the active CT5760 after executing the following commands from the config mode.

The prompt on the Standby console is appended with “-stby” to reflect the Standby WLC console as shown below.

The standby access commands do not survive a reboot and need to be configured every time the WLC reboots. The commands also do not show in "show run all”. 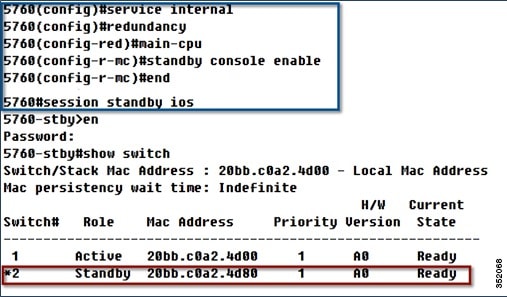 The show switch command points to the current CT5760 WLC on the console using the (*) symbol against the switch number as shown above.

An active CT5760 WLC retains its role as an Active Controller unless one of the following events occur:

The active WLC CT5760 is elected or re-elected based on one of these factors and in the order listed below:

The CT5760 WLC with the highest stack member priority value.

The CT5760 with the shortest start-up time.

The CT5760 with the lowest MAC Address.

The ACTV LED on the switch can be used to identify the current Active Controller.

The LAG, or an EtherChannel, bundles all the existing ports in both the standby and active units into a single logical port to provide an aggregate bandwidth of 60 Gbps. The creation of an EtherChannel enables protection against port failures and provides port level redundancy. The EtherChannels or LAGs created are used for link redundancy to ensure HA of Access Points. Multiple LAGs can be configured on the CT5760 WLC.

Connect two CT5760 WLCs that are in powered down state using the Stack Cable.

Power up and perform a boot on both controllers simultaneously or power and boot one controller.

The controllers boot up successfully and form a HA pair.

Configure EtherChannel or LAG on the units.

Use the show etherchannel summary command to view the status of the configured EtherChannel.

On successful configuration, all the specified ports will be bundled in a single channel and listed in the command output of show etherchannel summary .

Sample output of show etherchannel summary when LACP is configured is shown:

U - in use f - failed to allocate aggregator

M - not in use, minimum links not met

u - unsuitable for bundling

w - waiting to be aggregated

Number of channel-groups in use: 1

The show running-config command output shows the interfaces associated with the provisioned WLC. 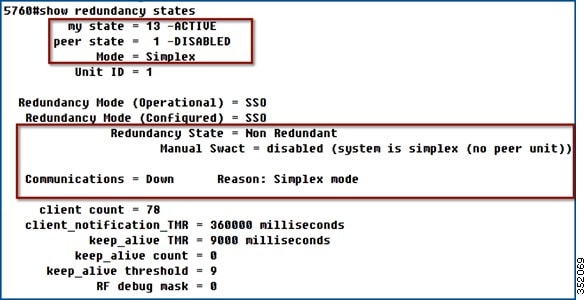 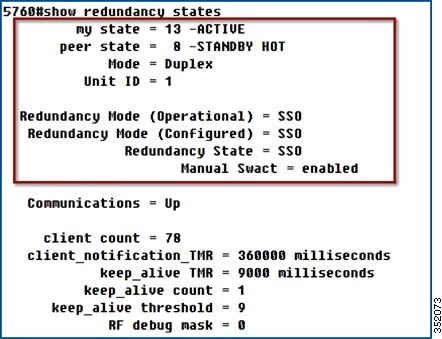 An Access Point Stateful Switch Over (AP SSO) implies that all the Access Point sessions are switched over state-fully and Access Points continue to operate in a network with no loss of sessions, providing improved network availability and reducing service downtime. The Active Controller in the redundant pair is equipped to support 1000 Access Points and 12000 clients.

Once a redundancy pair is formed while in a stack, HA is enabled, which means that Access Points continue to remain connected during an active-to-standby switchover.

Manual Switchover Action (Manual Swact) i.e. the command redundancy force-switchover cannot be executed on the Standby WLC and is enabled only on the Active Controller. 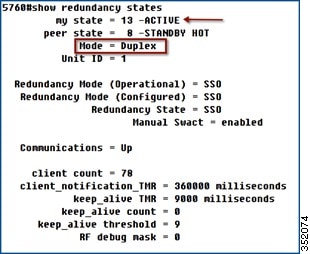 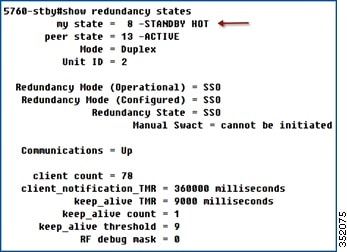 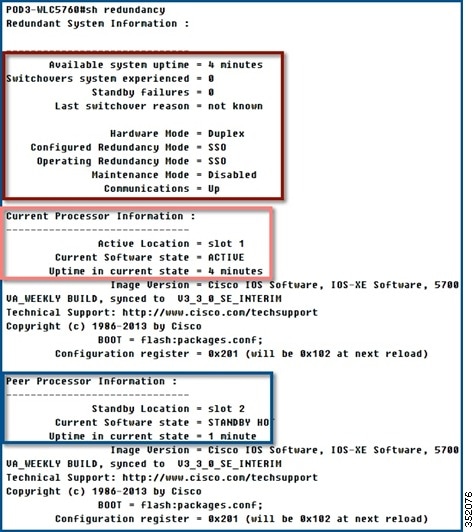 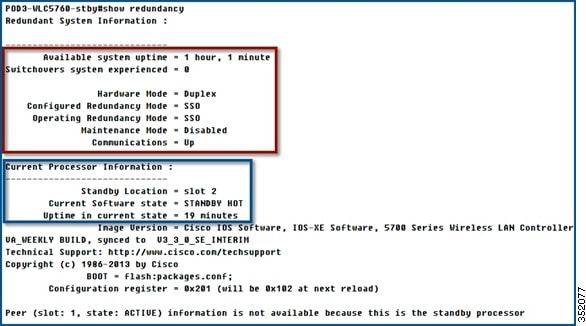 AP CAPWAP state information is synced to the standby controller. AP uptime and association time can be verified using the command show ap summary and show ap uptime on the Active and Standby Controllers. 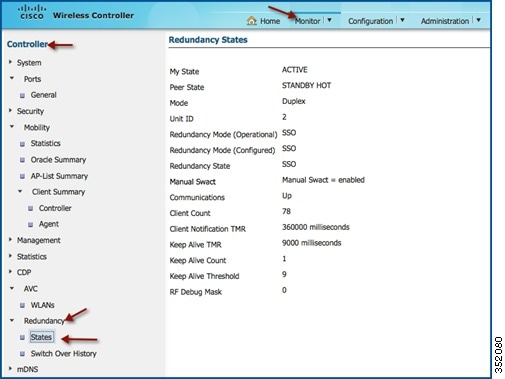 The description of the parameters in the output is given below:

Navigate to Monitor > Controller > Redundancy > Switch Over History on the controller Web UI.

The Redundancy Switch Over History page is displayed:

The description for the following parameters are displayed in the table below:

The 12 ports of CT5760 WLC can be connected to the infrastructure network either through a single switch or through two switches. In either case, the ports of CT5760 WLC are configured into LAG bundles. Failing of ports connected to neighbor switches does not induce a system switchover and it only affects bandwidth when less than 6 ports are active. However, system switchover can occur due to various reasons identified below.

This type of switch over occurs when any of the key processes running on the Active unit fails or crashes. Examples of this are HA Manager, WCM, Stack Manager, FED, FFM, and so on. Upon such a failure, the Active unit reloads and the hot Standby takes over and becomes the new Active unit. When the failed system boots up, it will transition to Hot-Standby state. If the Standby unit is not yet in Hot Standby State, both units are reloaded and there will be no AP SSO. A process failure on the standby (hot or not) will cause it to reload.

This switchover from the Active to Standby unit is caused due to power failure of the current Active unit. The current Standby unit becomes the new Active unit and when the failed system boots up, it will transition to Hot-Standby state.

The HA feature is enabled by default when CT5760 WLCs are connected using the stack cable and the Cisco StackWise-480 technology is enabled. You cannot disable it; however, you can initiate a manual graceful switchover using the command line interface. This is a user initiated forced switchover between the Active and Standby unit. The current Standby unit becomes the new Active unit and when the failed system boots up, it will transition to Hot-Standby state. To perform a manual switchover, execute the redundancy force-switchover command. This command initiates a graceful switchover from the active to the standby controller. The active controller reloads and the standby takes over as the New Active controller. 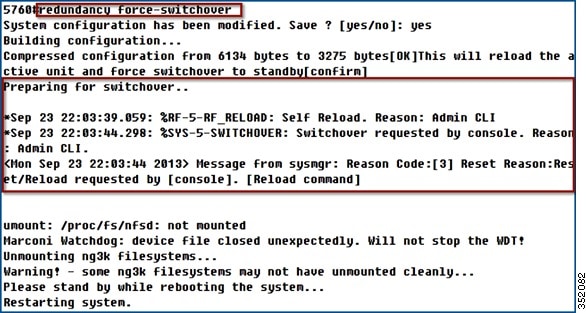 The table below gives an estimate of the time metrics involved in the failover process:

*with 12K clients prior to switchover

Clients must be de-authenticated upon a switchover. This can be verified by executing the commands:

Prior to IOS XE Release 3.3, AP SSO was not supported on CT5760 WLCs. Upgrade individual controllers to image version 3.3 before pairing them for HA using the guidelines explained in the Best Practices for HA Pairing Process section.

Upgrade of an HA Pair to image versions after IOS XE Release 3.3 can be achieved by following the steps listed below:

Run the software install file flash:<image.bin> command pointing to the new image on the flash to upgrade the HA Pair without having to upgrade controllers individually.

A hybrid topology of AP SSO redundant pair and N+1 primary, secondary and tertiary model is supported as shown above. The secondary controller at the DR site can be a CT5760 or a CUWN controller running New Mobility. Access points failing back from converged access CT5760 WLC to CUWN controllers will re-download the code before joining the CUWN WLC.

Licensing for HA with CT5760

In a HA redundant pair, the AP count is combined from license counts on both controllers. The Active controller will display all AP licenses broken down per controller. The total number of APs that can be supported by the CT5760 WLC HA pair is 1000.

The following table shows the examples of pairing controllers and their effects on the licenses for the APs.