Idle-mode Signaling Reduction (ISR) feature allows the UE to move between LTE and 2G/3G without performing Tracking Area (TA) or Routing Area (RA) updates once it has been activated. A pre-requisite for ISR activation is that the UE, SGSN, MME, Serving GW and HSS all support ISR. At the first attach to the network, ISR is not activated. ISR can only be activated when the UE has first been registered in an RA on 2G/3G and then registers in a TA or vice versa.

Circuit-Switched Fallback (CSFB) is an alternative solution to using IMS and SRVCC to provide voice services to users of LTE. The IMS is not part of the solution, and voice calls are never served over LTE. Instead, the CSFB relies on a temporary inter-system that switches between LTE and a system where circuit-switched voice calls can be served.

The LTE terminals 'register' in the circuit switched domain when powered and attaching to LTE. This is handled through an interaction between the MME and the MSC-Server in the circuit-switched network domain over the SGs interface.

To support CS fallback, existing procedures are modified and some additional CS fallback specific procedures added to the EPS. Additions are done to the "Attach" and "TA update" procedures which activate an interface called the SGs. This interface is between the MME and MSC. It is used by the MSC to send paging messages for CS calls to the UE on the LTE system.

Example of a CS fallback call 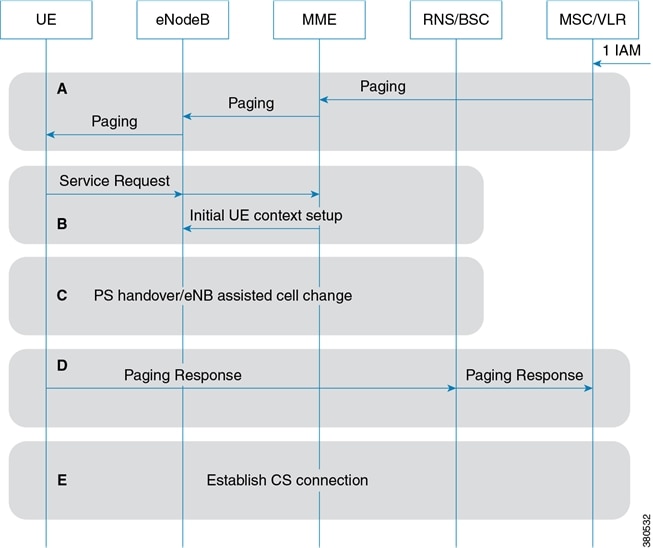 The CS fallback is primarily supports voice calls but it also supports other CS services. In the case of SMS services the UE need not switch to other radio interfaces. The UE can remain on LTE and still send and receive SMSes. The SMS messages are tunnelled between the UE and the MSC through the MME NAS signalling and the SGs interface.

When ISR is activated the UE is simultaneously registered at both SGSN and MME. So any paging for CS services occurs at both the SGSN and the MME. In a network if ISR is activated for an UE and CSFB is used in the network, the SGSN has to support additional call flows.

Relationships to Other Features

Relationships to Other Products

To enable ISR for subscriber peer nodes, the MME and SGW must support ISR functionality.

Listed below are the scenarios where ISR with CSFB is impacted by the SGSN, these scenarios are applicable to both 2G and 3G when ISR is enabled:

The call flow below depicts a CS Paging example:

The call flow below depicts an Alert and UE Notification scenario: 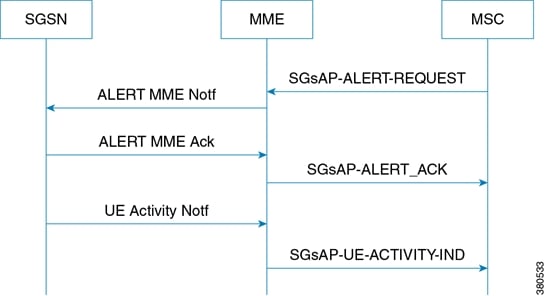 When the UE wants to perform a combined RAU/LAU, the SGSN verifies the "combined EPS/IMSI attach capability" bit in MS Network Capability and if it indicates that CSFB and/or SMS over SGs is enabled, then the SGSN de-activates ISR. The SGSN does not indicate that ISR is activated in the RAU Accept message.

If the MME clears a subscriber then SGs association with the MSC is closed and leads to a drop of voice calls from the MSC. To avoid this issue a few changes are done in SGSN to establish the Gs association between the MSC and the SGSN on ISR de-activation.

If "Detach Notification" is received from the MME with Detach Type set as "Local Detach" and if the UE supports EMM Combined procedures then, the SGSN sends an IMSI Detach request to the UE and sets the "EMM Combined UE Waiting" flag.

If the SGSN then receives a Periodic RAU Request and the flag "EMM Combined UE Waiting" is set, an IMSI Detach is sent to the UE in order to ensure that next time the UE performs a Combined RAU. This enables Gs association between the SGSN and the MSC/VLR and the MT voice calls are not lost.

If the SGSN receives a Combined RAU Request when the flag "EMM Combined UE Waiting" is set, then this flag is cleared and Gs association is activated.

The MS initiated last PDN de-activation procedure is listed below:

The Idle mode signaling reduction complies with the following standards:

The following commands are used to configure 3G paging cause for CSFB:

Monitoring and trouble-shooting the CSFB feature

The configuration can be verified by executing the show command show iups-service, the following parameter is displayed on executing the command:

The show command show subscriber sgsn-only full all has been updated to include a display for "SSAF" and "Emm_combined_ue_waiting" flags. The new parameters are displayed as below: