This segment describes the Quality of Service (QoS) management on Cisco® ASR 5500 chassis and explains how it is configured.

The product Administration Guides provide examples and procedures for configuration of basic services on the system. You should select the configuration example that best meets your service model and configure the required elements for that model as described in the respective product Administration Guide, before using the procedures described below.

The QoS Traffic Policing functionality supported by the GGSN implements QoS for subscribers based on the configuration of the APN template. As a result, all subscriber PDP contexts using the APN receive the same QoS level. This could lead to unused or under-utilized bandwidth by some subscribers thus reducing the amount of resources available to others.

Dynamic QoS Renegotiation minimizes the risk of bandwidth mis-appropriation. This feature allows the GGSN to analyze application traffic, and trigger QoS renegotiation with the SGSN to optimize service performance.

In Dynamic QoS Renegotiation, the GGSN performs packet inspection of application traffic to detect the type of service being utilized and automatically renegotiates the QoS to the appropriate level with a maximum QoS level corresponding to the level granted by the HLR.

QoS renegotiation is performed by sending an Update PDP Context Request to the SGSN. This solution is optimal since the appropriate QoS level is always granted to the subscriber without any requirement on the handset or on the core network. The only prerequisite is QoS renegotiation support on the SGSN. In this model, over reservation of radio resources is avoided, while maintaining the appropriate bandwidth for subscribers with real requirements.

The ASR 5500 supports L7 stateful analysis and QoS Renegotiation. These functions combine to become Dynamic QoS Renegotiation. The system also generates CDRs (or real time charging information) that includes the current QoS information and the service accessed. This enables intelligent application-based charging of services, taking into account the granted QoS. It also enables rebates when it was not possible to provide the QoS level required by an application.

For L7 traffic analysis an ECSv2 license is required.

When the session is established, an initial level of QoS must be assigned to the subscriber. The GGSN may either grant the requested QoS, or grant a lower QoS level (minimum or intermediate level). The initial QoS remains in effect until the SGSN or GGSN requests a change. When Dynamic QoS Renegotiation is enabled, there are several conditions when the system would request a QoS change.

QoS renegotiation requires knowing what kind of data packets are flowing through for a particular user to associate a given traffic class with the user's current usage pattern. This is done through packet inspection for a subscriber profile via an Access Control List (ACL). Limits for each traffic class can be configured in the APN. The same infrastructure is reused to perform Dynamic QoS Renegotiation.

After classification of traffic and if required by subscriber profile, Dynamic QoS Renegotiation takes place.

L4 packet analysis has no or low impact on the system performance with very limited impact on system capacity. L4 packet inspection is fully supported by the system.

The following is the overall Dynamic QoS Renegotiation process.

As seen in the following figure, the QoS profile for the subscriber goes through three renegotiations to match the QoS profile of the highest priority application currently being used. 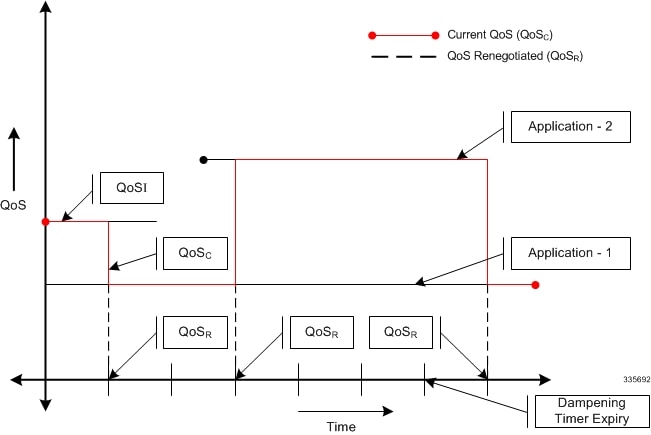 When there is no traffic, traffic class drops to "Background" and the corresponding QoS profile is negotiated as described above.

Network-controlled QoS is the method by which the system updates the QoS for a PDP context (primary or secondary) upon receipt of Network Requested Update PDP Context (NRUPC) messages from the GGSN. The system can also activate a new secondary PDP context upon receipt of a Network Requested Secondary PDP Context Activation (NRSPCA) message from the GGSN.

The GGSN activates or modifies a bearer whenever a service flow matches a statically provisioned Policy and Charging Control (PCC) rule. The network, based on QoS requirements of the application/service, determines what bearers are needed and either modifies an existing bearer or activates a new one.

The packet that triggered the NRUPC request is discarded.

If no context satisfying the MBR limit is found, or if there is no context with the same QCI as the NRO rule, the system triggers NRSPCA. If the request succeeds, the rule is bound to that context.

The packet that triggered the NRSPCA request is discarded.

TFTs from the charging-action associated with the NRO rule are also sent as part of the NRUPC/NRSPCA request, and returned as part of the Create PDP Context Response.

Finally, if a non-NRO rule matches, ACS proceeds with the normal processing of that packet. Non-NRO charging-actions can still do "flow action" or ITC (limit-for-flow-type and limit-for-bandwidth).

ACS also does the following:

This section describes how to configure per-APN based Dynamic QoS Renegotiation.

Configuring an ACL and applying it to an APN template are required to specify permission and treatment levels for Dynamic QoS Renegotiation.

Use the following example to configure an ACL for Dynamic QoS Renegotiation:

Use the following example to configure rulebase parameters for Dynamic QoS Renegotiation support:

Use the following example to configure an APN template's QoS profile in support of Dynamic QoS Renegotiation:

Use the following example to configure packet filter parameters for NCQoS support:

Use the following example to configure charging action parameters for NCQoS support:

Use the following example to enable Bearer Control Mode (BCM) for NCQoS support:

Use the following steps to verify/monitor Dynamic QoS Renegotiation operations:

The Session Manager facility sources event IDs that can be useful for diagnosing errors that could occur when implementing of Dynamic QoS Renegotiation feature.

The following table displays information pertaining to these events.

The RADIUS attributes listed in the following table are used to enable Dynamic QoS Renegotiation for subscribers configured on remote RADIUS servers.