This chapter describes the system's support for Network Mobility V4 (NEMOv4) with Multi-VRFs and explains how it is configured. The product Administration Guides provide examples and procedures for configuration of basic services on the system. It is recommended that you select the configuration example that best meets your service model and configure the required elements for that model, as described in the respective product Administration Guide, before using the procedures in this chapter.

The existing design of HA NEMOv4 has been extended to support multiple enterprise network being connected from one Mobile Router. A Mobile Router (MR) can be configured with devices/subnets to seamlessly access multiple enterprize VRFs, and the network traffic targeted for those different VRFs will share same MIP tunnel without compromising the privacy and security. Each VRF works independently through the MR and HA services.

This is done by separating the VRFs at the NEMO registration time, each VRF will be furnished with own set of GRE keys for the bidirectional traffic between MR and HA.

The following figure shows a high-level view of Multi-VRF Support.

The following use cases are supported by NEMO Multi-VRF. Multi-VRF provides a simplified CPE/UE configuration, strong privacy and separation between networks, without impacting an organization's IP addressing or routing designs or protocols. :

The system supports the usage of dynamically learned, overlapping customer prefixes. These prefixes are advertised via BGP.

The following figure shows a high-level view of the NEMO control plane.

Overlapping MNPs are allowed, if they are associated with different VRF. MNP must be different if same VRF name is used on either one MR or across all MRs. Though per customer request, HA does not explicitly deny a request with such misconfiguration.

NEMO4G-HA processes the maximum of 16 Cisco-specific MIPv4 Extensions of type Normal Vendor/Org Specific Extension (NVSE) that are included in the MIPv4 NEMO RRQ. The Cisco NVSE carries VRF tags as part of the registration signaling. A GRE key associated with the VRF shall be embedded to this new NVSE, in order to provide VRF traffic segregation between the MR ISR and the NEMO-HA ASR5K during data forwarding. Note, there may be multiple MNPs for one GRE key, but not one MNP with multiple GREs. The Mobile Network Prefixes (MNP) will need to be associated with these VRF tags.

User traffic shall be encapsulated over a GRE tunnel between the MR NEMO client and NEMO4G-HA. The IP endpoints of the GRE tunnel shall be the IPv4 assigned to the MR modem during the Enterprise PDN connection setup and the IPv4 address of the NEMO4G-HA service on the HA/PGW/GGSN.

The following session interaction scenarios are supported between NEMO and the underlying PDN connection made over CDMA MIP or eHRPD or LTE access.

The mobile router on receiving a packet to from the tunnel shall use the GRE key to identify the tunnel instance. After decap, the packet shall be forwarded towards the mobile networks, based on the route lookup in the specific VRF context.

On receiving a packet from the mobile network, the default-route in the specific VRF context (associated with that input interface) shall be used and the packet encap shall get the correct GRE key.

In the following circumstances, NEMO4G-HA shall withdraw the associated prefix routes from the Enterprise VRF routing table, update the eBGP neighbors and free up all internal resources allocated for the underlying PDN connection and NEMO session:

NEMO4G-HA shall silently ignore NEMO MIPv4 RRQs if the underlying PDN connection associated to each of those RRQs does not have the NEMO permission indication. This applies to CDMA, eHRPD and LTE access.

NEMO4G-HA shall forward (not drop) user data using MIP or GRE tunneling (UDP/434 or IP Protocol/47, respectively) to the external enterprise VRF if such data is not destined to the NEMO4G-HA IP address. This applies to PDN connections that have or do not have the NEMO Permission indication. This shall also apply to both eHRPD and LTE access.

Any failure on either the authentication or authorize of a NEMO MIPv4 session shall not affect the underlying PDN connection established between the mobile router and the HA/PGW/GGSN via eHRPD or LTE. For example, if the security credentials do not match between the MR NEMO client and NEMO4G-HA, NEMO4G-HA can reject the NEMO MIPv4 RRQ, but the associated PDN connection shall not be terminated.

NEMO4G-HA uses the registration lifetime value locally configured, even though MR's may use the maximum possible value (65534).

NEMO4G-HA supports a control mechanism to limit the maximum number of prefixes/routes that a given enterprise can register, including the pools for WAN IP assignments.

When the maximum number of routes is reached, a syslog message is generated. Once the number of routes goes under the limit, a syslog message is generated for notification. And no further routes are accepted into the VRF route table. NEMO MIP RRQ is rejected accept for Multi-VRF NEMO in which case the NEMO MIP RRQ is accepted but offending VRF denied.

HA/PGW/GGSN forces IP packet fragmentation even for IP packets with the DF-bit set from enterprise to mobile. From mobile to enterprise DF-bit is honored.

The following figure describes the call flow of the NEMOv4 solution. 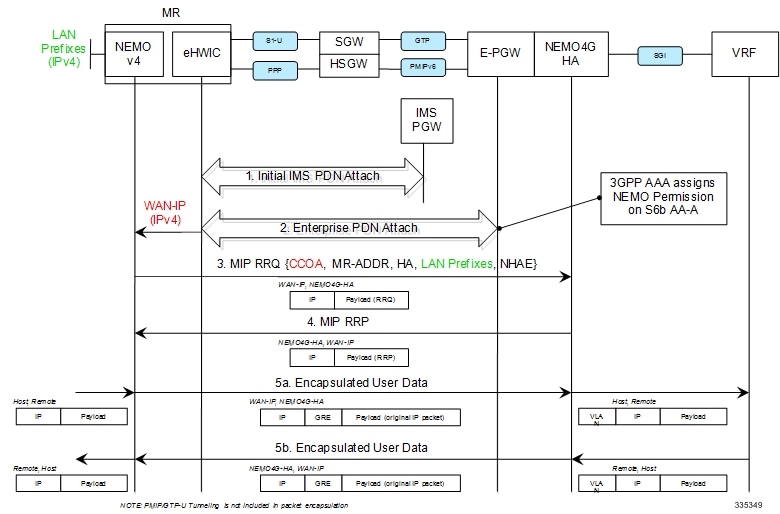 HA tries to accommodate the variety of RRQ without issuing failures. However, if failure occurs, different level of logging message are logged And the E-XGW will return RRP with error code 0 but not include the failed VRFs or MNPs.

ASR5K provides some CLI commands with this new feature.