When the User Equipment (UE) is unreachable due to 'Power Saving Mode' or 'Extended Idle Mode DRX', there might be high latency for initial response before the exchange of packets, which is the time taken by the UE to establish a connection and initiate data transfer. Owing to high latency, there is a need to buffer data for a longer duration.

High Latency Communication (HLCOM) feature introduces buffering of MT data at the S-GW (part of SAEGW), when the UE is in a power saving state and not reachable.

The HLCOM buffering time duration or the packet count is based on the first successful DDN Ack carrying those parameters. No new DDNs are initiated once the call is received and HLCOM parameters start buffering the packets. Other features such as "Priority Paging" do not override the HLCOM UE. Packets buffered are not recovered and neither the state of the HLCOM. Buffered packets are lost on recovery. HLCOM duration and packet count to be buffered is not recovered. Hence, any packet post recovery triggers DDN.

HLCOM buffers, configurations, and timers are independent of existing IDLE mode of buffering. This means that the buffer allocated for HLCOM is more than the IDLE mode memory for buffering data.

The 2-4 KB buffering legacy paging limit is not applicable for HLCOM. In case of HLCOM devices, upto 4KB data can be buffered per UE in the dedicated 96MB memory. Those devices for which 4k memory is utilized and more is needed, memory can be extended upto 10k, provided memory available in the extended memory of size 10MB.

The DDN Ack carries packet count or duration. The buffered data is delivered to the UE on establishing user plane for data delivery, when the UE contacts the MME or SGSN by signaling. This signaling happens in the Tracking Area Update and the Routing Area Update procedures, which triggers MBR towards the S-GW. Extended buffering of the downlink data in the S-GW is controlled by the MME/S4-SGSN or in the Gn/Gp-SGSN. The Gn/Gp-SGSN similarly buffers downlink data until the UE is expected to come back from its power saving state. If there is S-GW change or a Gn/Gp-SGSN change, the buffered packets are forwarded and are not lost. The number of packets to buffer is decided by the S-GW or Gn/Gp-SGSN, but the MME/S4-SGSN may optionally provide a suggestion for the number of downlink packet to be buffered.

Following are the various Call Flow Scenarios to explain how HLCOM works: 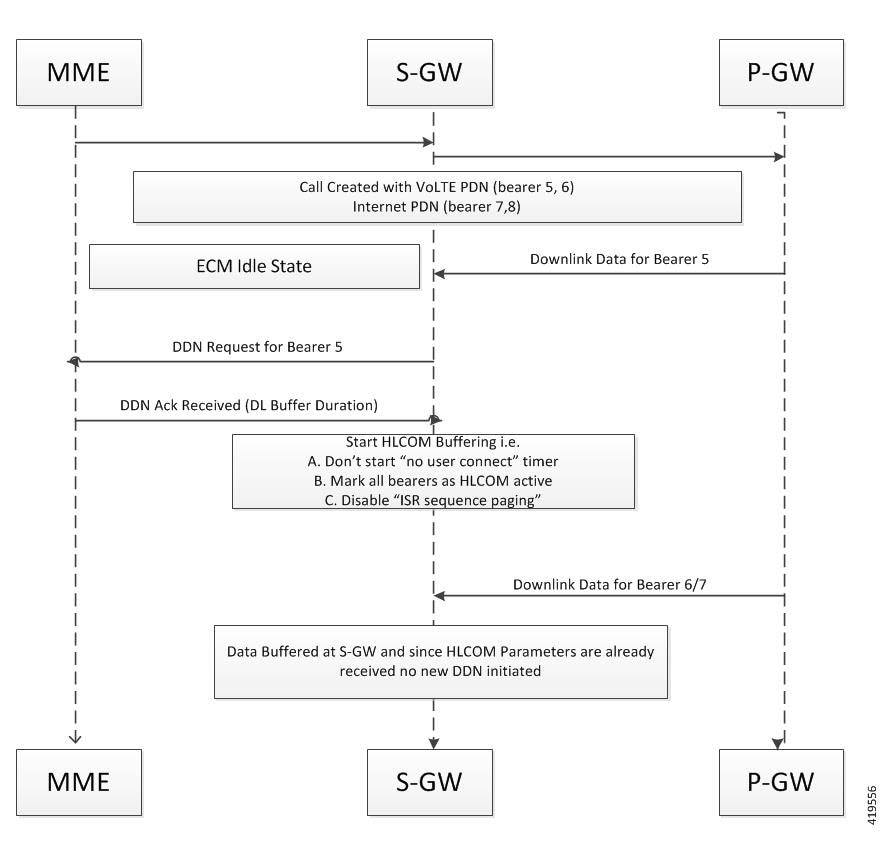 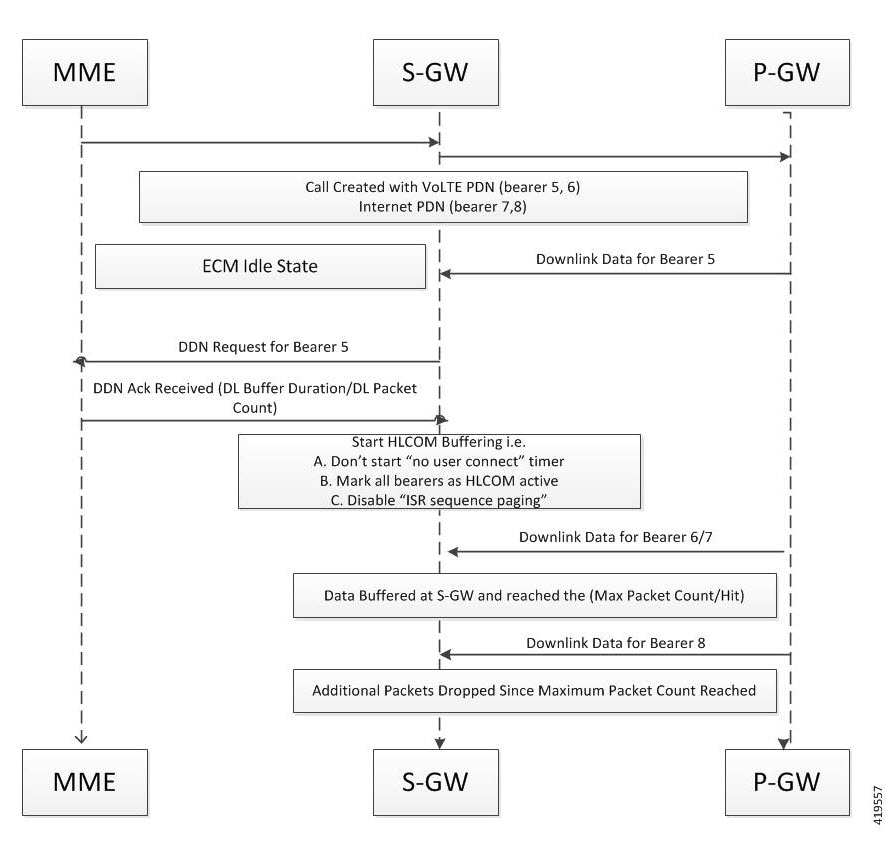 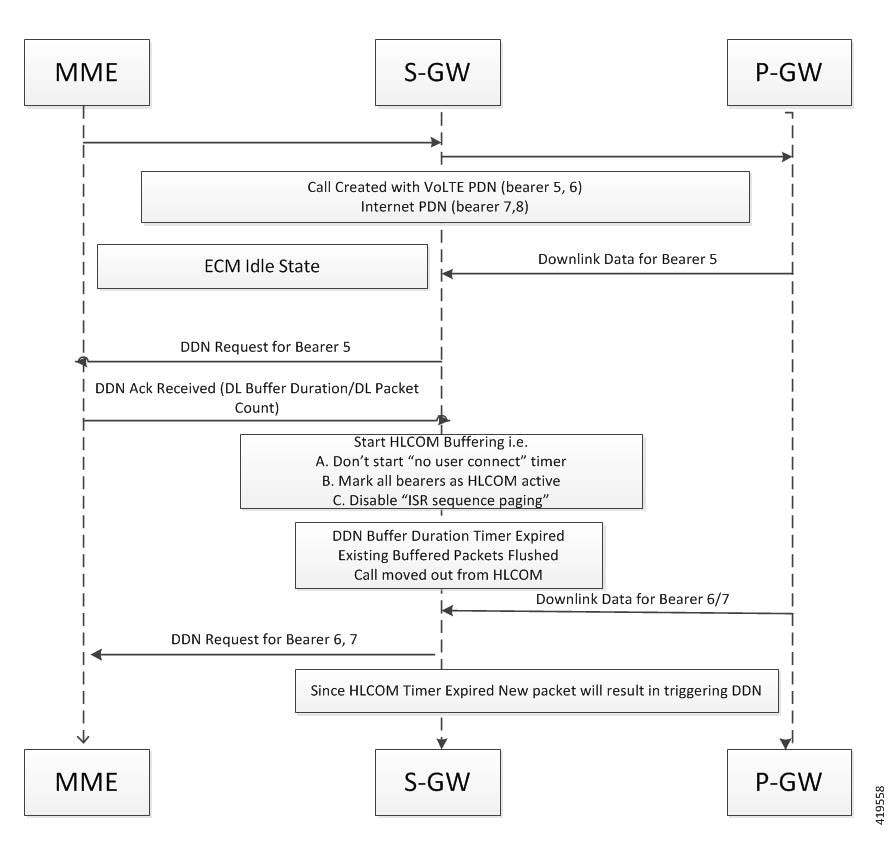 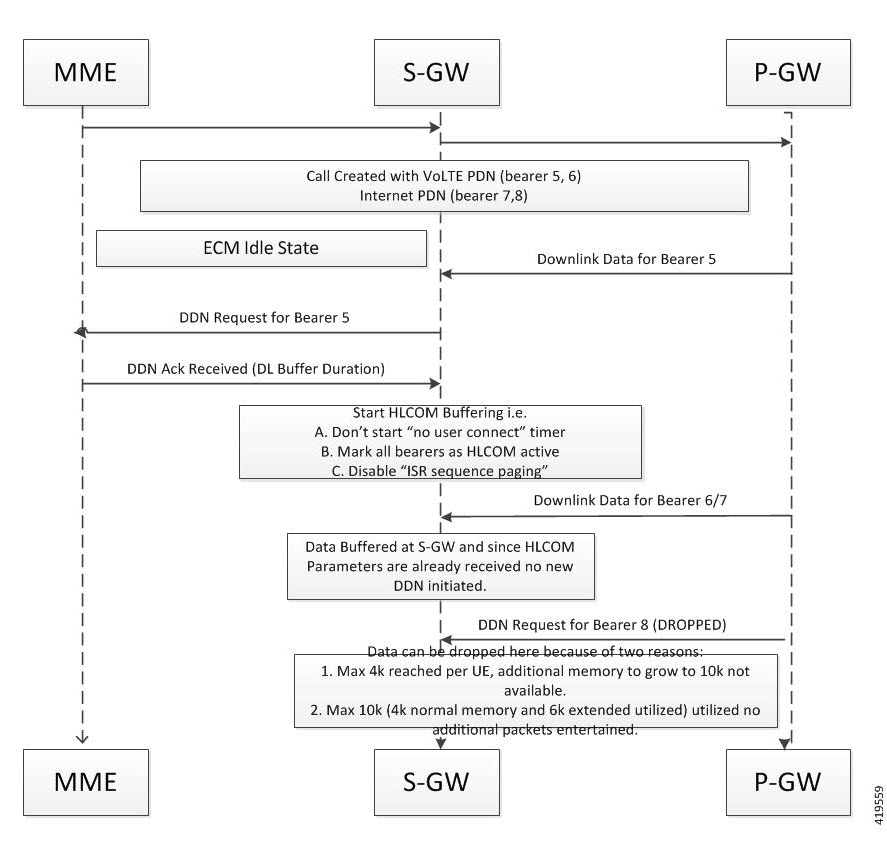 The following sections describe the handoff procedure support for this feature.

In below mentioned call scenarios, S-GW and P-GW are part of SAEGW and the session would be a co-located session. 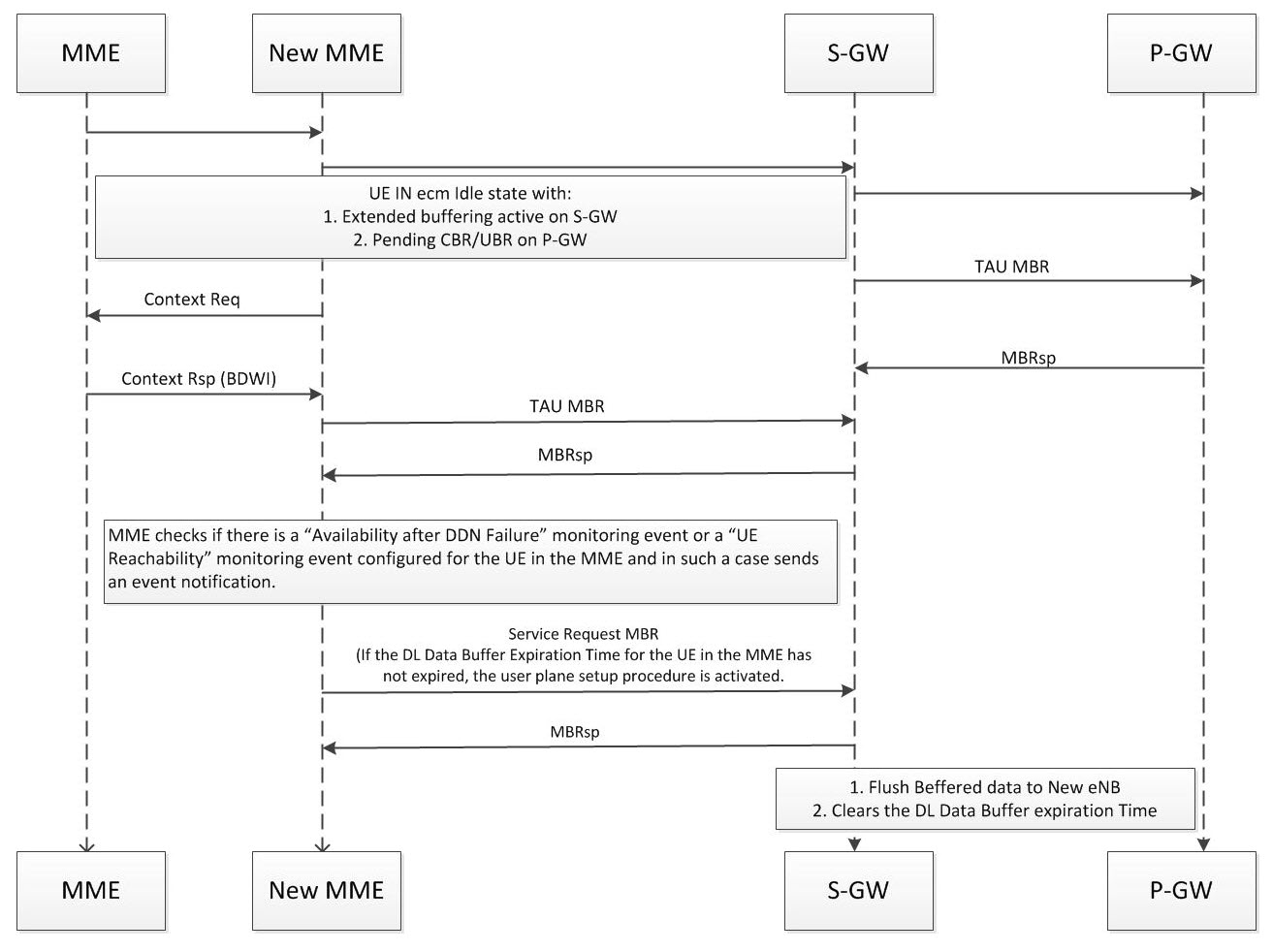 In the following mentioned call scenarios, S-GW and P-GW are part of SAEGW and the session would be a co-located session. 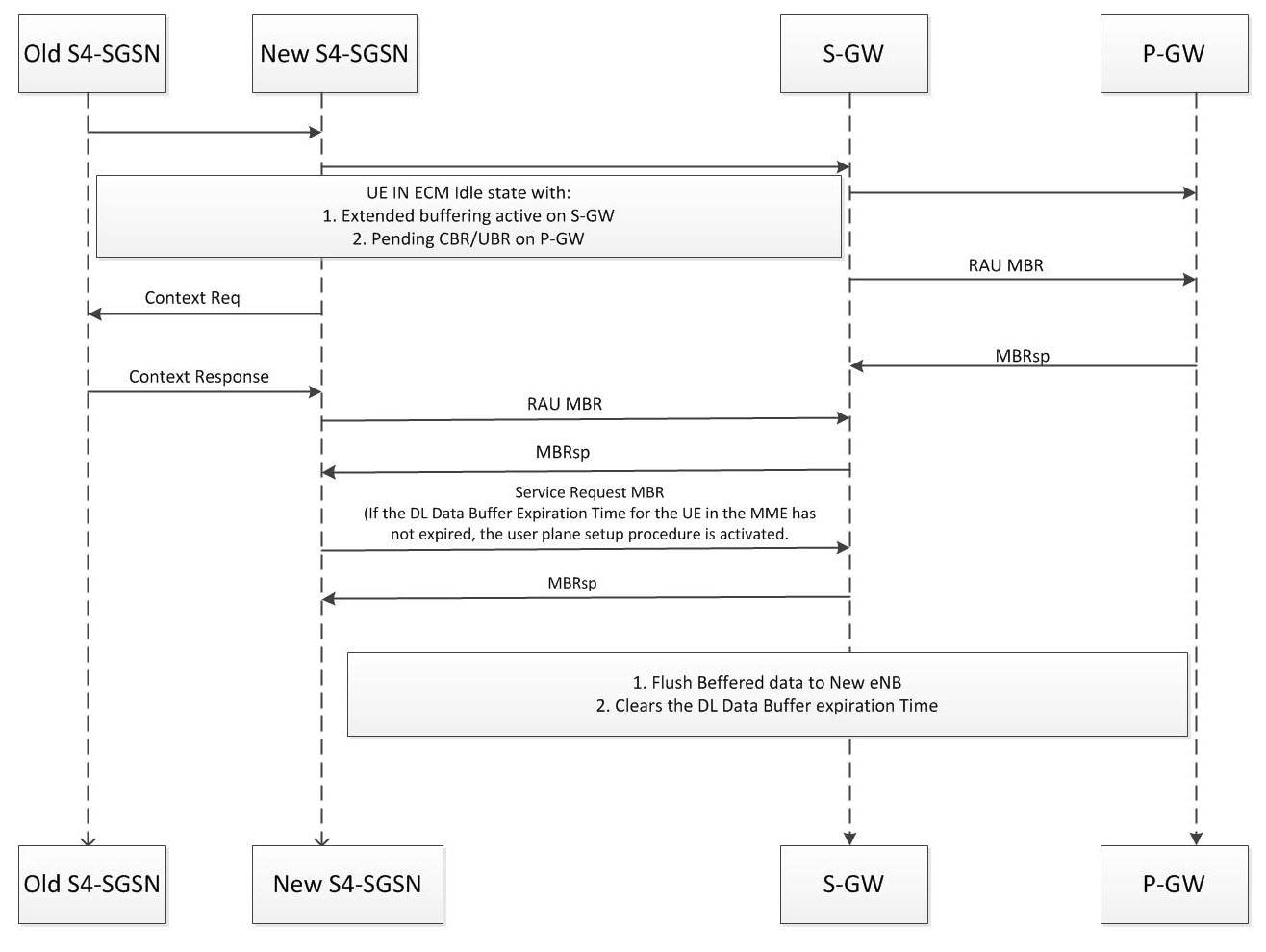 In below mentioned call scenario, S-GW (old or new) and P-GW can be part of SAEGW. 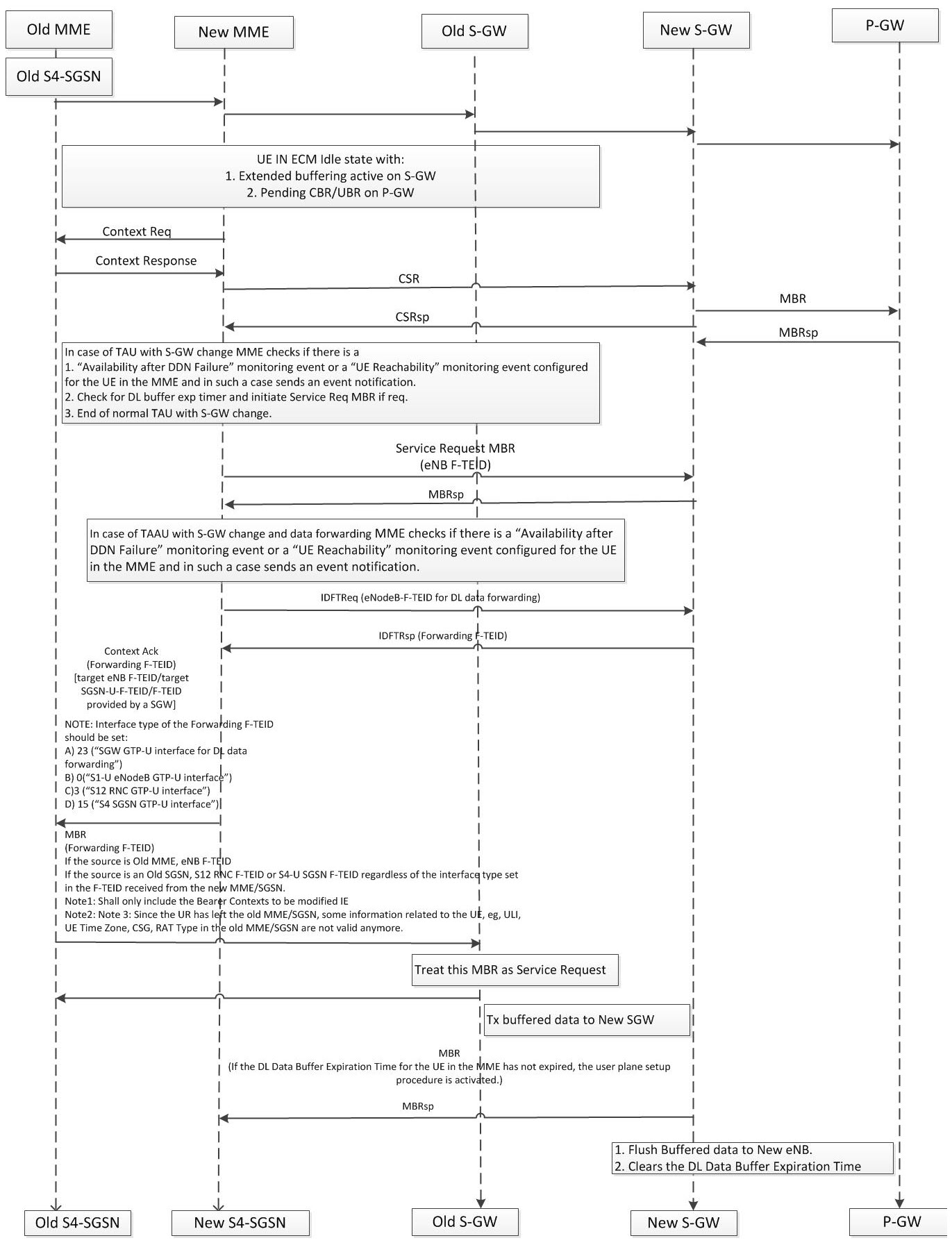 The Non-IP PDN feature complies with the following standards:

Following are the limitations of this feature:

This section provides information on how to monitor and troubleshoot using show commands and bulk statistics available to support of this feature.

The following bulk stats have been added to the respective schemas as part of this project:

This section provides information regarding show commands and their outputs for the HLCOM feature. Statistics have been added at three levels:

The following command tracks the current memory usage at process level. It shows how much of the actual and extended buffer is in use.

At service level counters have been added for the following reasons:

At service level counters have been added for the following reasons: