An SGSN pool is a collection of SGSNs configured to serve a common geographical area for a radio network. This common part is referred to as the SGSN pool service. SGSN Pooling is also referred to as Iu/Gb flex support based on if the access is 3G or GPRS respectively.

An SGSN pool provides a flexible and resource-efficient architecture with built-in network redundancy for the GPRS/UMTS packet core network. Each BSC/RNC has the ability to connect to all SGSNs in the pool. If any SGSN becomes unavailable, any terminal attached to that SGSN will be automatically re-routed to another SGSN in the pool by the BSC/RNC. This implies that the SGSN pool provides network level redundancy. SGSN failure is discovered by the BSCs/RNCs and the uplink traffic from the terminal is routed to another SGSN in the pool. The substituting SGSN orders the terminal to re-attach and re-activate any PDP contexts. Therefore service availability is maintained. Please note that all SGSNs in a pool are required to have the same capacity, feature sets and scalability and hence the same vendor, failing which might lead to varying subscriber experience across SGSNs.

When an UE connects to an SGSN in the pool, by Attach or Inter-SGSN RAU (ISRAU) procedures, the UE is allocated a Packet Temporary Mobile Subscriber Identity (P-TMSI) containing a Network Resource Identifier (NRI) identifying the SGSN. The BSC/RNC then identifies the SGSN from the NRI, and routes the user data to the correct SGSN. Load-sharing between the SGSN pool members is thus based on the NRI routing algorithm in the BSC/RNC. UEs that have not yet been assigned a P-TMSI, and MSs without matching NRI, are distributed among the pool members by the BSC/RNC according to the traffic distribution procedure. Once a UE has been allocated a P-TMSI, it stays connected to the same SGSN as long as it remains in the pool area. This period can be quite long, since MSs normally keep the P-TMSI even after power off.

A valid license key is required to enable the SGSN Pooling feature. Contact your Cisco Account or Support representative for information on how to obtain a license.

A basic SGSN pool structure is depicted in the diagram below: 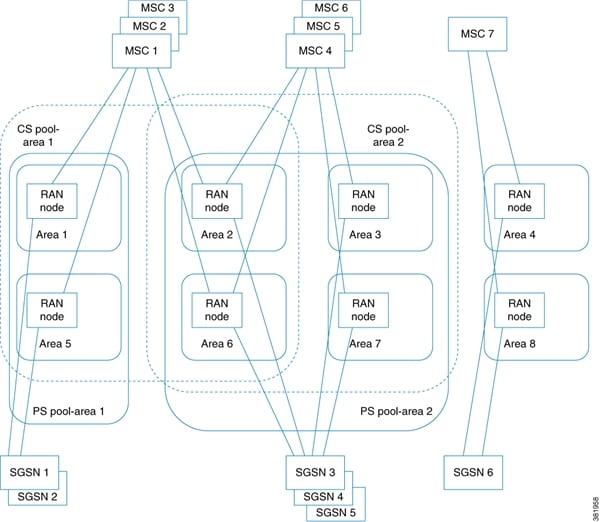 Listed below are the requirements to support pooling:

Every SGSN is configured with one or several NRIs (O&M). One of these NRIs is part of every Packet temporary Mobile Subscriber identity (P-TMSI) which the SGSN assigns to an UE for connecting via pooled BSC/RNC. For non-pooled BSC/RNC SGSN sets all NRI bits to "0". The P-TMSI allocation mechanism in the SGSN generates P-TMSIs which contain one of the configured NRIs in the relevant bit positions. A NRI has a flexible length up to "6" bits). The maximum number of SGSNs in a pool is limited to "63" (One NRI value reserved for NULL-NRI).

P TMSI is of length "32" bits, where the two top most bits are reserved and always set to "11". The NRI field is included at the beginning of P TMSI starting at bit "23" and down up to bit "18". The most significant bit of the NRI is located at bit "23" of the P TMSI regardless of the configured length of the NRI

Once a subscriber attaches to a new SGSN, a new P-TMSI is allocated by the P-TMSI re-allocation procedure. That P-TMSI contains the NRI of the SGSN. This is also the case when an Inter-SGSN RA update or an Inter-System Change (IRAT) occurs.

The LAC and RAC information is made available by off-loading the SGSN to the UE in the GMM_ATTCH_ACCEPT/GMM_RAU_ACCEPT message along with the NULL-NRI in the P-TMSI. This value is different from the LAC and RAC that an UE receives from BSS/UTRAN as broadcast information. These parameters are set unique per SGSN node.

The following kinds of SGSN address resolution can be identified:

A NRI based look-up occurs in the following scenarios:

Address resolution without NRI is used for Inter-SGSN RAU between non-pooled areas or between multiple pools. In this case the SGSN context request is routes towards the default SGSN, which in turn relays the GTP message to the right SGSN based on the NRI value in the P-TMSI.

Refer to the configuration section for the procedure to "Configure an Operator Policy".

Mobility Inside the Pool

The distribution of UEs in a pool is handled by the BSCs/RNCs.

Once a P-TMSI containing the NRI of a pool member has been assigned to an UE, the UE stays attached to that pool member as long as it remains in that pool service area. The frequency of inter-SGSN RA updates decreases, as the UE can move over a greater geographical area for one SGSN.

Figure 2. Mobility inside the pool 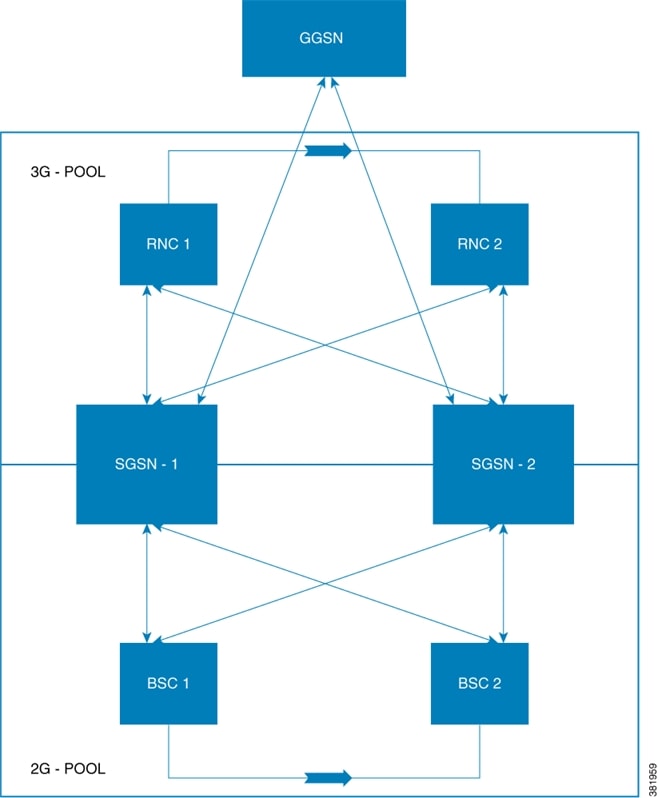 Mobility Outside the Pool

Figure 3. Mobility outside the Pool 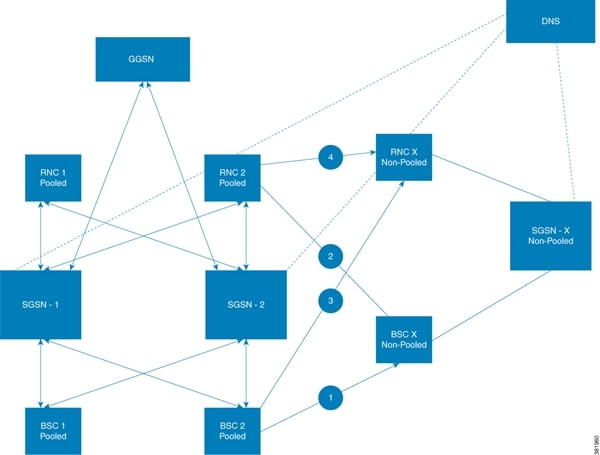 The subscriber movement can be traced through the numbers 1, 2, 3 and 4 in the diagram.

MS offloading is a procedure of offloading the subscribers from one SGSN in the pool to another SGSN within the same pool. Offloading is performed during the following scenarios:

Offloading has to be performed with minimum impact on the end users.

Null-NRI based offloading is carried out in the following three phases:

This phase includes scanning through the remaining UEs and initiating a detach procedure for them. The UEs are requested to detach and re-attach, this results in the UEs moving as described in "Phase 1".

UEs being moved from one SGSN can be stopped from registering to the same SGSN again by issuing a CLI command in BSCs connected to the pool. UEs moving into a pool area may also be stopped from registering into a SGSN being off-loaded in the same manner. The move operation will not overload the network, as throttling is supported for both Attach and Inter SGSN RAU procedures.

IMSI-based offloading is carried in the following three phases:

On receiving an activation trigger from the MS, the subscriber is detached and the re-attach required is set to true. The MS will return an attach in due time, after which the MS is offloaded to another SGSN by setting the Target-NRI and NB-RAI appropriately.

SGSN Pooling support has been extended to S16/S3 interface. The enhancement also includes support for default SGSN functionality for S16/S3 interface as in the case of Gn interface. The peer SGSN in this case is a S4-SGSN. The incoming message (EGTP_CONTEXT_REQ/IDENTIFICATION_REQ) is received from a non-pooled SGSN, it is forwarded to the old-SGSN if the SGSN is configured as default SGSN. The SGSN in a pool is identified on the basis on NRI value and OLD- RAI value. The NRI value is extracted from PTMSI.

If a default SGSN that is serving a pool-area receives EGTP signaling it resolves the ambiguity of the multiple SGSNs per RAI by deriving the NRI from the P-TMSI. The SGSN relays the EGTP signaling to the old SGSN identified by the NRI in the old P-TMSI unless the default SGSN itself is the old SGSN. For default-SGSN functionality to work, static IP address entries are mandatory in the call-control profile.

Messages are relayed by the Default-SGSN (Default SGSN functionality and pooling are enabled) in following cases:

For "Non-local RAI and Null-NRI" and "Non-local RAI and Target-NRI" options, the NB-RAI of other SGSN is considered. It is non-local to the SGSN. No other configuration entries are present at the SGSN other than cc-profile entries.

The MS performs RA Updates and Attachments, which result in a change of the serving SGSN. In these procedures the new SGSN requests MS specific parameters from the old SGSN. The default SGSN node uses the old RA together with the NRI to derive the signaling address of the old SGSN from its configuration data.

Address and TEID for the Control Plane

The SGSN Pooling feature complies with the following standards:

Listed below are the pre-requisite CLI configurations that should be enabled to configure a 2G SGSN Pool:

Listed below are the pre-requisite CLI configurations that should be enabled to configure a 3G SGSN pool:

To Configure a Default SGSN

The following CLI command under the eGTP Service Configuration mode is used to configure the default SGSN:

The default SGSN receives inbound SGSN context request messages and forwards it to the correct SGSN in the pool based on the NRI bits of the P-TMSI. If the incoming message EGTP_CONTEXT_REQ/ IDENTIFICATION_REQ has the hop count IE, the default SGSN decrements the count by one and forwards it to the Old-SGSN. The hop count is not over written even if it is configured. If the hop count IE is missing with incoming message then the then hop count configured gets populated. If no value is configured the default value is chosen. The hop Counter prevents endless relaying of context/identification request. Each relaying SGSN keeps decrementing the hop-counter value if received from the peer-sgsn, otherwise the SGSN includes hop-counter IE. If default-sgsn receives request having hop counter "0", it does not relay the request.

The SGSN offload command is used to configure the MS offloading procedure.

The following CLI command (for phase 1 and phase 2 of offloading) is issued for each GPRS/SGSN service:

The following CLI has to be issued for the phase-3 of offloading:

Consider and SGSN node which was offloaded due to a maintenance requirement, once this SGSN is again operational it will not recover the subscribers attached before the maintenance occurred. In due course this SGSN will be leveraged, with subscribers moved from (partial offload) two or three most loaded SGSNs.

This section provides information regarding show commands and their outputs in support of the SGSN Pooling: