The authorization for the DCC UI resources is controlled by the Admin functionality of the DCC UI. The Authorization system is linked to Roles Administration and provides access control based on role specifications for all the applications installed on the DCC UI.

You can only access role-specific applications for which you are authorized. The access for applications is specific to a role and is automatically denied, if the tabs for accessing the application do not appear in the login. 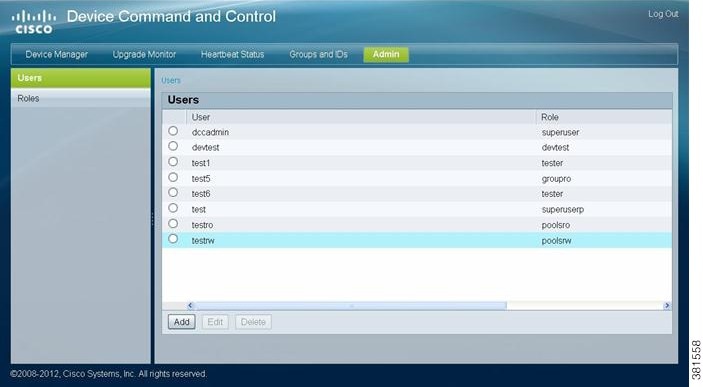 The Pluggable Authentication Module (PAM) is supported for DCC_UI to allow users to log in with their own credentials through any Unix PAM service defined such as LDAP, SSH, and RADIUS.

The DCC UI allows user provisioning as internal or external user for authentication purposes through the Add User and Edit User functionality.

Internal user authentication is handled by the DCC UI application through the dcc_ui database entries.

External user authentication is handled by the PAM through PAM service modules. Such users are not authenticated by the DCC UI.

PAM authentication is driven by the following two preloaded properties in dcc.properties.

All users must be provisioned in the DCC_UI before login to specify the role authorization for all users.

You can define roles that can then been assigned to various users that should have similar access rights to the DCC UI.

Use this task to edit an existing role.

The Edit User screen facilitates an administrator to edit an existing user for a given application.

A user can be deleted from the User Administration interface.

This table lists the status messages that can be displayed when adding or updating a user: