This chapter describes how to use the Cisco Unity Express Script Editor in the following sections: 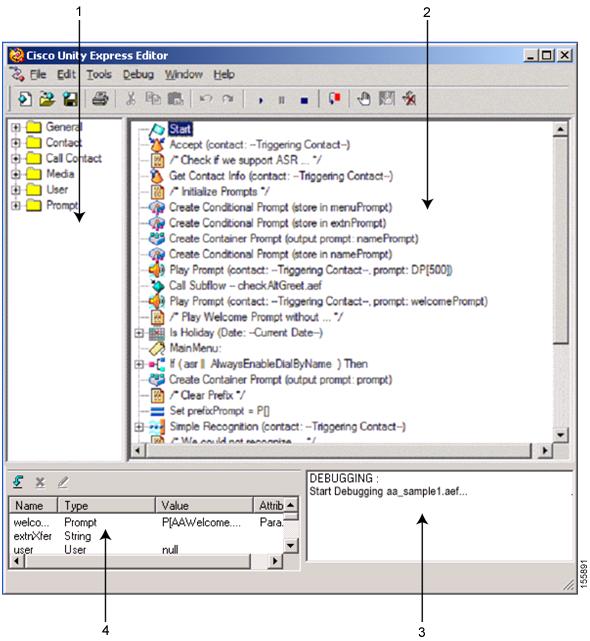 To create your script, click a step in the Palette pane and drag it on top of the step that it should follow in the Design pane. Each step performs a specific function and creates a portion of the underlying programming. You can customize most of the steps after you have placed them in the Design pane.

To add a step to your script, drag the step icon from the Palette pane and drop it onto the step that it will follow in the Design pane. Place the steps in logical order for the script that you are building.

To change the order of a step in the script, drag the individual step icon from its existing location to its new location. To delete a step, select the step icon and press the Delete key.

To end the script, click the General palette and drag End to your script. The End step appears.

Many steps have output branches under which you can add steps to provide the desired script logic based on the End condition of the step. 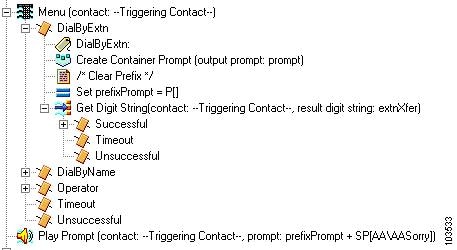 As shown in the expanded Menu step in Figure 3, the Menu step has five output branches:

At run time, each script follows a hierarchical sequence, as indicated by the vertical lines connecting steps. In Figure 3, for example, if the script reaches the Timeout output branch of the Get Digit String step, the script moves to the next step at the level of the Menu step that, in this example, is the Play Prompt step.

Most steps have properties that can be modified according to the needs of the script. Depending on the step, the properties can be grouped under multiple tabs. To display the properties window for a step, right-click the step in the Design pane and click Properties in the popup menu, as shown in the Label step Properties dialog box example in Figure 4. 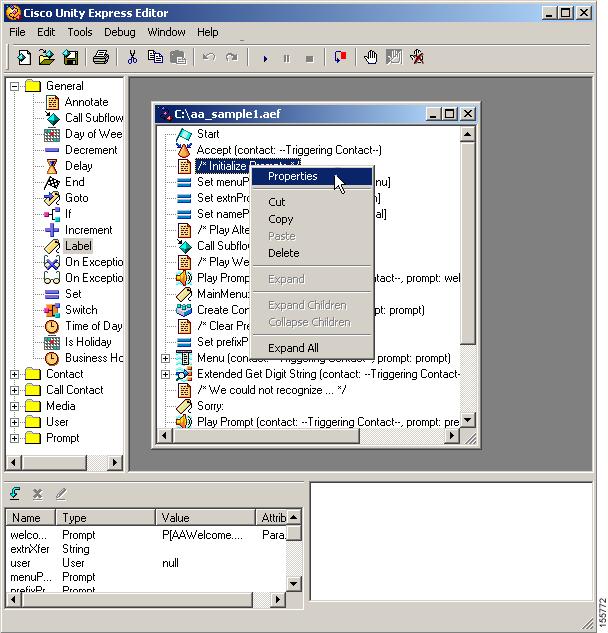 The value of a variable can change during execution.

Variables store user-defined data or data resulting from the completion of a step or expression. Any step in your script can use a variable after it has been defined. Because data comes in different forms, you must also define the variable type before you can use it. Variables are grouped into the following basic built-in variable types (see the "Basic Built-in Variable Types" section):

Because data comes in different forms, you must also define the variable before you can use it. Click the:

New Variable icon at the top left corner of the Variable pane to define a new variable.

Modify Variable to change the variable to the selected variable. 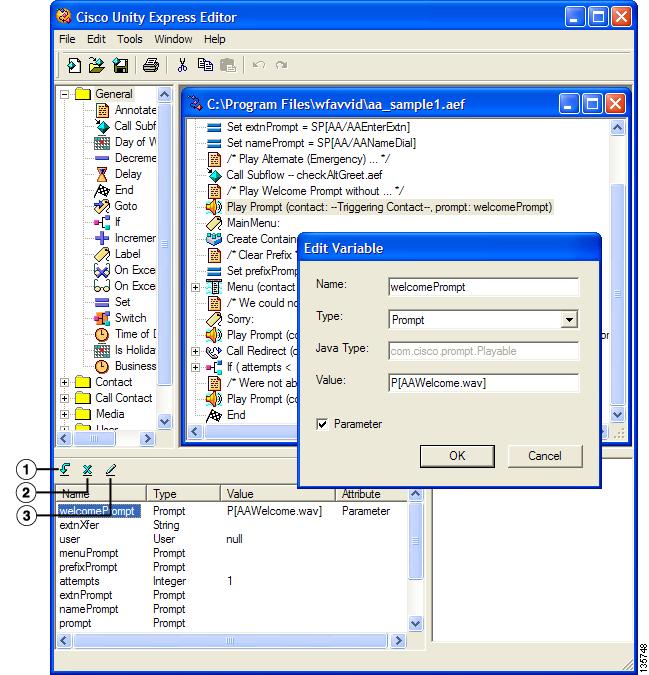 Table 3 describes the fields in the Edit Variable window.

To declare variables as parameters, click Parameter in the Edit Variables dialog box. The set parameter feature allows you to set the value for a parameter in the auto attendant (AA) web interface. Because the value is initialized at configuration time for the script that uses it, you can change the value without editing the script in the Cisco Unity Express Script Editor. Such a variable is called an exported variable or parameter.

For example, when you add a new automated attendant by using the AA Wizard, the second window of the AA wizard (the Script Parameters window) provides a list of the parameters with their default or current values. You can modify the values in this list.

The Debug pane is not available in this release.

There is no guarantee of the continued availability of any system prompt in future releases.

User prompts: Defined by the user and managed by the administrator using the Voice Mail > Prompts web page of the Cisco Unity Express GUI administrator interface or by calling in to the Greeting Management System. The script retrieves both user and system prompts from the Prompt Repository.

All Media and Prompt steps support prompts specified in the following ways:

String expression: User-defined prompts that are located in the User Prompts directory.

You must define all prompts played back and recorded with a RIFF header of type WAVE and G711 u-law format.

Expressions are useful if you do not know the exact prompt value at design time and instead would rather enter a formula that can be evaluated later at run time. The resulting type of the expression must match the expected input type or types (which you check at design time).

Many steps include an Expression Editor (...) button (1 in Figure 6) in the customizer window, which you can use to enter an expression.

After you enter the expression, click OK. The Expression Editor closes. 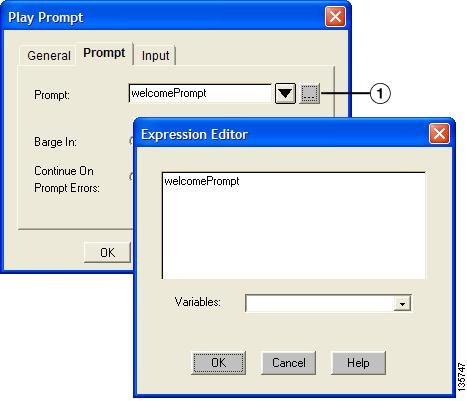 To create expressions, use operators to combine variables and other values (also known as operands) to produce a result that is not known until the script is run. Operator priority refers to the order in which the operators are evaluated if there is more than one operator in an expression. The following operators are listed in order of priority:

Parentheses (...): Works with any expression and allows you to give priority to the expression contained in the parentheses.

Number operands are properly promoted to a valid type before testing.

Number operands are properly promoted to a valid type before testing.

Comparison operands work only on String, Character, and Number operands.

Testing for the <null> constant is supported by the two equality operators.

And (&&): Works only with Boolean expressions.

Or (||): Works only with Boolean expressions.

If at least one of the operands is a String, then the other one if it is not a prompt, one is converted to a String by using the String.value() method. The result is a new String corresponding to the concatenation of the String representation of both operands. Typically, the String.valueOf() method simply calls the toString() method of the object being concatenated, or returns the string "null" if the object is null.

If the operands are Characters, then they are concatenated together, resulting in a new String.

The Cisco Unity Express Script Editor provides a variety of ways to handle exceptions. Exceptions are errors in scripts from an unexpected user input or an unexpected result in scripts.

The Continue on Prompt Errors option allows the script to continue to run when the script receives invalid input (for example, Invalid Audio Format or File Not Found).

The Cisco Unity Express Script Editor provides the Continue on Prompt Errors option in the customizer windows of steps in the Media palette. (See the "Media Steps" section on page 126.) For example, Figure 7 shows the Prompt tab of the Get Digit String customizer window. 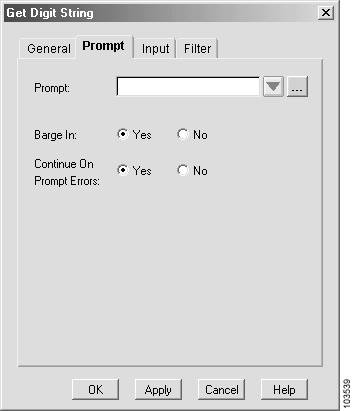 When enabled, the step continues with the next prompt in the list of prompts to be played back. If the prompt is last in the list, the script waits for caller input.

When you enable Continue on Prompt Errors, you instruct the script to ignore prompt errors and continue as if the playback of a particular prompt was successful. For example, in a sequence of prompts "1 + 2 + 3", if prompt #1 fails, the step will continue with prompt #2. If prompt #3 fails, the step continues to wait for caller input as if prompt #3 had been properly played back.

When you disable Continue on Prompt Errors, the media steps generate an exception, which can then be handled in the script.

Available prompt exceptions are the following:

Error output branches are parts of a script that provide instructions on what to do when typical errors occur.

Figure 8 shows error output branches under a Call Redirect step in a script.

The script provides error branches only for expected error conditions, not for system errors.

In this figure, the Call Redirect step includes logic for both an invalid extension and an out-of-service extension.

The registration process affects the complete script. The assigned handler activates the script regardless of whether the exception occurs (before, during, or after the given step). After the step runs, the handler is registered until either a new handler is reregistered or the exception is cleared with the On Exception Clear step.

If no exception handlers are registered, the script aborts and error handling falls back to the last level of error handling, which is the default script.

The default script is the last level of user-defined error handling before the Cisco Unity Express Script Editor applies a default system treatment to all active contacts.

The main script aborts, which happens for either of the following reasons:

The Cisco Unity Express application software is unable to invoke the primary script because it has not been properly validated.

An incoming call must be aborted because the Cisco Unity Express application software has reached its limit for the number of simultaneous sessions for the application.

The default script provides only a final feedback to the contact regarding the system problem and does not continue the service or restart the service.

The system applies the CallContact script if the contact is still active after the system executes the default script (if any). The CallContact script plays back the prompt, "We are currently experiencing system problems, please call back later" as an announcement, followed by a fast busy signal.

Script interruption is a feature that allows external events to interrupt the current processing of a script in order to return to another part of the script or stop the execution of the script.

Use script interruption typically when the script needs to be notified that one of its contacts has been remotely terminated, such as when the caller hangs up.

In every case, any event that triggers the need to interrupt the script can occur at any time while the script executes other steps.

If you want two consecutive steps to run without the possibility of interruption, you must move these two steps to a subflow where you can disable interruptions completely while the script processes that subflow.

Cisco Unity Express Script Editor has an "interruptible" option for some steps that allows you to indicate whether or not the script can interrupt the step from within if an external event occurs.

When a contact terminates remotely, the script performs one of the following actions:

When a caller hangs up, the script is interrupted (if possible) and a ContactInactiveException is generated. This exception can then be handled with the OnExceptionGoto step of the General palette.

When a caller hangs up and no exception handling logic is available, the script immediately aborts.

When managing multiple contacts, the OnExceptionGoto step cannot differentiate which contact was remotely terminated. Instead, it must specify a Label to which it can loop through all known contact variables and use the Get Contact Info step of the General palette to search for an Active flag.

This section describes how to install the Cisco Unity Express Script Editor application.

The Cisco Unity Express Script Editor is a Microsoft Windows application. The computer you install it on must be running one of the following operating systems:

Windows NT (Workstation or Server) with Service Pack 4 or later

The InstallShield Wizard appears and begins extracting files for the installation. (This process may take a few minutes.)

Follow the prompts to install the application. A default installation is acceptable for most users: click Yes and Next buttons when prompted.

The default installation path on your hard drive is C:\Program Files\wfavvid\WFCCNEditor.exe.