Call monitoring and recording solutions provide a way to automatically monitor and record audio and video calls that traverse various components in a Unified Communications and Collaboration solution, such as Cisco IP Phones, Cisco Unified Border Element devices, or Cisco switches. These recordings can then be used by call centers and other enterprise for various purposes such as compliance purposes, transcription and speech analysis, or for podcasting and blogging purposes. This chapter provides an overview of various call recording solutions available for Cisco Unified Communications and Collaboration solutions for both audio and video calls. The chapter also outlines basic design considerations for call recording solutions embedded within a Cisco Unified Communications and Collaboration solution.

What's New in This Chapter

Table 25-1 lists the topics that are new in this chapter or that have changed significantly from previous releases of this document.

Types of Monitoring and Recording Solutions

This section describes the following types of call recording and monitoring solutions:

Recording solutions based on a Switched Port Analyzer (SPAN) use the packet sniffing technology for recording calls. SPAN is a method of monitoring network traffic. When SPAN is enabled on a switch port or VLAN, the switch sends a copy of all network packets traversing that port or VLAN to another port where a recording or monitoring server (such as Cisco Unified Contact Center Express, Cisco Unified Workforce Optimization Quality Management, or a third-party recording server, for example) analyses those packets. It detects and decodes the VoIP packets embedded in the network traffic and stores them as audio on a storage device. SPAN can be enabled on the ports connected to Cisco Unified Communications Manager (Unified CM), a Cisco Voice Gateway, or Cisco IP Phones, as required. For example, for recording internal calls between IP phones, SPAN should be enabled on switch ports connected to the IP phones.

Figure 25-1 illustrates a SPAN-based recording solution deployment for recording internal calls. The ports marked as source ports connected to IP phones are mirrored to the destination port connected to the recording server. In addition, network traffic flow needs to be considered for appropriate bandwidth provisioning when port mirroring is enabled. Also consider the type of servers deployed for applications such as Cisco Unified CM and Cisco TelePresence Recording Server, especially when hosting these applications in a virtualized setup.

This section reviews some common SPAN-based deployments with virtualization enabled and lists some of the limitations. Note that the SPAN feature requires the source and destination ports to be on the same switch. VMware provides support for the SPAN feature only on Cisco Video Distribution Suite (VDS) with VMware vSphere release 5.0.

In a virtualized setup, some of the Unified Communications and contact center applications and the port analyzer application may be deployed on virtual machines on the same host or on different hosts. There are some limitations to SPAN-based recording solutions in a virtualized setup. For example, the following features are not supported for deployments of Cisco Unified Contact Center Enterprise (Unified CCE) with virtualization:

Cisco Unified CM silent monitoring and call recording solutions provide the ability to monitor and record customer conversations for compliance purpose. The Silent Call Monitoring feature allows a supervisor to listen to a conversation between an agent and a customer with neither the agent nor the customer aware of the supervisor's presence on the call. The Call Recording feature allows system administrators or authorized personnel to archive conversations between the agent and the customer.

The call recording device is configured on Unified CM as a SIP trunk device. For recording, the agent phone forks the two streams to the recording server. The two streams, one for the agent voice and one for the customer voice, get recorded separately. The recorded streams can be mixed to produce the conversation using third-party applications. 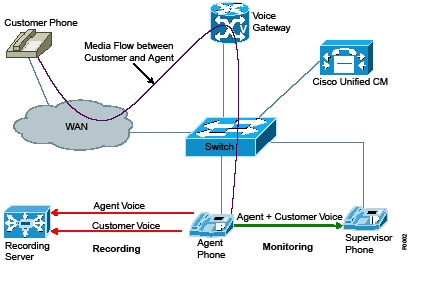 For details on the Unified CM Silent Call Monitoring and Call Recording features, refer to the latest version of the Cisco Unified Communications Manager Features and Services Guide , available at

Cisco MediaSense is a SIP-based, network-level service that provides voice and video media recording capabilities for network devices. It is fully integrated into the Unified CM architecture and can capture and store VoIP conversations that traverse appropriately configured Unified CM IP phones or Cisco Unified Border Element devices by invoking media forking capabilities on the IP phones and Cisco Unified Border Element devices. In addition, an IP phone user or SIP endpoint device may call the Cisco MediaSense system directly in order to leave a recording that consists of only media generated by that user. Such recordings may include video as well as audio, thus offering a simple and easy method for recording video blogs and podcasts. While the recording is in progress, it can also be streamed live using a media player such as VLC or Apple QuickTime. Cisco MediaSense uses an HTTP interface to access and play back recordings.

Note Most but not all Cisco Unified IP Phones support media forking. Those that do not support media forking cannot be used for phone-based recording. For a list of IP phones that support phone-based media recording with Cisco MediaSense, refer to the latest version of the Solution Reference Network Design for Cisco MediaSense, available at http://www.cisco.com/en/US/products/ps11389/products_implementation_design_guides_list.html.

Cisco MediaSense also provides an administration and reporting interface to configure the cluster and manage recordings. It provides secure media storage on an encrypted storage area network (SAN). It does not currently support secure media relay using sRTP or other means.

Cisco MediaSense can be deployed only on top of a VMware hypervisor running on a Cisco C-Series or B-Series platform. It is deployed as a single server or as a cluster of up to a five nodes, depending upon the required capacity of the system. It can also be deployed on a Cisco Services-Ready Engine (SRE) platform with up to two SRE modules. In a multi-node setup, there are three types of servers:

When deploying multiple Cisco MediaSense clusters, Cisco recommends partitioning the IP phones carefully among the various clusters so that each IP phone gets recorded by only one cluster. 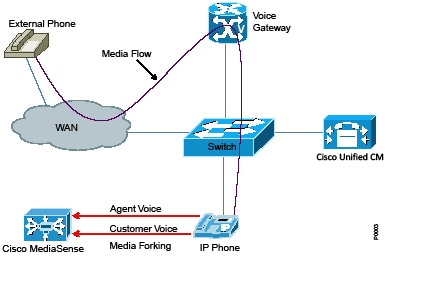 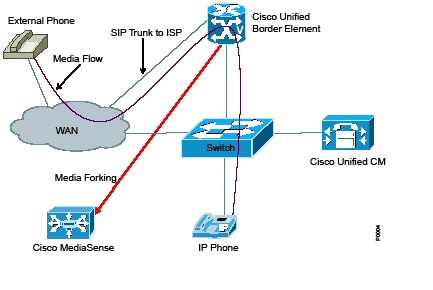 For more details on other supported deployments available with Cisco MediaSense, refer to the section on Solution-Level Deployment Models in the latest version of the Solution Reference Network Design for Cisco MediaSense , available at

These solutions are described in details in the following documents:

The Cisco TelePresence Content Server is a network appliance that provides the ability to record and stream Cisco TelePresence and third-party video conferences and multimedia presentations that can be distributed to media devices or shared through applications such as Cisco Show and Share. This deployment does not support all the features (for example, SIP functionality) that are available in a TelePresence Content Server deployment with Cisco VCS.

This is the most simplistic deployment but is not recommended. This deployment does not provide any call control and has other limitations such as support for only a single recording alias.

Figure 25-6 illustrates a sample deployment where the Cisco TelePresence Content Server is registered to Cisco VCS. The Cisco TelePresence System endpoint and Cisco EX90 are also registered to Cisco VCS. A Cisco Media Experience Engine (MXE) 3500 is also used to transcode the video recordings and publish to Cisco Show and Share. The TelePresence Content Server records the call between the two endpoints by joining the TelePresence bridge. It then sends the recorded video to the MXE 3500 by means of File Transfer Protocol (FTP). The MXE 3500 transcodes the video and publishes it to the Cisco Show and Share application. Capacity Planning for Monitoring and Recording

Due to the complexity associated with sizing, all deployments must be sized with the Cisco Unified Communications Sizing Tool, available to Cisco employees and partners only (with proper login authentication) at