This chapter provides information about Computer telephony integration (CTI) which enables you to leverage computer-processing functions while making, receiving, and managing telephone calls. CTI applications allow you to perform such tasks as retrieving customer information from a database on the basis of information that caller ID provides. CTI applications can also enable you to use information that an interactive voice response (IVR) system captures, so the call can be routed to the appropriate customer service representative or so the information is provided to the individual who is receiving the call.

Computer telephony integration (CTI) enables you to leverage computer-processing functions while making, receiving, and managing telephone calls. CTI applications allow you to perform such tasks as retrieving customer information from a database on the basis of information that caller ID provides. CTI applications can also enable you to use information that an interactive voice response (IVR) system captures, so the call can be routed to the appropriate customer service representative or so the information is provided to the individual who is receiving the call.

For a description of Cisco CTI applications, see the Computer Telephony Integration Applications.

The following list contains descriptions of some Cisco CTI applications that are available: 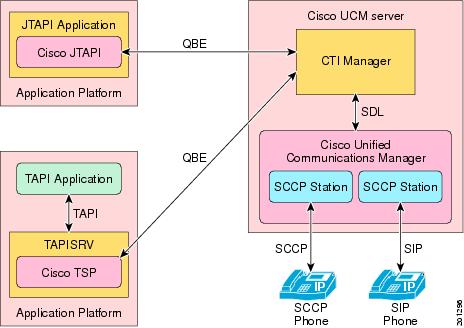 If the configured limits are exceeded, CTI generates alarms, but the applications continue to operate with the extra devices. For more information on CTI Super Provider, see the User Management and CTI Controlled Devices.

CTI applications can terminate media on CTI ports and CTI route points in the following ways:

When an outbound call is pending on an SCCP device and is not yet connected, Cisco Unified Communications Manager does not process call setup requests for that device until the first call is connected. If you are using a CTI application for outbound dialing, Cisco recommends that you configure an interval between outbound calls to ensure that pending calls are connected before new call requests are initiated.

For phones that are running SIP, enbloc dialing always gets used even if the user first goes off hook before dialing digits; the phone will wait until all the digits are collected before sending the digits to Cisco Unified Communications Manager. This means that the dialing call state notification will only get generated after enough digits are pressed on the phone to match one of the configured dialing patterns. In all cases, the dialing state notifications will always get generated prior to the call being routed to the destination (as is the case with phones that are running SCCP).

Phones that are running SIP control when and how long to play reorder tone. When a phone that is running SIP receives a request to play reorder tone, it releases the resources from Cisco Unified Communications Manager and plays reorder tone. Therefore, the call appears to be idle to a CTI application regardless of when reorder tone is played on the phone. In these scenarios, applications can receive and initiate calls from the phone regardless whether reorder tone plays on the phone. Because resources have been released on Cisco Unified Communications Manager, the call does not count against the busy trigger and maximum number of call counters (that are configured on the Directory Number Configuration window).

A CTI route point virtual device can receive multiple, simultaneous calls for application-controlled redirection. You can configure one or more lines on a CTI route point that users can call to access the application. Applications can answer calls at a route point and can also redirect calls to a CTI port or IP phone. When a CTI application requests to redirect a call by using the Redirect API, Cisco Unified Communications Manager uses the configuration for the line/device calling search space for the redirected party.

Route points can receive multiple, simultaneous calls; therefore, applications that want to terminate media for calls at route points must specify the media and port for the call on a per-call basis. CTI route points support the following features:

When a call arrives at a route point, the application must handle (accept, answer, redirect) it within a specified time. To configure the time that is allowed to answer a call, use the Cisco CallManager CTI New Call Accept Timer service parameter. Use the Directory Number Configuration window in Cisco Unified Communications Manager Administration to configure the number of simultaneous active calls on the route point.

Applications that are identified as users can control CTI devices. When users have control of a device, they can control certain settings for that device, such as answer the call and call forwarding.

The maximum number of CTI-controlled devices per node varies by server class as follows:

To allow CTI applications access to certain CTI capabilities, ensure the end user or application user that is associated with the application are added to one or more of the following CTI-related user groups:

Applications That Monitor and Control All CTI-Controllable Devices

If a CTI application monitors a call park number, you must add the application to the Standard CTI Allow Call Park Monitoring user group.

CTI provides recovery of failure conditions that result from a failed Cisco Unified Communications Manager node within a cluster and failure of a CTIManager. This section describes the failover and fallback capabilities of the following components:

When a failed Cisco Unified Communications Manager node comes back in service, the CTIManager rehomes the affected CTI ports/route points to their original Cisco Unified Communications Manager. The rehoming process starts when calls are no longer being processed or active on the affected device. Because devices cannot be rehomed while calls are being processed or active, the rehoming process may not occur for a long time, especially for route points that can handle many simultaneous calls.