The following table summarizes the requirements for each provisioning method. In addition to these requirements, your deployment must meet the general system requirements that are described in this guide.

If you are using flow-through provisioning, you must install a system patch and apply a CLI property. Refer to the below list for instructions that apply to your BroadWorks release:

For details on how to customize branding, refer to Configure Advanced Branding Customizations.

Customer Templates allow you to define the parameters by which customers and associated subscribers are automatically provisioned on Webex for Cisco BroadWorks. You may configure multiple Customer Templates as required, but when you onboard a customer it is associated with only one template (you cannot apply multiple templates to one customer).

Some of the primary template parameters are listed below.

Reseller and Enterprises or Service Provider and Groups?

Decide how you want subscribers to authenticate when they log in to Webex. You can assign the mode using the Authentication Mode setting in the Customer Template. The following table outlines some of the options.

With BroadWorks authentication, we recommend that you configure UTF-8 encoding for the authentication header. UTF-8 resolves an issue that can occur with passwords that use special characters whereby the web browser does not encode the characters properly. Using a UTF-8 encoded, base 64-encoded header resolves this issue.

You can configure UTF-8 encoding by running one of the following CLI commands on the XSP or ADP:

Are you going to sub-license Webex for Cisco BroadWorks to another service provider? In this case, each service provider will need a distinct partner organization in Webex Control Hub to allow them provision the solution for their customer base.

When you are using flowthrough provisioning, the provisioning URL that you enter in BroadWorks is derived from the template in Control Hub. You can have multiple templates, and therefore multiple provisioning URLs. This enables you to select, on an enterprise by enterprise basis, which package to apply to subscribers when they are granted the Integrated IM&P service.

The configuration choices related to this decision are detailed in Configure Application Server with Provisioning Service URL.

For added security, the Provisioning Adapter Proxy lets you use an HTTP(S) proxy on the Application Delivery Platform for flowthrough provisioning between the AS and Webex. The proxy connection creates an end-to-end TCP tunnel that relays traffic between the AS and Webex, thereby negating the need for the AS to connect to the public internet directly. For secure connections, TLS can be used.

This feature requires that you set up the proxy on BroadWorks. For details, see Cisco BroadWorks Provisioning Adapter Proxy Feature Description.

All subscribers must have BroadWorks licenses and a primary number or extension.

Webex uses email addresses as primary identifiers for all users. If you are using flowthrough provisioning with trusted emails, then your users must have valid addresses in the email attribute in BroadWorks.

Your admins must use their Webex accounts to sign in to Partner Hub.

Servers in Your Network and Software Requirements

To download the English version of the Webex App, go to https://www.webex.com/webexfromserviceproviders-downloads.html. The Webex App is available on:

To download a localized version of the Webex App, use one of these links:

Following are the DTAF files you need to load onto your Application Servers to support the Webex App as a calling client. They are the same DTAF files as used for UC-One SaaS, however there is a new config-wxt.xml.template file that is used for the Webex App.

To download the latest device profiles, go to the Application Delivery Platform Software Downloads site to get the latest DTAF files. These downloads work for both ADP and XSP.

All Webex for Cisco BroadWorks users must have an Identity/Device Profile assigned in BroadWorks that uses one of the above device profiles in order to make calls using the Webex App. The profile provides the configuration that allows the user to place calls.

You will need Security Certificates, signed by a well-known Certificate Authority and deployed on your Public facing XSPs, for all required applications. These will be used to support TLS certificate verification for all inbound connectivity to your XSP servers.

These certificates should include your XSP public fully qualified domain name as Subject Common Name or Subject Alternate Name.

The exact requirements for deploying these server certificates depends on how your public facing XSPs are deployed:

The following diagram summarizes where the CA-signed public server certificate needs to be loaded in these three cases: 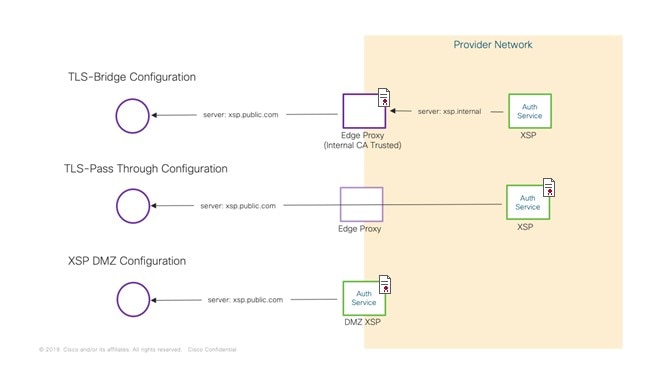 The publicly supported CAs that the Webex app supports for authentication are listed in Supported Certificate Authorities for Webex Hybrid Services.

TLS Certificate Requirements for TLS-passthrough Proxy or XSP in DMZ

The exact requirements for deploying this Webex CA certificate chain depends on how your public facing XSPs are deployed:

The following diagram summarizes the certificate requirements in these three cases:

(Option) Certificate Requirements for TLS-passthrough Proxy or XSP in DMZ

The preceding Ingress and Egress Rules firewall tables document only the connections that are specific to Webex for Cisco BroadWorks. For general information on connections between the Webex app and the Webex cloud, see Network Requirements for Webex Services. This article is generic to Webex, but the following table identifies the different sections of the article and how relevant each section is to Webex for Cisco BroadWorks.

The Webex Cloud microservices must be able to find the Broadworks XSP server(s) for connecting to the Xsi interfaces, authentication service and CTI.

Webex Cloud microservices will perform DNS A/AAAA lookup of the configured XSP hostname and connect to the returned IP Address. This could be a load balancing edge element, or it could be the XSP server itself. If multiple IP Addresses are returned, the first IP in the list will be selected. SRV lookup are not currently supported.

When the Webex microservices send a request to the XSP/Load Balancer and the request fails, several things can happen:

Each request is tried 3 times before a failure is reported back to the microservice.

When an IP is in the blocked list, it will not be included in the list of addresses to try when sending a request to a XSP. After a predetermined period of time, a blocked IP expires and goes back in the list to try when another request is made.

The status of the connectivity of the Webex Cloud services to the XSPs or Load Balancers can be seen in Control Hub. Under a BroadWorks Calling Cluster, a connection status is displayed for each of these interfaces:

The connection status is updated when the page is loaded or during input updates. The connections statuses can be:

The following services use the microservices to connect to the XSPs and are impacted by the XSP interface availability:

The SRV can resolve to multiple A/AAAA targets. However, each A/AAAA record must map to a single IP address only. If there are multiple XSPs in a DMZ behind the load balancer/edge device, it is required that the load balancer be configured to maintain session persistence to route all requests of the same session to the same XSP. We mandate this configuration because the client's XSI-event heartbeats must go to the same XSP that is used to establish the event channel.

In this example, the SRV points to mutiple A records with each A record pointing to a different load balancer at a different site. The Webex App will always use the first IP address in the list and will only move to the next record if the first is down.

During the login process, the Webex App will also retrieve the DMS URL to download its config file. The host in the URL will parsed and the Webex App will perform DNS A/AAAA lookup of the host to connect to the XSP that hosts the DMS service.

The client attempts to locate the XSP nodes using the following DNS flow:

During login, the Webex App performs a DNS SRV lookup for _xsi-client._tcp.<xsi domain>, builds a list of hosts, and connects to one of the hosts based on the SRV priority, then weight. This connected host becomes the selected one for all future requests. An event channel is then opened to the selected host and a heartbeat is sent regularly to verify the channel. All requests sent after the first one include a cookie that is returned in the HTTP response, therefore, it’s important that the load balancer keeps session persistence (affinity) and always sends requests to the same backend XSP server.

If a request or a heartbeat request to a host fails, several things can happen:

When a new host is tried successfully, it becomes the new selected host if the host is present in the list. After the last host in the list is tried, the Webex App will rollover to the first one.

In the case of heartbeat, if there are two consecutive request failures, the Webex App will re-initialize the event channel.

Note that the Webex App does not perform fail-back, and DNS service discovery is performed only once at sign-in.

During sign-in, the Webex App tries to download the config file through the XSP/Dms interface. It performs a A/AAAA record lookup of the host in the retrieved DMS URL and connects to the first IP. It will first try to send the request to download the config file using a SSO token. If this fails for any reason, it will try again but with the device username and password.