This chapter describes how to use Cisco VQE Client Configuration Delivery Server (VCDS) Application Monitoring Tool (AMT). The VCDS is a software component installed on each VQE Tools server, the Cisco CDE that also hosts VCPT. The VCDS AMT is a web browser-based tool for displaying configuration, status, and statistics on the VCDS process and the VQE Tools server. The tasks that you can perform with the VCDS AMT are listed in Table 5-1 .

Note VCDS AMT supports configuration capabilities for logging levels and debugging options. However, the configured values do not persist when VCDS is restarted.

Logging into and Navigating in VCDS AMT

Before logging into VCDS AMT, you need a valid Linux username and password on the Cisco CDE hosting the VCDS AMT. The username does not have to belong to any special group. Creation of the username is the responsibility of the Cisco CDE system administrator.

If the username and password are valid, the VCDS AMT Status window is displayed.

The parent node ( System) in the tree provides summary data.

Each child node in the tree (such as VCDS) provides data on the specific child node.

Monitoring the Health of the VCDS Process and VQE Tools Server

When you click the System node in the navigation tree and the VCDS Status tab, the VCDS AMT displays VCDS and VQE Tools Server status information (Figure 5-2).

From the VCDS Status tab, you can view the following status information:

UNKNOWN if the hardware platform cannot be determined

VCDS Stopped—VCDS is not running

In addition to the VCDS Status tab, you can get information on the VCDS and the VQE Tools server on the five other tabs. Table 5-2 lists the information that is available from each tab accessible from the System node. The Configuration window has the information listed in Table 5-3 .

When you click the Statistics tab, the VCDS AMT displays the VCDS Statistics window (Figure 5-4).

The VCDS Statistics window has the information listed in Table 5-4 .

To change a VCDS logging priority level, click the button next to the level you want and click Apply . 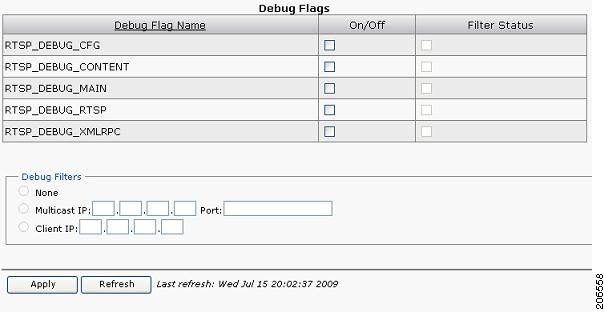 The debug flags for VCDS are displayed.

The selected debugging options are enabled.

Note The selected debugging options do not persist when the VCDS service is stopped. When the VCDS restarts, debugging goes back to the default—no options are enabled. Debug filters are always disabled.