Register the devices to the Internet Streaming CDSM and define the network topology and device groups.

Configure the delivery services that deliver content to the clients.

In order to achieve the best throughput, we recommend you configure a port channel for the four Gigabit Ethernet ports on the line card. For more information, see the "Configuring Port Channel" section on page E-1.

The CDS does not support network address translation (NAT) configuration, where one or more CDEs are behind the NAT device or firewall. The workaround for this, if your CDS network is behind a firewall, is to configure each internal and external IP address pair with the same IP address.

Adding all newly activated devices to a device group

Forcing device group settings onto all devices assigned to a group

From the Device Assignment page

From the Device Group Assignment page

From the Device home page.

From the Device Assignment page.

From the Device Group Assignment page.

While the tree is global, the delivery service routing process is actually a per-SE local function that answers the question "who is my forwarder for this delivery service?"

A receiver SE finds its forwarder by examining the series of locations on the topology "toward" the root location, following the parent-child relationship as described in the "Cisco CDS Topology" section.

This process follows the search path provided by the overall topology that was configured for the CDS. Using the combination of the overall topology configuration and the assignment of SEs to delivery services, the CDS gives the administrator a lot of control over the form of the distribution tree, and yet still automates most of the selection and failover process.

Specifying the content by using an externally hosted Manifest file.

Specifying the content by using the Internet Streaming CDSM.

Links have been followed to a specified depth.

Maximum number of objects has been acquired.

In this manner, the Content Acquirer "crawls" through the origin server.

The crawler cannot parse JavaScript or VBScript to get the links, nor does it work with HTTP cookies.

With SMB, files greater than two gigabytes cannot be ingested.

If the content to be ingested is specified in an <item> tag in the Manifest file, the Content Acquirer ignores the no-cache directive and fetches the content anyway.

If the content to be acquired is specified in a <crawler> tag in the Manifest file, the Content Acquirer honors the directive and does not fetch the content.

In some instances, for example when there are contractual obligations to prevent clients from downloading content, it may be necessary to disable HTTP downloads on a delivery service. When HTTP download is disabled, the Web Engine returns a 403 forbidden message. For configuration information, see the "Creating Delivery Service" section on page 5-3. 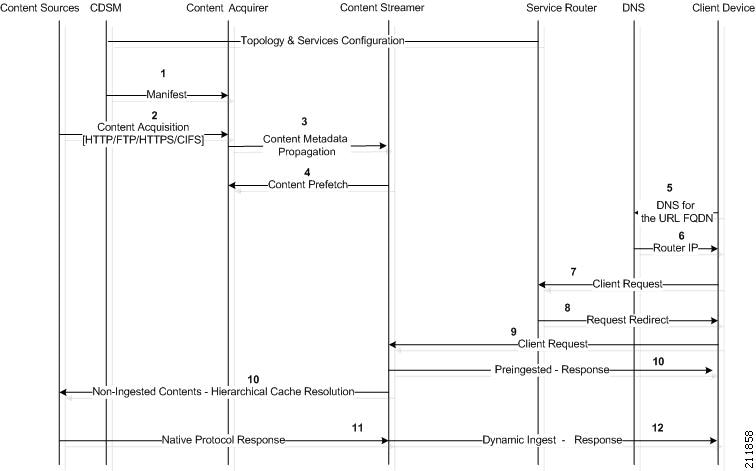 The request for content is specified in the Manifest file as "cache."

For more information, see the Cisco Internet Streamer CDS 2.4 API Guide, Appendix A, "Program Files in the CDS Software," at the following URL: