mVPN is an alternative to full-mesh point-to-point GRE tunnels, which is not a readily scalable solution and are limited in the granularity they provide to customers.

mVPN adds multicast routing information to the VPN routing and forwarding table. When a provider-edge (PE) router receives multicast data or control packets from a customer-edge (CE) router, forwarding is performed according to the information in the multicast VRF (mVRF).

Each mVRF maintains the routing and forwarding information that is needed for its particular VRF instance. An mVRF is created and configured in the same way as existing VRFs, except multicast routing is also enabled on each mVRF.

The mVPN feature establishes at least one multicast distribution tree (MDT) for each multicast domain. The MDT provides the information needed to interconnect the same mVRFs that exist on the different PE routers.

To create data MDTs, each PE router that is forwarding multicast streams to the backbone periodically examines the traffic being sent in each default MDT as follows:

Each PE router periodically samples the multicast traffic (approximately every 10 seconds for software switching, and 90 seconds for hardware switching) to determine whether a multicast stream has exceeded the configured threshold. (Depending on when the stream is sampled, this means that in a worst-case scenario, it could take up to 180 seconds before a high-bandwidth stream is detected.)

Data MDTs are created only for (S, G) multicast route entries within the VRF multicast routing table. They are not created for (*, G) entries.

The sending PE router then transmits a DATA-MDT JOIN request (which is a User Datagram Protocol (UDP) message to port 3232) to the other PE routers, informing them of the new data MDT.

Receiving PE routers examine their VRF routing tables to determine if they have any customers interested in receiving this data stream. If so, they use the PIM protocol to transmit a PIM JOIN message for this particular data MDT group (in the global table PIM instance) to accept the stream. Routers that do not currently have any customers for this stream still cache the information, in case any customers request it later on.

Three seconds after sending the DATA-MDT JOIN message, the sending PE router removes the high-bandwidth multicast stream from the default MDT and begins transmitting it over the new data MDT.

The sending PE router continues to send a DATA-MDT JOIN message every 60 seconds, as long as the multicast stream continues to exceed the defined threshold. If the stream falls below the threshold for more than 60 seconds, the sending PE router stops sending the DATA-MDT JOIN messages, and moves the stream back to the default MDT.

Receiving routers age out the cache information for the default MDT when they do not receive a DATA-MDT JOIN message for more than three minutes.

Data MDTs allow for high-bandwidth sources inside the VPN while still ensuring optimal traffic forwarding in the MPLS VPN core.

In the following example, a service provider has a multicast customer with offices in San Jose, New York, and Dallas. The San Jose site is transmitting a one-way multicast presentation. The service provider network supports all three sites associated with this customer, in addition to the Houston site of a different enterprise customer.

The default MDT for the enterprise customer consists of provider routers P1, P2, and P3 and their associated PE routers. Although PE4 is interconnected to these other routers in the MPLS core, PE4 is associated with a different customer and is therefore not part of the default MDT. 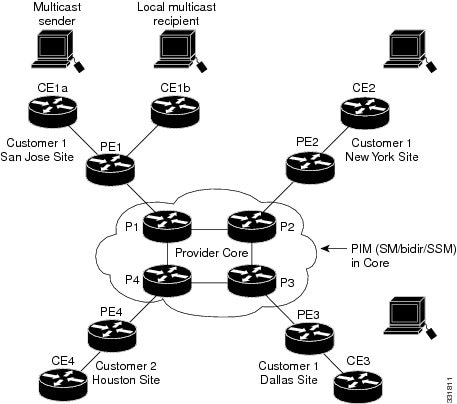 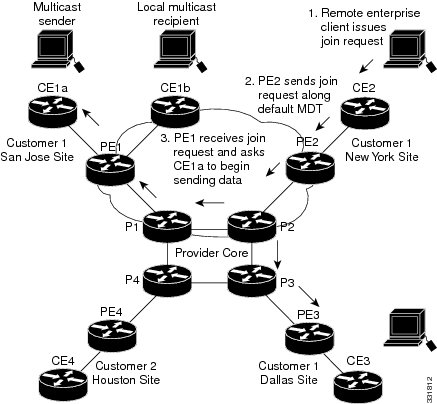 The CE router (CE1a) starts sending the multicast data to the associated PE router (PE1), which recognizes that the multicast data exceeds the bandwidth threshold at which a data MDT should be created. PE1 then creates a data MDT and sends a message to all routers using the default MDT that contains information about the data MDT.

Approximately three seconds later, PE1 begins sending the multicast data for that particular stream using the data MDT. Because only PE2 has receivers who are interested in this source, only PE2 joins the data MDT and receives traffic on it.

On the router, the MTI is a tunnel interface (created with the interface tunnel command) with a class D multicast address. All PE routers that are configured with a default MDT for this mVRF create a logical network in which each PE router appears as a PIM neighbor (one hop away) to every other PE router in the multicast domain, regardless of the actual physical distance between them.

The MTI is automatically created when an mVRF is configured. The BGP peering address is assigned as the MTI interface source address, and the PIM protocol is automatically enabled on each MTI.

When the router receives a multicast packet from the customer side of the network, it uses the incoming interface’s VRF to determine which mVRFs should receive it. The router then encapsulates the packet using GRE encapsulation. When the router encapsulates the packet, it sets the source address to that of the BGP peering interface and sets the destination address to the multicast address of the default MDT, or to the source address of the data MDT if configured. The router then replicates the packet as needed for forwarding on the appropriate number of MTI interfaces.

When the router receives a packet on the MTI interface, it uses the destination address to identify the appropriate default MDT or data MDT, which in turn identifies the appropriate mVRF. It then decapsulates the packet and forwards it out the appropriate interfaces, replicating it as many times as are necessary.

Unlike other tunnel interfaces that are commonly used on Cisco routers, the mVPN MTI is classified as a LAN interface, not a point-to-point interface. The MTI interface is not configurable, but you can use the show interface tunnel command to display its status.

Each PE router that supports the mVPN feature uses the following routing tables to ensure that the VPN and mVPN traffic is routed correctly:

mVPN supports multicast distributed switching (MDS) for multicast support on a per-interface and a per-VRF basis. When configuring MDS, you must make sure that no interface (including loopback interfaces) has the no ip mroute-cache command configured.

To configure a VRF entry, perform this task:

This example show how to configure a VRF named blue and verify the configuration:

To configure the route distinguisher, perform this task:

This example show how to configure 55:1111 as the route distinguisher and verify the configuration:

To configure the route-target extended community, perform this task:

When configuring the route-target extended community, note the following information:

This example shows how to configure 55:1111 as the import and export route-target extended community and verify the configuration:

Connected addresses are not in global routing table

CSC is not configured.

To configure the default MDT, perform this task:

When configuring the default MDT, note the following information:

This example shows how to configure a data MDT:

This example shows how to enable data MDT logging:

The following excerpt from a configuration file shows typical VRF configurations for a range of VRFs. To simplify the display, only the starting and ending VRFs are shown.

To display all of the VRFs that are configured on the switch, use the show ip vrf command:

To display information about the MDTs that are currently configured for all mVRFs, use the show ip pim mdt command. The following example shows typical output for this command:

To display routing information for a particular VRF, use the show ip route vrf command:

To display information about the multicast routing table and tunnel interface for a particular mVRF, use the show ip mroute vrf command. The following example shows typical output for a mVRF named BIDIR01:

In this example, the show ip mroute vrf command shows that Tunnel1 is the MDT tunnel interface (MTI) being used by this VRF.

This example show how to enable IPv4 multicast routing globally:

This example show how to enable IPv4 multicast VRF routing:

This example show how to specify the PIM VRF RP address:

This example show how to configure a PIM VRF register message source address:

When configuring an MSDP peer, note the following information:

This example show how to configure an MSDP peer:

To configure the maximum number of multicast routes, perform this task:

When configuring the maximum number of routes, note the following information:

This example show how to configure the maximum number of multicast routes:

This example show how to configure IPV4 multicast route filtering:

The following excerpt from a configuration file shows the minimum configuration that is needed to support multicast routing for a range of VRFs. To simplify the display, only the starting and ending VRFs are shown.

To display the known PIM neighbors for a particular mVRF, use the show ip pim vrf neighbor command:

Protocol Independent Multicast (PIM) must be configured on all interfaces that are being used for IPv4 multicast traffic. In a VPN multicast environment, you should enable PIM on at least all of the following interfaces:

In addition, you must also associate mVRFs with those interfaces over which they are going to forward multicast traffic.

Configuring PIM on an Interface

To configure PIM on an interface, perform this task:

When configuring PIM on an interface, note the following information:

A physical interface on a provider edge (PE) router that is connected to the backbone.

A loopback interface that is used for BGP peering.

A loopback interface that is used as the source for the sparse PIM network rendezvous point (RP) address.

This example shows how to configure PIM sparse mode on a physical interface:

This example shows how to configure PIM sparse mode on a loopback interface:

To configure an interface for IPv4 VRF forwarding, perform this task:

This example shows how to configure the interface for VRF blue forwarding:

mVPN Configuration with Default MDTs Only