This chapter describes the Catalyst 4948 switch, as well as system features and components.

The Catalyst 4948 switch (see Figure 1-1) is designed for high-performance, high-density edge switching applications. It is a fixed configuration switching solution delivering 10/100/1000 connectivity on all ports, supporting hot swappable, redundant power supplies in a compact one rack-unit size for applications where space is at a premium.

The Catalyst 4948 switch has a 96-Gbps, nonblocking, full-duplex switching fabric, providing 72 million packets-per-second of switching capacity for high-speed applications. The Catalyst 4948 chassis has 44 10BASE-T/100BASE-TX/1000BASE-T Ethernet ports and four ports that can be either 1000BASE-X SFP ports or 10BASE-T/100BASE-TX/1000BASE-T Ethernet ports.

The following is an overview of Catalyst 4948 features:

Compatible development of new features with the Catalyst 4500 series switches

Support for the first four RMON groups (Ethernet Statistics, Alarms, Events, and History) on a per-port basis without the need for an optional RMON processing module

The Catalyst 4948 switch is a high-performance dedicated Ethernet switch that fully integrates into the Catalyst family of switches using Catalyst 4500 series system software.

The following is an overview of the Catalyst 4948 hardware features:

There are 48 10/100/1000BASE-T Ethernet ports using RJ-45 interfaces and four 1000BASE-X Ethernet ports using SFP interfaces. These SFP ports share MAC addresses with the last four 10/100/1000BASE-T ports. The interface configuration mode command media-type sfp | rj45 command can be used to configure the media type for these ports in the switch software and determines whether the SFP connector or the RJ-45 connector is used. The default is SFP.

A console serial port (RJ-45) provides for switch management using standard console equipment. (See Figure 1-2.) A connector pinout table is provided in Appendix A, “Specifications,” for the console and management ports. Use this port when performing Cisco IOS configuration tasks from a console.

The Management port on the front panel is only operational when the switch is in rommon mode. When in use, it offers the same TCP/IP based management services available via inband access ( telnet SNMP etc). IP address configuration via BOOTP is supported on the Management port; it also supports image download to the switch. 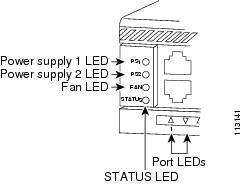 A console cable is not provided in the accessory kit. It can be ordered as an option.

The LEDs on the front panel of the Catalyst 4948 switch (see Figure 1-2 and Figure 1-3) provide status information as follows:

A description of the LED functions is provided in Table 1-1 .

The hot-swappable system fan tray provides cooling air for the internal chassis components. The fans exhaust air to the rear, and fresh air is drawn in from the sides of the chassis.

When the fan tray is removed, internal circuitry is exposed that should not be touched by tools or fingers. The system should not be left operating without a fan tray for longer than is necessary to replace a faulty fan tray with a new one.

Figure 1-4 shows the direction of airflow going in and out of the switch.

There are four fans in the fan tray. If an individual fan fails, the other fans continue to run. Sensors monitor the internal air temperatures. The number of fans in operation and their speed varies according to the internal temperature for the quietest operation possible. If the air temperature exceeds a desired threshold, the environmental monitor displays warning messages.

The switch will start with only one power supply plugged in, but redundant failover and load sharing will not be available in this configuration. We recommend that you always connect both power supplies to separate AC or DC circuits for optimal power reliability.

For safety reasons, the AC power supply needs to be switched off and unplugged before it is removed from a chassis or inserted into a chassis. DC supplies should have power shut off from the source before they are removed.

If only one power supply will be used, you must use the blank faceplate supplied to cover the empty power bay.

Environmental Monitoring of the Power Supplies

Using the environmental monitoring and reporting functions, you can maintain normal system operation by resolving adverse environmental conditions prior to loss of operation.

Each power supply monitors its own temperature and output voltages. If conditions reach critical thresholds, the power supply might shut down to avoid damage from excessive heat or electrical current. The Catalyst 4948 switch senses the operating condition of the power supply and reports status through software.

Power Management for the Catalyst 4948 Switch

You can select from AC or DC power supplies to power your switch. The Catalyst 4948 switch supports the following power supplies:

A redundant power supply can be identified and diagnosed by a running system regardless of its input status. AC and DC supplies are interchangeable.