This chapter describes how to use Resilient Ethernet Protocol (REP) on the Catalyst 4500 series switch. REP is a Cisco proprietary protocol that provides an alternative to Spanning Tree Protocol (STP) to control network loops, handle link failures, and improve convergence time. REP controls a group of ports connected in a segment, ensures that the segment does not create any bridging loops, and responds to link failures within the segment. REP provides a basis for constructing more complex networks and supports VLAN load balancing.

One REP segment is a chain of ports connected to each other and configured with a segment ID. Each segment consists of standard (non-edge) segment ports and two user-configured edge ports. A switch can have no more than two ports that belong to the same segment, and each segment port can have only one external neighbor. A segment can go through a shared medium, but on any link only two ports can belong to the same segment. REP is supported only on Layer 2 trunk and PVLAN promiscuous trunk interfaces.

Figure 1-1 shows an example of a segment consisting of six ports spread across four switches. Ports E1 and E2 are configured as edge ports. When all ports are operational (as in the segment on the left), a single port is blocked, shown by the diagonal line. When there is a failure in the network, as shown in the diagram on the right, the blocked port returns to the forwarding state to minimize network disruption.

The segment shown in Figure 1-1 is an open segment; there is no connectivity between the two edge ports. The REP segment cannot cause a bridging loop and it is safe to connect the segment edges to any network. All hosts connected to switches inside the segment have two possible connections to the rest of the network through the edge ports, but only one connection is accessible at any time. If a failure causes a host to be unable to access its usual gateway, REP unblocks all ports to ensure that connectivity is available through the other gateway. 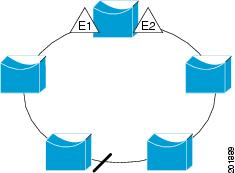 You can construct almost any type of network based on REP segments. REP also supports VLAN load balancing, controlled by the primary edge port but occurring at any port in the segment.

In access ring topologies, the neighboring switch might not support REP, as shown in Figure 1-3. Starting with Cisco IOS Release 15.0(2)SG, you can configure the non-REP facing ports (E1 and E2) as edge no-neighbor ports. These ports inherit all properties of edge ports, and you can configure them the same as any edge port, including configuring them to send STP or REP topology change notices to the aggregation switch. In this case the STP topology change notice (TCN) that is sent is a multiple spanning-tree (MST) STP message. 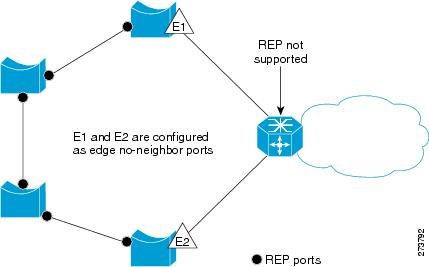 To use REP effectively, you should understand the following topics:

REP does not use an end-to-end polling mechanism between edge ports to verify link integrity. It implements local link failure detection. When enabled on an interface, the REP Link Status Layer (LSL) detects its REP-aware neighbor and establishes connectivity within the segment. All VLANs are blocked on an interface until it detects the neighbor. After the neighbor is identified, REP determines which neighbor port should become the alternate port and which ports should forward traffic.

Each port in a segment has a unique port ID. The port ID format is similar to that used by the spanning tree algorithm: a port number (unique on the bridge), associated to a MAC address (unique in the network). When a segment port is coming up, its LSL starts sending packets that include the segment ID and the port ID. The port is declared as operational after it performs a three-way handshake with a neighbor in the same segment. A segment port does not become operational if these situations occur:

Each port creates an adjacency with its immediate neighbor. Once the neighbor adjacencies are created, the ports negotiate to determine one blocked port for the segment, the alternate port. All other ports become unblocked. By default, REP packets are sent to a BPDU class MAC address. The packets can also be sent to the Cisco multicast address, which at present is used only to send blocked port advertisement (BPA) messages when there is a failure in the segment. The packets are dropped by devices not running REP.

Because REP runs on a physical link basis and not a per-VLAN basis, only one hello message is required for all VLANs, reducing the load on the protocol. We recommend that you create VLANs consistently on all switches in a given segment and configure the same allowed VLANs on the REP trunk and PVLAN promiscuous trunk ports. To avoid the delay introduced by relaying messages in software, REP also allows some packets to be flooded to a regular multicast address. These messages operate at the hardware flood layer (HFL) and are flooded to the whole network, not just the REP segment. Switches that do not belong to the segment treat them as data traffic. You can control flooding of these messages by configuring a dedicated administrative VLAN for the whole domain.

The estimated convergence recovery time is less than 200 milliseconds for the local segment.

To identify the port ID of a port in the segment, enter the show interface rep detail interface configuration command for the port.

When the REP segment is complete, all VLANs are blocked. When you configure VLAN load balancing, it is triggered in one of two ways:

REP does not interact with STP, but can coexist with it. A port that belongs to a segment is removed from spanning tree control and STP BPDUs are not accepted or sent from segment ports. STP can not run on a segment.

Ports in REP segments take one of three roles or states: Failed, Open, or Alternate.

A segment port that is reconfigured as a spanning tree port restarts according the spanning tree configuration (by default, a designated blocking port). If PortFast is configured or if STP is disabled, the port goes into the forwarding state.

This section includes this information:

If REP is enabled on two ports on a switch, both ports must be either regular segment ports or edge ports.

To configure the REP administrative VLAN, perform this task:

To enable and configure REP on an interface, perform this task:

This example shows how to configure an interface as the primary edge port for segment 1, to send STCNs to segments 2 through 5, and to configure the alternate port as the port with port ID 0009001818D68700 to block all VLANs after a preemption delay of 60 seconds after a segment port failure and recovery.

This example shows how to configure the VLAN blocking configuration shown in Figure 1-5. The alternate port is the neighbor with neighbor offset number 4. After manual preemption, VLANs 100 to 200 are blocked at this port and all other VLANs are blocked at the primary edge port E1 (Gigabit Ethernet port 1/1).

If you do not enter the rep preempt delay seconds interface configuration command on the primary edge port to configure a preemption time delay, the default is to manually trigger VLAN load balancing on the segment. Be sure that all other segment configuration has been completed before manually preempting VLAN load balancing. When you enter the rep preempt segment command, a confirmation message appears before the command is executed because preemption can cause network disruption.

To manually trigger VLAN load balancing on a segment on the switch that has the segment primary edge port, perform this task:

To configure the switch to send REP-specific traps to notify the SNMP server of link operational status changes and port role changes, perform this task: