This chapter describes how to use Hot Standby Router Protocol (HSRP) on the Catalyst 3560 switch to provide routing redundancy for routing IP traffic without being dependent on the availability of any single router. You can also use a version of HSRP in Layer 2 mode to configure a redundant command switch to take over cluster management if the cluster command switch fails. For more information about clustering, see "Clustering Switches."

For complete syntax and usage information for the commands used in this chapter, refer to the switch command reference for this release and the Cisco IOS IP and IP Routing Command Reference for Release 12.1. 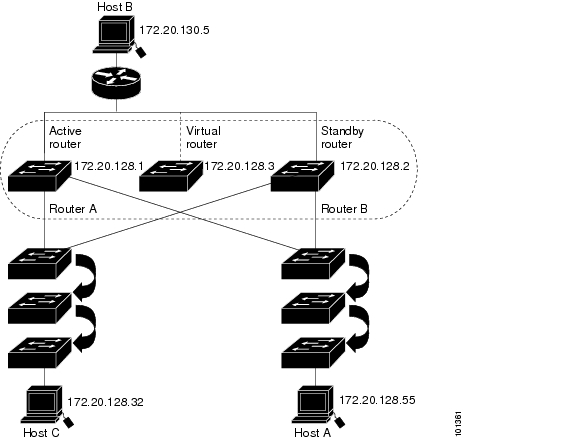 These sections include HSRP configuration information:

In the following procedures, the specified interface must be one of these Layer 3 interfaces:

All Layer 3 interfaces must have IP addresses assigned to them. See the "Configuring Layer 3 Interfaces" section.

This procedure is the minimum number of steps required to enable HSRP.

Although HSRP can run with no other configuration required, you can configure attributes for the HSRP group, including authentication, priority, preemption and preemption delay, timers, or MAC address.

The standby priority, standby preempt, and standby track interface configuration commands are all used to set characteristics for determining active and standby routers and behavior regarding when a new active router takes over. When configuring priority, follow these guidelines: