This chapter describes how to configure the Web Cache Communication Protocol version 2 (WCCPv2) on the Cisco NX-OS device.

By allowing a cache cluster to connect to multiple routers, WCCPv2 provides redundancy and a distributed architecture for instances when a cache engine must connect to many interfaces. In addition, WCCPv2 allows you to keep all the cache engines in a single cluster, which avoids the unnecessary duplication of web pages across several clusters. 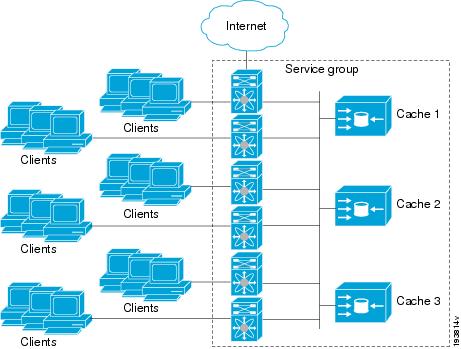 You configure each cache engine with a list of routers.

Each cache engine announces its presence and generates a list of all routers with which it has established communications.

The routers reply with their view (list) of cache engines in the group. 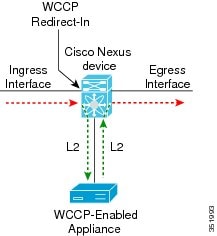 The set of translations for the permit and deny rules are given below:

You can configure an Access Control List (ACL), called a redirect list for a WCCPv2 service group. If the ACL is configured with deny ip any any, then traffic will be forwarded normally and not through WCCP.

A cache engine might return a packet for one of the following reasons:

WCCP redirection occurs within a VRF. You must configure the WCCP cache engine so that the forward and return traffic to and from the cache engine occurs from interfaces that are a part of the same VRF.

The VRF used for the WCCP on an interface should match the VRF configured on that interface.

If you change the VRF membership of an interface, Cisco Nexus 6000 Series switches remove all Layer 3 configurations, including WCCPv2.

The Service Policy Manager (SPM) supervisor component acts as a data path manager for the WCCP Manager. The WCCP manager is shielded from the underlying platform specifics by the SPM and is portable to platform variations. The WCCP manager has a set of SPM APIs to pass the configurations that are mapped and programmed in the hardware. These APIs can process and parse the application data that is implemented and maintained in one single handler.

The interface redirects that failed to be programmed by the SPM are stored until there is a service group configuration change through the CLI or an RA message. The WCCP manager retries programming policies that failed previously.

The WCCP manager sends policy updates to the SPM in intervals to program TCAM entries in the hardware. These policy updates can be triggered by the CLI or through RA (Redirect-Assign) messages. When the WCCP is notified of an SPM error, a syslog message appears.

WCCPv2 has the following configuration guidelines and limitations:

To disable the WCCPv2 feature in a VDC and remove all associated configuration, use the following command in global configuration mode:

You must configure the same authentication on all members of the WCCPv2 service group.

Closed mode for dynamic service groups requires a service list access control list (ACL) that specifies the protocol and port information that is used for the service group. If there are no members in the service group, packets that match the service-list ACL are dropped.

The service-list keyword ACL must have only protocol and port information. To restrict traffic that is considered for redirection, use the redirect-list keyword.

This example shows how to configure a router to redirect web-related packets without a destination of 19.20.2.1 to the web cache:

The WCCPv2 VRF must match the VRF configured on the interface.

This example shows how to configure WCCPv2 in VRF Red on interface Ethernet 2/1:

To display the WCCPv2 configuration, perform one of the following tasks: