The Cisco Nexus 1000V is a distributed virtual switch solution that is fully integrated within the VMware virtual infrastructure, including VMware vCenter, for the virtualization administrator. This solution offloads the configuration of the virtual switch and port groups to the network administrator to enforce a consistent data center network policy.

You can install the VSM in either a standalone or active/standby high-availability (HA) pair. We recommend that you install two VSMs in an active-standby configuration for high availability.

The VSM, along with the VEMs that it controls, performs the following functions for the Cisco Nexus 1000V system:

The VSM uses an external network fabric to communicate with the VEMs. The VSM runs the control plane protocols and configures the state of each VEM, but it never actually forwards packets. The physical NICs on the VEM server are the uplinks to the external fabric. VEMs switch traffic between the local virtual Ethernet ports that are connected to the VM vNICs but do not switch the traffic to other VEMs. Instead, a source VEM switches packets to the uplinks that the external fabric delivers to the target VEM.

A single VSM can control up to 256 VEMs. Assuming that you have the 256 VEMs and the redundant VSMs, the Cisco Nexus 1000V can be viewed as a 66-slot modular switch.

The Cisco Nexus 1000V architecture is shown in this figure. 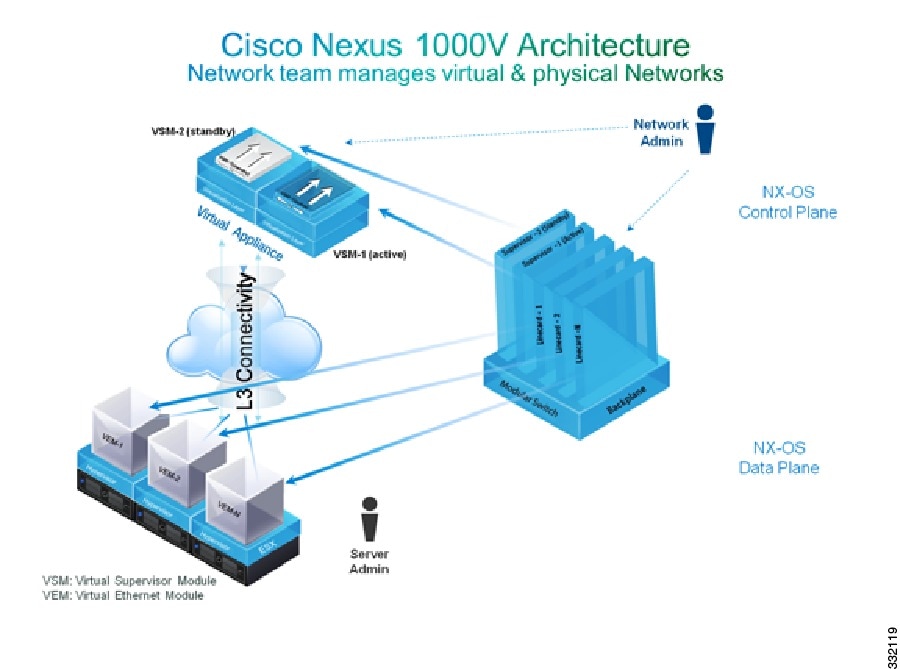 Each hypervisor is embedded with one VEM which replaces the virtual switch by performing the following functions:

In the Cisco Nexus 1000V, the traffic is switched between VMs locally at each VEM instance. Each VEM also interconnects the local VM with the rest of the network through the upstream access-layer network switch (blade, top-of-rack, end-of-row, and so forth). The VSM runs the control plane protocols and configures the state of each VEM accordingly, but it never forwards packets.

In the Cisco Nexus 1000V, the module slots are for the primary module 1 and secondary module 2. Either module can act as active or standby. The first server or host is automatically assigned to module 3. The network interface card (NIC) ports are 3/1 and 3/2 (vmnic0 and vmnic1 on the ESXi host). The ports to which the virtual NIC interfaces connect are virtual ports on the Cisco Nexus 1000V where they are assigned with a global number.

The VSM and the VEM can communicate over a Layer 2 network or a Layer 3 network. These configurations are referred to as Layer 2 or Layer 3 control modes.

Each VEM needs a designated VMkernel NIC interface that is attached to the VEM that communicates with the VSM. This interface, which is called the Layer 3 Control vmknic, must have a system port profile applied to it (see System Port Profiles and System VLANs), so the VEM can enable it before contacting the VSM.

Figure 2. VSM and VEM on the Same Host in Layer 2 Control Mode 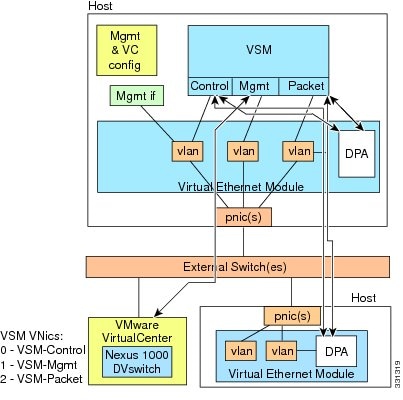 System port profiles can establish and protect ports and VLANs that need to be configured before the VEM contacts the VSM.

When a server administrator adds a host to a DVS, its VEM must be able to contact the VSM. Because the ports and VLANs used for this communication are not yet in place, the VSM sends a minimal configuration, including the system port profiles and system VLANs, to vCenter Server, which then propagates it to the VEM.

After a system port profile has been applied to one or more ports, you can add more system VLANs, but you can only delete a system VLAN after you remove the port profile from service. This action prevents you from accidentally deleting a critical VLAN, such as a host management VLAN or a VSM storage VLAN.

Cisco Virtual Switch Update Manager is the graphical user interface (GUI) that you use to install the VSMs in high availability (HA) or standalone mode and the VEMs on ESXi hosts. The Cisco Virtual Switch Update Manager graphical user interface (GUI) is an integral part of VMware vSphere Web Client and it can only be accessed by logging into VMware vSphere Web Client.

When you install the Cisco Nexus 1000V manually, you download and install all of the necessary software. This installation method gives you the option of deploying Layer 2 or Layer 3 connectivity between the VSM and VEMs. Layer 3 connectivity is the preferred method. For an example of the Layer 3 installation topology, see Topology for Layer 3 Control Mode. If you want to use Layer 2 connectivity, see Topology for Layer 2 Control Mode. 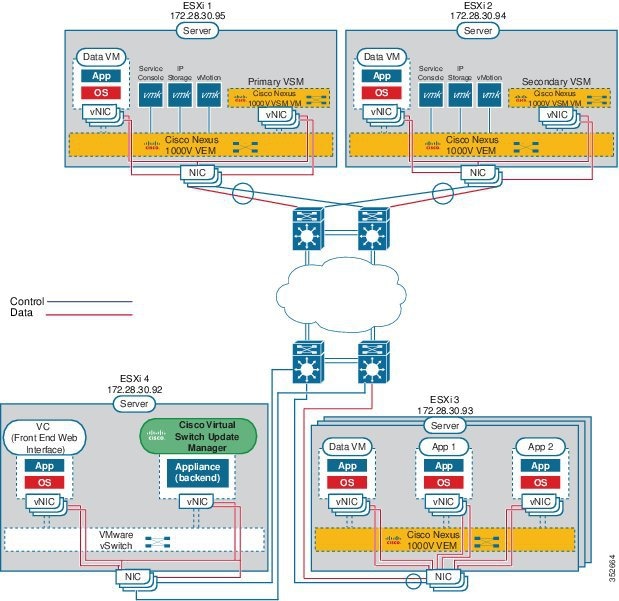 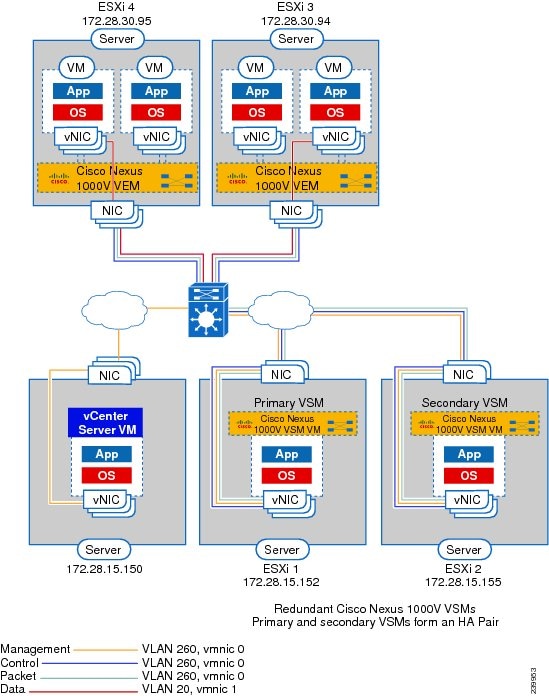 You can deploy the control and management interfaces on separate VLANs or on the same VLAN.