Dynamic ARP Inspection (DAI) ensures that only valid ARP requests and responses are relayed by intercepting all ARP requests and responses on untrusted ports and verifying that each of these intercepted packets has a valid IP-to-MAC address binding before updating the local ARP cache or before forwarding the packet to the appropriate destination. When this feature is enabled, invalid ARP packets are dropped.

ARP provides IP communication within a Layer 2 broadcast domain by mapping an IP address to a MAC address. For example, host B wants to send information to host A but does not have the MAC address of host A in its ARP cache. In ARP terms, host B is the sender and host A is the target.

In an ARP spoofing attack, a host allows an unsolicited ARP response to update its cache so that traffic is directed through the attacker until it is discovered and the information in the ARP cache is corrected.

In the figure, hosts A, B, and C are connected to the device on interfaces A, B, and C, all of which are on the same subnet. Their IP and MAC addresses are shown in parentheses. For example, host A uses IP address IA and MAC address MA.

When host A needs to send IP data to host B, it broadcasts an ARP request for the MAC address associated with IP address IB. When the device and host B receive the ARP request, they add a binding to their ARP caches for a host with the IP address IA and a MAC address MA.

When host B responds, the device and host A update their ARP caches with a binding for a host with the IP address IB and the MAC address MB.

Host C can spoof host A and B by broadcasting the following forged ARP responses:

Because host C knows the true MAC addresses associated with IA and IB, it can forward the intercepted traffic to those hosts by using the correct MAC address as the destination. This topology, in which host C has inserted itself into the traffic stream from host A to host B, is an example of a man-in-the middle attack.

DAI is used to validate ARP requests and responses as follows:

DAI can determine the validity of an ARP packet based on valid IP-to-MAC address bindings stored in a Dynamic Host Configuration Protocol (DHCP) snooping binding database. This database is built by DHCP snooping when it is enabled on the VLANs and on the device. It may also contain static entries that you have created.

In a typical network, interfaces are configured as follows:

With this configuration, all ARP packets that enter the network from a device bypass the security check. No other validation is needed at any other place in the VLAN or in the network.

Figure 2. ARP Packet Validation on a VLAN Enabled for DAI

If you configure interfaces as trusted when they should be untrusted, you might open a security hole in a network. If device A is not running DAI, host 1 can easily poison the ARP cache of device B (and host 2, if you configured the link between the devices as trusted). This condition can occur even though device B is running DAI.

Guidelines and Limitations for DAI

Configuring a VLAN for DAI

By default, VLANs are not configured for DAI.

This example shows how to configure a VLAN for DAI:

Before beginning this procedure, you must know the following information:

Before beginning this procedure, you must be logged in to the CLI in EXEC mode

This example shows how to configure a trusted vEthernet interface:

Resetting a vEthernet Interface to Untrusted

This example shows how to reset a vEthernet interface to a untrusted state:

You can set the rate limit of ARP requests and responses.

Because of their aggregation, trunk ports should be configured with higher rate limits.

Once the rate of incoming packets exceeds the configured rate, the interface is automatically put into an errdisable state.

The default DAI rate limits are as follows:

You can configure the rate limits for an interface on either of the following:

This example shows how to create DAI rate limits:

Use this procedure to set the rate limit of ARP requests and responses.

Before beginning this procedure, you must know the following:

This example shows how to reset DAI rate limits to their default values:

By default, interfaces are not configured for DAI error-disabled recovery.

To manually recover an interface from the error-disabled state, use the following command sequence.

This example shows how to detect and recover error-disabled interfaces:

You can enable validation of the following, which are disabled by default:

This example shows how to validate ARP packets:

Use the following commands to monitor DAI:

This example shows how to display IP ARP statistics:

These examples show how to configure DAI in a network with two VEMs:

Figure 3. Configuring DAI in a Network 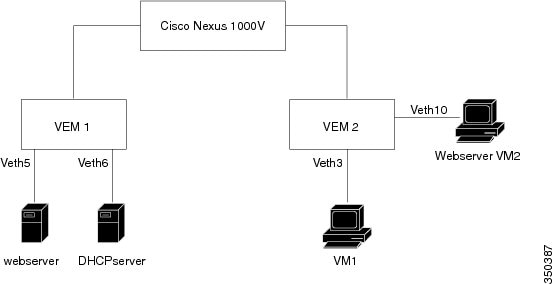 Without DAI enabled, VM 2 can spoof the ARP cache in VM 1 by sending a packet even though an ARP request was not generated. In this case, the packet directs VM 1 to send its traffic to the VM 2 web server instead of the authentic web server.

Enabling DAI on VLAN 1 and Verifying the Configuration

This example shows how to enable DAI on VLAN 1 and add a static binding for the web server on interface veth5:

Dropping an ARP Request Packet and Logging the Error Message

If VM 2 tries to send an ARP request with an IP address of 10.0.0.3, the packet is dropped and an error message is logged.

Example of Displaying the Statistics for DAI

This table only includes updates for those releases that have resulted in additions to the feature.