To authenticate through VFC ports, FC-SP peers use the port VSAN for communication. Hence, the port VSAN needs to be the same and active on both the peers to send and receive authentication messages.

All switches in the Cisco MDS 9000 Family enable fabric-wide authentication from one switch to another switch, or from a switch to a host. These switch and host authentications are performed locally or remotely in each fabric. As storage islands are consolidated and migrated to enterprise-wide fabrics new security challenges arise. The approach of securing storage islands cannot always be guaranteed in enterprise-wide fabrics.

For example, in a campus environment with geographically distributed switches someone could maliciously interconnect incompatible switches or you could accidentally do so, resulting in Inter-Switch Link (ISL) isolation and link disruption. This need for physical security is addressed by switches in the Cisco MDS 9000 Family (see Figure xiii-1). 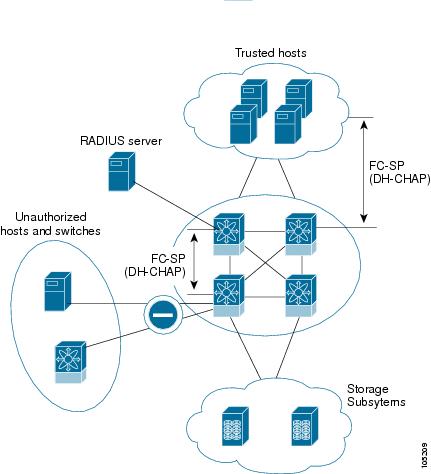 DHCHAP is an authentication protocol that authenticates the devices connecting to a switch. Fibre Channel authentication allows only trusted devices to be added to a fabric, which prevents unauthorized devices from accessing the switch.

The terms FC-SP and DHCHAP are used interchangeably in this chapter.

Configure the DHCHAP password for the local switch and other switches in the fabric.

This section identifies the impact of configuring the DHCHAP feature along with existing Cisco MDS features:

By default, the DHCHAP feature is disabled in all switches in the Cisco MDS 9000 Family.

You must explicitly enable the DHCHAP feature to access the configuration and verification commands for fabric authentication. When you disable this feature, all related configurations are automatically discarded.

To enable DHCHAP for a Cisco MDS switch, follow these steps:

The DHCHAP authentication status for each interface depends on the configured DHCHAP port mode.

When the DHCHAP feature is enabled in a switch, each Fibre Channel interface or FCIP interface may be configured to be in one of four DHCHAP port modes:

Whenever DHCHAP port mode is changed to a mode other than the Off mode, reauthentication is performed.

Changing DHCHAP port mode for a VE link requires a port flap on both the ends.

To configure the DHCHAP mode for a particular interface, follow these steps:

If you change the hash algorithm configuration, then change it globally for all switches in the fabric.

FC-SP supports multiple DHCHAP groups. The allowed groups may be changed from the default list. The list is configured in the order of highest to lowest priority to be used when negotiating with the FC-SP peer. Each side compares the list of groups received with the local group list and the highest priority group is used. Each group should be specified no more than once in the configuration command.

Refer to the fcsp dhchap command in the Cisco MDS 9000 Series NX-OS Command Reference Guide for details about the groups.

If you change the DH group configuration, change it globally for all switches in the fabric.

To change the DH group settings, follow these steps:

DHCHAP authentication in each direction requires a shared secret password between the connected devices. To do this, you can use one of three approaches to manage passwords for all switches in the fabric that participate in DHCHAP.

All passwords are restricted to 64 alphanumeric characters and can be changed, but not deleted.

We recommend using RADIUS or TACACS+ for fabrics with more than five switches. If you need to use a local password database, you can continue to do so using Approach 3 and using the Cisco MDS 9000 Family Fabric Manager to manage the password database.

You see the FC-SP configuration in the Information pane.

(Optional) Check the switches that you want to configure the same local password on.

Select the switch WNN and fill in the Password field.

You can configure passwords in the local authentication database for other devices in a fabric. The other devices are identified by their device name, which is also known as the switch WWN or device WWN. The password is restricted to 64 characters and can be specified in clear text (0) or in encrypted text (7).

The switch WWN identifies the physical switch. This WWN is used to authenticate the switch and is different from the VSAN node WWN.

During the DHCHAP protocol exchange, if the MDS switch does not receive the expected DHCHAP message within a specified time interval, authentication failure is assumed. The time ranges from 20 (no authentication is performed) to 1000 seconds. The default is 30 seconds.

When changing the timeout value, consider the following factors:

To configure the DHCHAP timeout value, follow these steps:

To configure the AAA authentication refer to the Chapterix, “Configuring Security Features on an External AAA Server” Follow these steps:

Use the show fcsp commands to display configurations for the local database (see Example xiii-1 through xiii-6 ).

Example xiii-6 Displays the ASCII Representation of the Device WWN

Use the ASCII representation of the device WWN (identified in bold in Example xiii-6) to configure the switch information on RADIUS and TACACS+ servers.

This section provides the steps to configure the example illustrated in Figure xiii-2.

To configure the authentication setup shown in Figure xiii-2, follow these steps:

Explicitly enable DHCHAP in this switch.

When you disable DHCHAP, all related configurations are automatically discarded.

Configure a clear text password for this switch. This password will be used by the connecting device.

Configures a password for another switch in the fabric that is identified by the switch WWN device name.

Enable the DHCHAP mode for the required Fibre Channel interface.

Whenever DHCHAP port mode is changed to a mode other than the Off mode, reauthentication is performed.

Verify the protocol security information configured in this switch by displaying the DHCHAP local password database.

Display the DHCHAP configuration in the Fibre Channel interface.

Repeat these steps on the connecting MDS 9509 Switch.

You have now enabled and configured DHCHAP authentication for the sample setup in Figure xiii-2.

Table xiii-2 lists the default settings for all fabric security features in any switch.