Figure 3-1 illustrates the core-edge topology where you are recommended to place the IOA interfaces (MSM-18/4 or SSN-16) in the core switches that interconnect the two sites. The ISLs interconnecting the two sites over a MAN or WAN are typically on the core switches as wel, so this becomes a natural place to deploy the IOA service. This deployment provides the following benefits:

Provides consolidation of IOA service at the core.

Allows easy scalability of the IOA service engines based on the desired throughput.

Facilitates planning the capacity based on WAN ISL throughput on the core switches themselves.

Provides optimal routing as the flows have to traverse these core switches to reach the remote sites. Figure 3-2 illustrates the edge-core-edge topology where you are recommended to place the MSM-18/4 Module or SSN-16 Module at the core switches that interconnect the two sites.

Figure 3-3 illustrates the collapsed core toplogy where you are recommended to place the MSM-18/4 Module or SSN-16 Module (IOA interfaces) in the core switches that interconnect the two sites. 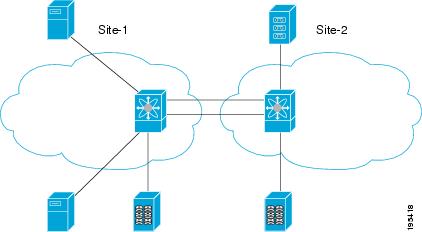 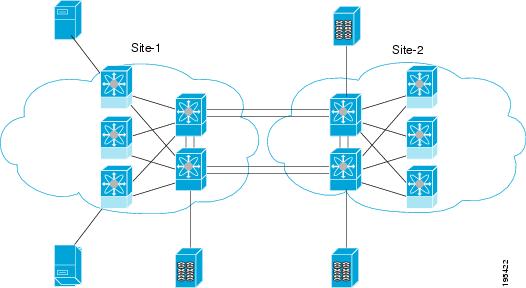 Figure 3-5 illustrates the IOA implementation where the IOA service is extended across multiple sites. In this example, Site-4 consolidates the tape backup from Site-1, Site-2, and Site-3. Each IOA cluster represents a site pair, which means that there are three unique clusters. This topology provides segregation and scalability of the IOA service across multiple sites. In Site-4, a single switch participates in multiple IOA clusters. 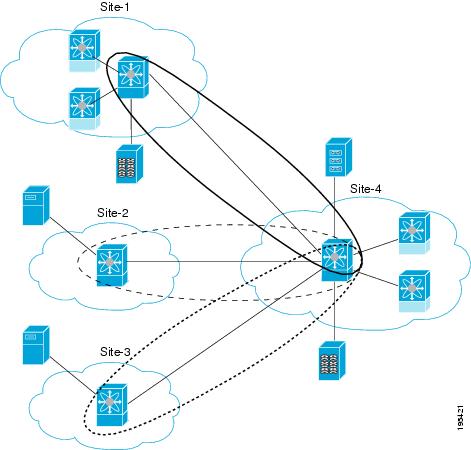 In certain other topologies, the edge switches are connected across the WAN. In such cases, we recommend that you do the following:

Transition the WAN links from the edge to core switches to provide consolidation and optimal routing services.

Deploy the IOA service in the core switches.

IOA is supported for IVR flows starting from the Cisco MDS NX-OS Release 5.0(1a).

When you deploy IOA, consider these general configuration guidelines:

The IOA flows bound to the IOA interfaces on the module undergoing an upgrade will be affected.

Clustering infrastructure uses the management IP network connectivity to communicate with the other switches. In the case of a switchover, the management IP network connectivity should be restored quickly to preserve the cluster communication. If the management port is connected to a Layer 2 switch, spanning-tree must be disabled on these ports. In a Cisco Catalyst 6000 Series switch, you can implement this by configuring the spanning-tree portfast command on these ports which will treat these ports as access or host ports.

Deploy IOA interfaces (MSM-18/4 or SSN-16) in the core switches in both core-edge and edge-core-edge topologies. When multiple core switches are interconnected across the MAN or WAN, do the following:

Deploy the IOA interfaces equally among the core switches for high availability.

Interconnect core switches in each site for optimal routing.

Plan for Geneneration 2 and above line cards to avoid any FC-Redirect limitations. There is a limit of only 32 targets per switch if Generation 1 modules are used to link the ISLs connecting the IOA switch and target switches or if the host is directly connected to a Generation 1 module.

Depending on the WAN transport used, you may have to tune the Fibre Channel extended B2B credits for the round-trip delay between the sites.

When you configure IOA, consider the following resiliency guidelines:

Tuning for E_D_TOV: Fibre Channel Error Detect Timeout Value (E_D_TOV) is used by Fibre Channel drives to detect errors if any data packet in a sequence takes longer than the specified timeout value. The default timeout value for E_D_TOV is 2 seconds. IOA has an built-in reliability protocol (LRTP) to detect and recover from ISL failures by doing the necessary retransmissions. However, you need to ensure that it recovers before the expiry of E_D_TOV. LRTP is not required if the FCP-2 sequence level error-recovery procedures are enabled end-to-end (primarily in the tape drivers) because this helps to recover from timeout issues.When the FCP-2 sequence level error-recovery procedure is not enabled, you must tune certain timers in order to protect the site from ISL failures.

Reduce the LRTP retransmit value from the default value of 2.5 seconds to 1.5 seconds. For more information, see the "Setting the Tunable Parameters" section on page 4-16.

When you configure IOA, consider the following limitations:

Only 512 flows are supported when IOA and IVR co-exists.

In Cisco NX-OS Release 4.2(1), only IOA and FCIP can run on the same SSN-16 as in the following example:

IOA decides the master based on a master election algorithm. If you have multiple switches in the IOA cluster, you must add all the switches in the site that you manage from into the cluster before adding switches from the remote site. For more information see Appendix B, "Cluster Management and Recovery Scenarios."

IOA clustering framework uses IP connectivity for its internal operation. In Cisco NX-OS Release 4.2(1), if an IOA cluster becomes nonoperational due to IP connectivity, IOA flows are brought down to offline state. In this state, the hosts may not be able to see the targets. To accelerate the IOA flows, the IOA cluster must be operational and there must be at least one IOA switch in each site that is online within this IOA cluster.

An IOA interface is configured.

If IOA flows are configured and a copy running to startup is not performed, FCR rules are removed automatically for these flows in all VSANs except VSAN 1. VSAN 1 is a default VSAN that is always persistent even without a copy running to startup and so, FCR rules are preserved for this VSAN. To recover from this, you can execute "clear fc-redirect decommision-switch" prior to the reboot of the switch to purge the FCR configs in VSAN 1. Alternately, you can cleanup the entire IOA flow configuration prior to the reboot of the switch.

If an MDS switch is connected through an ISL using a twinpeak line card and the targets are connected to the MDS switch, then this MDS switch can connect to a maximum of 160 targets. This because the maximum number of ELS entries on the twinpeak line card is 320 entries. For example, in an IOA configuration that has 5 flows (1 host : 1 target) you can have 10 ELS entries on a module with ISL and in a IOA configuration that has 10 flows (2 hosts : 1 target), you can have only 10 ELS entries. This because ELS entries depends on the number of targets.

IOA flow takes a few seconds to become active upon certain triggers such as host or target port flaps. PLOGI from the hosts are buffered until the IOA flow becomes active. Once the IOA flow becomes active, it sends a RSCN to request the host to PLOGI again. Certain target arrays perform a few back-to-back PLOGIs prior to the flow becoming active and upon seeing a failure requires a manual corrective action. To prevent this, IOA flows that have been configured for Write-Acceleration are set up with a default timeout of 10 seconds after which the flow becomes unaccelerated. This is useful specifically in cases where IOA is unable to take over the flow prior to the timeout. For example, linecard reloads where no other IOA interface is available to handle the flow. In certain target arrays, the 10 second timeout is not sufficient and these arrays may require manual recovery using the storage management interfaces. One example of such a target array is HDS AMS.

The workaround for such a case would be to set the timeout to 5 seconds using the CLI command "tune wa-fcr-rule-timeout 5" under the ioa cluster configuration sub-mode. This configuration is cluster-wide persistent across reboots.

Table 3-1 lists the IOA configurations and the corresponding limits.

When the new flows are load balanced again to the functional IOA interface, the soft limit is enforced to account for IOA interface failures. If the number of switches in the SAN exceeds the scalability limit, consider using CFS regions as described in "Using FC-Redirect with CFS Regions" section on page 2-4.