This ability allows the MDS 9000 switch to consolidate multiple physical fabrics of different modes into a single physical fabric separated by VSANs, while leveraging IVR to provide the necessary connectivity between the VSANs on a per device basis. IVR provides additional benefits, including the ability to connect a core PID 0 Brocade switch to a core PID 1 Brocade switch. Normally, an outage would be required to change the core PID of one of the switches. IVR allows the MDS 9000 switch to act as a conduit between two different legacy switch interop modes. Third-party switches are allowed to be members of an IVR transit VSAN.

VSANs in interop mode should not contain FCoE ports.

Topologies such as the one shown in Figure 10-1 are now possible. 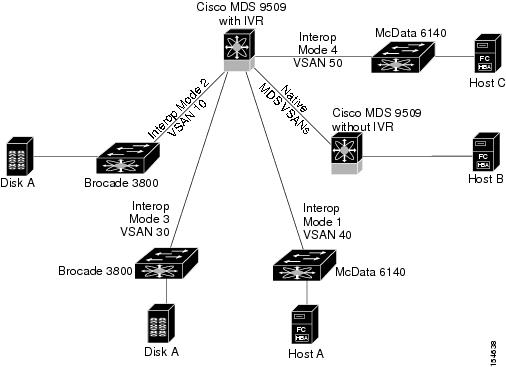 In Figure 10-1, IVR would enable Host A (which is in VSAN 40 on a McData 6140) to access the storage attached to the Brocade 3800 (Disk A). Prior to MDS SAN-OS Release 1.3(4a), an outage would be required on both the McData director and the Brocade 3800 to configure them for a common interop mode. Host C, residing on a McData 6140, can also access devices on any other VSAN.

Setting Up IVR with Interop Mode

To set up IVR with interop mode VSANs, follow these steps:

When third-party switches are involved in an IVR configuration, use the ivr virtual-fcdomain-add command to enable RDI mode, as third party switches do not often query the remote name server unless it is present in the domain list. Issuing this command causes all virtual domains to appear in the domain list. This command should only be issued in the VSANs (border VSANs) in which the specified switch is present. Issuing the ivr virtual-fcdomain-add command is required only in edge or border VSANs. It is not required in MDS native VSANs.

If multiple IVR-enabled switches exist in an edge or border VSAN, the following error message may be displayed in the system messages: (DEVICE_ON_WRONG_NATIVE_VSAN). This message can be ignored.

Common commands issued on a Brocade switch show the expected information when working with devices presented via IVR. For example:

Notice that domain 239 is on the same switch as domain 1, but it has a cost of one more. The higher cost is because IVR adds 1 for converting from one VSAN to another. However, the Brocade switch thinks it is actually another hop.

When working with IVR-1, note these two caveats:

If an IVR zone set is active in a VSAN running in an interop mode, regular zone changes (such as zone set activation, reactivation or deactivation for zones that do not require IVR services) should always be initiated from the IVR border switch (the IVR-enabled MDS 9000 switch) for that VSAN. This prevents disruption to ongoing traffic between IVR initiators and targets that are allowed by both the previous active zone set and the new active zone set. Otherwise, traffic disruption is expected in the previous case and a zone change may also fail, because only the border switch has the IVR configuration for that VSAN.