An APIC VMM domain profile is a policy that defines a VMM domain. The VMM domain policy is created in APIC and pushed into the leaf switches.
Figure 1. ACI VMM Domain VM Controller Integration 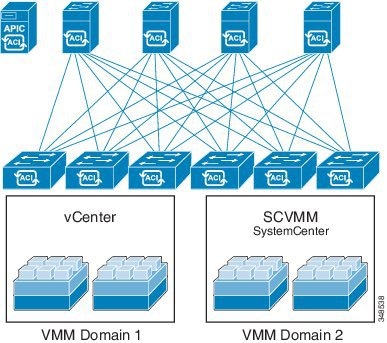 VLAN pools represent blocks of traffic VLAN identifiers. A VLAN pool is a shared resource and can be consumed by multiple domains such as VMM domains and Layer 4 to Layer 7 services.

A VMM domain can associate with only one dynamic VLAN pool. By default, the assignment of VLAN identifiers to EPGs that are associated with VMM domains is done dynamically by the APIC. While dynamic allocation is the default and preferred configuration, an administrator can statically assign a VLAN identifier to an EPG instead. In that case, the identifiers used must be selected from encapsulation blocks in the VLAN pool associated with the VMM domain, and their allocation type must be changed to static.

The APIC provisions VMM domain VLAN on leaf ports based on EPG events, either statically binding on leaf ports or based on VM events from controllers such as VMware vCenter or Microsoft SCVMM.

The ACI fabric associates tenant application profile EPGs to VMM domains, either automatically by an orchestration component such as Microsoft Azure, or by an APIC administrator creating such configurations. An EPG can span multiple VMM domains and a VMM domain can contain multiple EPGs.
Figure 2. VMM Domain EPG Association 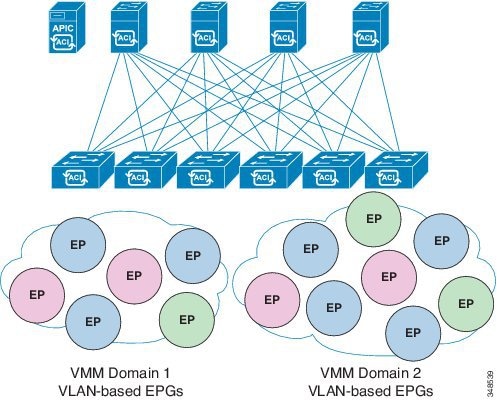 In the illustration above, end points (EP) of the same color are part of the same end point group. For example, all the green EPs are in the same EPG even though they are in two different VMM domains. 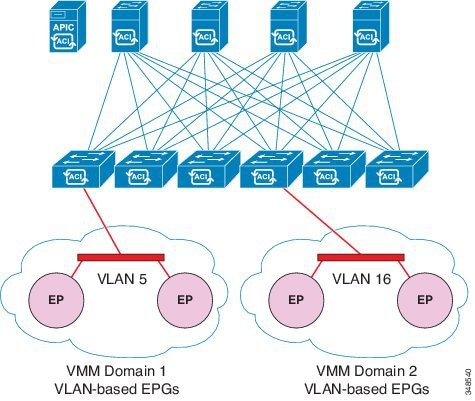 EPGs can use multiple VMM domains in the following ways:

Applications can be deployed across VMM domains.
Figure 4. Multiple VMM Domains and Scaling of EPGs in the Fabric 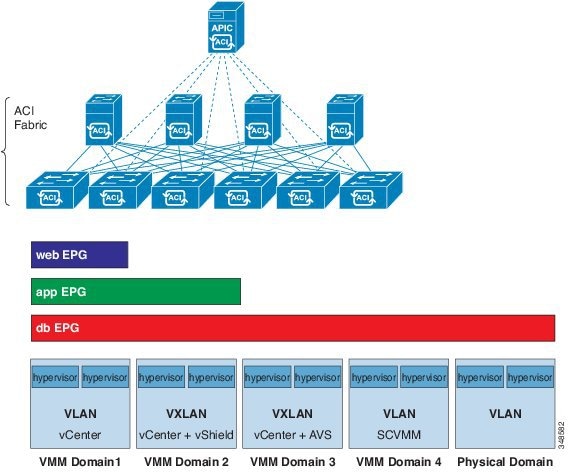 An AEP is required to deploy VLAN pools on leaf switches. Encapsulation blocks (and associated VLANs) are reusable across leaf switches. An AEP implicitly provides the scope of the VLAN pool to the physical infrastructure.

The following AEP requirements and dependencies must be accounted for in various configuration scenarios, including network connectivity, VMM domains, and multipod configuration:

An override policy at the AEP can be used to specify a different physical interface policy for a VMM domain. This policy is useful in scenarios where a VM controller is connected to the leaf switch through an intermediate Layer 2 node, and a different policy is desired at the leaf switch and VM controller physical ports. For example, you can configure LACP between a leaf switch and a Layer 2 node. At the same time, you can disable LACP between the VM controller and the Layer 2 switch by disabling LACP under the AEP override policy.

Whenever an EPG associates to a VMM domain, the administrator can choose the resolution and deployment preferences to specify when a policy should be pushed into leaf switches.

Once the policies are downloaded to the leaf software, deployment immediacy can specify when the policy is pushed into the hardware policy CAM.

Follow the sequence below to assure that the APIC request to delete a VMM domain automatically triggers the associated VM controller (for example VMware vCenter or Microsoft SCVMM) to complete the process normally, and that no orphan EPGs are stranded in the ACI fabric.

If this sequence is not followed, the VM controller does delete the virtual switch associated with the APIC VMM domain. In this scenario, the VM administrator must manually remove the VM and vtep associations from the VM controller, then delete the virtual switch(es) previously associated with the APIC VMM domain.

When logged in to the APIC GUI, you can verify the GUI mode you are in. The mode you have entered is displayed in the top right corner of the GUI. You can choose to operate in one of two modes:

Caution: Cisco recommends that you do not mix configuration modes (Advanced or Basic). When you make a configuration in either mode and change the configuration using the other mode, unintended changes can occur. For example, if you apply an interface policy to two ports using Advanced mode and then change the settings of one port using Basic mode, your changes might be applied to both ports.

You can also change from one GUI mode to another or toggle between modes as follows:

About NetFlow with Virtual Machine Networking

The NetFlow technology provides the metering base for a key set of applications, including network traffic accounting, usage-based network billing, network planning, as well as denial of services monitoring, network monitoring, outbound marketing, and data mining for both service providers and enterprise customers. Cisco provides a set of NetFlow applications to collect NetFlow export data, perform data volume reduction, perform post-processing, and provide end-user applications with easy access to NetFlow data. If you have enabled NetFlow monitoring of the traffic flowing through your datacenters, this feature enables you to perform the same level of monitoring of the traffic flowing through the Cisco Application Centric Infrastructure (Cisco ACI) fabric.

Instead of hardware directly exporting the records to a collector, the records are processed in the supervisor engine and are exported to standard NetFlow collectors in the required format.

For more information about NetFlow, see the Cisco APIC and NetFlow knowledge base article.

A virtual machine manager exporter policy (netflowVmmExporterPol) describes information about the data collected for a flow that is sent to the reporting server or NetFlow collector. A NetFlow collector is an external entity that supports the standard NetFlow protocol and accepts packets marked with valid NetFlow headers.

You must have configured the following things:

The following procedure uses the NX-OS-style CLI to consume a NetFlow exporter policy under a VMM domain.

The following procedure enables or disables NetFlow on an endpoint group using the NX-OS-style CLI.

The following example XML shows how to configure a NetFlow exporter policy for VM networking using the REST API:

The following example XML shows how to consume a NetFlow exporter policy under a VMM domain using the REST API:

Enabling NetFlow on an Endpoint Group for VMM Domain Association

The following example XML shows how to enable NetFlow on an endpoint group for VMM domain association using the REST APIs: