This document provides the compatibility information, usage guidelines, and the scale values that were validated in testing this Cisco ACI Simulator release. Use this document in combination with the documents listed in the “Related Documentation” section.

Table 1 shows the online history change for this document.

The ACI Simulator includes simulated switches, so you cannot validate a data path. However, some of the simulated switch ports have been mapped to the front-panel server ports, which allows you to connect external management entities such as ESX servers, vCenters, vShields, bare metal servers, L4-L7 services, AAA systems, and other physical or virtual service appliances. In addition, the ACI Simulator allows simulation of faults and alerts to facilitate testing and demonstrate features. 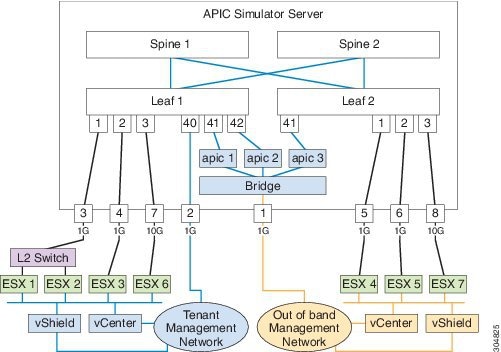 The 1.0(2j) release of the ACI Simulator supports the following software:

Chrome version 35, at minimum, on Mac and Windows

Firefox version 26 or higher on Mac and Windows

This section includes usage guidelines that are specific to this release, and includes the following topics:

Observe the following guidelines when using the 1.0(2j) software release:

Default names in the initial setup for node names and the cluster configuration.

cluster size and the number of APIC nodes.

Table 2 lists the scale values that were validated in testing this ACI Simulator 1.0(2j) release.

This section lists the product documentation for the Cisco APIC.

The Cisco ACI Simulator documentation is available at http://www.cisco.com/c/en/us/support/cloud-systems-management/application-centric-infrastructure-simulator/tsd-products-support-series-home.html.