This chapter describes how to use Hot Standby Router Protocol (HSRP) on the switch to provide routing redundancy for routing IP traffic without being dependent on the availability of any single router.Unless otherwise noted, the term switch refers to a standalone switch and to a switch stack.

Routers in an HSRP group can be any router interface that supports HSRP, including routed ports and switch virtual interfaces (SVIs).

HSRP detects when the designated active router fails, and a selected standby router assumes control of the Hot Standby group's MAC and IP addresses. A new standby router is also selected at that time. Devices running HSRP send and receive multicast UDP-based hello packets to detect router failure and to designate active and standby routers. When HSRP is configured on an interface, Internet Control Message Protocol (ICMP) redirect messages are automatically enabled for the interface. 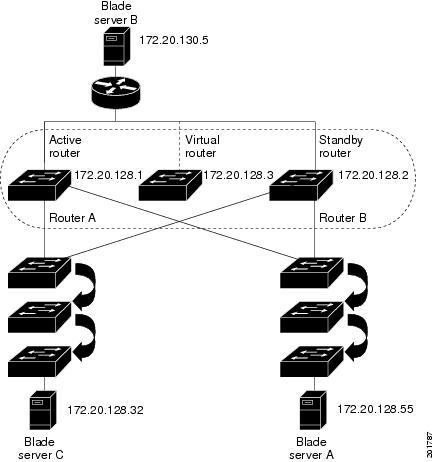 The switch supports Multiple HSRP (MHSRP), an extension of HSRP that allows load sharing between two or more HSRP groups. You can configure MHSRP to achieve load-balancing and to use two or more standby groups (and paths) from a blade server network to a server network. 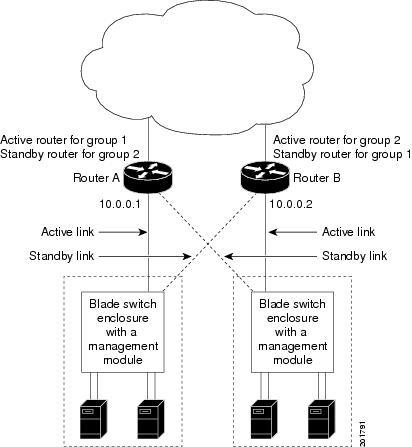 All Layer 3 interfaces must have IP addresses assigned to them. See the "Configuring Layer 3 Interfaces" section on page 11-24.

To enable MHSRP and load-balancing, you configure two routers as active routers for their groups, with virtual routers as standby routers. This example shows how to enable the MHSRP configuration shown in Figure 41-2. You need to enter the standby preempt interface configuration command on each HSRP interface so that if a router fails and comes back up, the preemption occurs and restores load-balancing.

ICMP redirect messages are automatically enabled on interfaces configured with HSRP. ICMP is a network layer Internet protocol that provides message packets to report errors and other information relevant to IP processing. ICMP provides diagnostic functions, such as sending and directing error packets to the host. This feature filters outgoing ICMP redirect messages through HSRP, in which the next hop IP address might be changed to an HSRP virtual IP address. For more information, see the Cisco IOS IP Configuration Guide, Release 12.2.

This is an example of output from the show standby privileged EXEC command, displaying HSRP information for two standby groups (group 1 and group 100):