This application note provides an overview on how to configure a Performance Routing (PfR) master controller in a redundant configuration. Additional information and more detailed examples and command output from both deployment scenarios can be found in the Transport Diversity: Performance Routing (PfR) Design Guide at http://www.cisco.com/en/US/netsol/ns817/networking_solutions_program_home.html.

There are two deployment models shown in this application note:

This section provides an overview about the dedicated and collocated master controller topologies.

These assumptions are applicable to both deployment models:

The reader is familiar with implementing PfR and the focus of this document is to provide an overview of how to configure a PfR master controller in a standby configuration. This enables WAN optimization to function in the event the primary master controller fails or is taken out of service for maintenance.

More detailed output and validation of these deployments is available in the Transport Diversity: Performance Routing (PfR) at http://www.cisco.com/en/US/netsol/ns817/networking_solutions_program_home.html.

The key-string value of cisco is a lab standard and not recommended for a customer deployment.

To implement a standby master controller, do the following:

Configure the PfR master controller configuration identically on both primary and standby.

Configure the border routers to use the HSRP virtual IP address to identify the master controller.

The standby master controller functions is in a stateless failover mode. However, standalone (dedicated) master controllers are not in the data plane switching path, so user traffic is not disrupted; it is simply not optimized during failover and recovery.

The general guideline is the standby master controller is effectively on-line and operational beginning with the monitor period following the failure. Therefore, given a 1-minute monitor period, prefixes can be managed within 2 to 3 minutes following a failure.

More specific implementation details are described in the following section.

In this sample configuration, the master controller is configured to instruct the border routers to learn traffic for a 1-minute interval (monitor-period 1) and initiate subsequent monitoring (periodic-interval 0) immediately.

If testing this failure condition, administratively shutting down the primary master controller interface does not demonstrate a true failure condition. The Cisco IOS sends a TCP RST for the active TCP connection on that interface to the border routers. The border routers respond by tearing down their TCP connection and retry approximately 5 seconds later to establish a connection to the master controller IP address.

PfR keepalive can be disabled in this configuration. By doing so, it also eliminates the overhead associated with sending and responding to keepalives and can help in scaling.

Two border routers are implemented, each with two external (exit) links. A primary and standby master controller are implemented as shown in Figure 1. 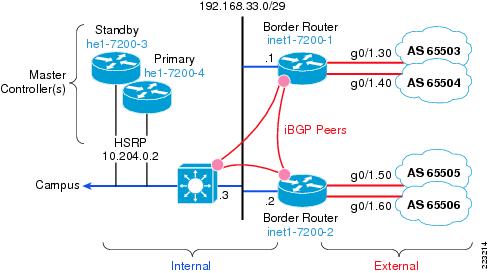 In the test environment, both primary and standby master controller are configured identically as far as the oer master portion of the configuration, which is shown as follows:

The configured standby priority of 110 is higher than the default value of 100, making this router the preferred active HSRP router.

The default value for HSRP timers is 3-second hello and 10-second dead (standby timers 3 10). Given this is a stateless failover configuration and these master controllers are not in the data path plane (they are not switching any packets, only managing the master controller database), there is no appreciable benefit to aggressively tune the HSRP timers to any value lower than the default values. In fact, increasing the HSRP hello and dead interval times is recommended so that a HSRP failover due to CPU busy on the primary master controller (a false positive switchover) is avoided. HSRP failover and recovery within 30 seconds to one minute is sufficient for most deployments.

The hold-queue values of 4096 for both input and output is recommended as all packets on these dedicated master controller routers is process switched. Buffer tuning is also advised to eliminate buffer misses and failures.

Both border routers are identically configured as shown below:

The collocated master controller topology is typically associated with a branch deployment model where the number of network prefixes or applications being managed are substantially less than at a campus hub location. Figure 2 is a reference for the accompanying sample configuration below. 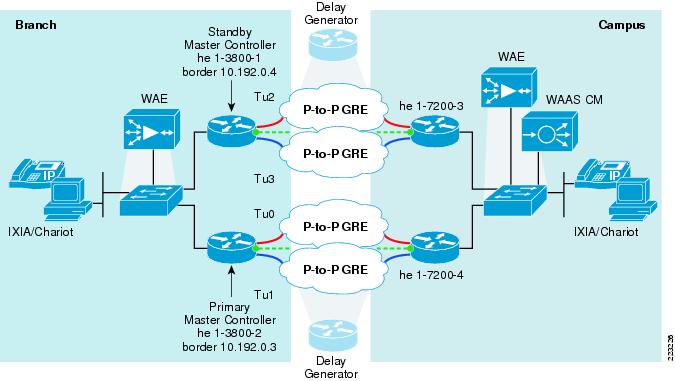 Configuration files for both branch routers are shown in the following section. The campus routers could be similarly configured as the branch routers, or a dedicated master controller topology could be implemented.

In the configuration examples, oer-map BRANCH is omitted for brevity.

By implementing a primary and standby master controller at branch locations, traffic optimization can continue to function in the event one of the two branch routers fails or is taken out of service for maintenance.