This case study explains how to encrypt p2p GRE tunnels with a dynamic crypto map to support deployments where the remote IP address is not statically defined. This technique can also be used when there is static IP addressing on the branch office where the goal of the network administrator is to simplify the headend configuration.

To fully understand the mechanics of this configuration, is it helpful to visualize the topology as a tunnel within a tunnel. The IP addresses of the crypto endpoints are routable over the network. The Internet is the most common deployment. The headend crypto IP address is a static IP address. The IP address of the outside interface of the branch router is also routable over the Internet but is dynamically assigned by the broadband or Internet service provider, either through DHCP or PPPoE. The branch router always initiates the p2p GRE and crypto tunnel to the crypto headend IP address. The interesting traffic (traffic matching the crypto ACL) is either a GRE keepalive or hello packet of whatever routing protocol is configured on the branch router.

The crypto headend router learns the dynamically assigned IP address of the outside interface of the branch router because it is the source IP address in the ISAKMP packets. Following successful negotiation of IKE Phase 1 (main mode) and subsequently IKE Phase 2 (quick mode), the outer (crypto) tunnel is established providing transport for the p2p GRE tunnel.

A typical customer topology includes two p2p GRE tunnels from the branch router to separate crypto headend routers. One tunnel is the primary tunnel and the second is the backup tunnel providing redundancy in the event the primary headend or network connection failure. To simplify the explanation, only one branch router, headend, and tunnel is shown in this section and in Figure 5-1.

The addressing scheme and naming conventions are defined as follows:

Routers in this example are assigned address space within a /22 prefix.

This address space is advertised as a summary route to the headend(s).

Loopback 1 is used for Network Management.

Tunnel 1 is the p2p GRE tunnel to the primary headend.

Tunnel 0 is the p2p GRE tunnel to the secondary headend (if present).

The last octet of the IP address of Loopback 0 corresponds to the branch site number (17,18, and so on).

The p2p GRE tunnel interface instance number represents the branch router supported by this interface. For example, branch_17 is Tunnel17, and branch_18 is Tunnel18, and so on.

A static or dynamically learned route for 10.63.0.0/16 is present to switch packets out the interface with the dynamic crypto map configured.

All primary headend assumptions also apply to this secondary headend.

Based on Table 5-1, a partial configuration example for the branch router (branch_17) is shown.

Items to note include the following:

The primary headend outside tunnel (for branch 17) and loopback interfaces are shown. The inside interface as well as tunnel interfaces for other branches are not shown.

Note that both the primary and secondary headends are configured using EIGRP as the IGP; however, to emphasis the routing requirements, two static routes are shown. The first is a default (0/0) route using the enterprise campus Internet gateway as a next hop. The second route is a route with a /16 prefix for network 10.63.0.0, also to the enterprise campus Internet gateway as a next hop. This route is not required, because the default (0/0) route accomplishes that same purpose. It is included to draw attention to the fact the tunnel source IP addresses of the branch routers are allocated from the 10.63.0.0 address space as individual /32 networks. This /16 prefix route illustrates that the encrypting router selects the p2p GRE packets for encryption based on the fact the p2p GRE encapsulated packet is routed out the interface (outside) that contains the crypto map configuration.

The crypto map of the branch router is simply a static crypto map matching the p2p GRE tunnel endpoint IP addresses. Only the primary headend is shown.

The primary headend is configured with a dynamic crypto map. Note there is no match address configured. It is learned dynamically from the branch router.

The match address ACL on the crypto headend crypto map is optional. If a remote site has not established its crypto tunnel, the headend router sends p2p GRE packets out the crypto map interface unencrypted. However, this a minimal security exposure for two reasons: the destination IP address of the unencrypted p2p GRE packet in this example is an RFC1918 IP address and is not routed over the Internet by the ISP; and the contents of these packets are either GRE keepalives or routing protocol hello packets. Data packets are not routed until the p2p GRE tunnel is up and the routing protocol has formed a neighbor relationship.

Note that crypto maps are not required on tunnel interface beginning in 12.2(13)T.

The remote router is configured to encrypt p2p GRE packets. The networks advertised by the headend through the tunnel interface determine what gets encrypted or what is routed to the default route to the Internet. If the headend router advertises a default (0/0) route through the p2p GRE tunnel, split-tunnel is not implemented on the branch router. If the headend router advertises, for example, 10.0.0.0/8, split-tunnel is enabled and all packets not destined for 10.0.0.0/8 are routed to the Internet. Of course, the network manager should include an inbound access list as one component in securing the branch router, and this along with Context-Based Access Control (CBAC, the Cisco IOS firewall feature) controls if the return packets are permitted into the branch network.

The following is an example of the headend configuration advertising only a default route to branch 17.

It is assumed the network manager has either a default route learned from an EIGRP AS 44 neighbor or the static route to the default network is redistributed into this configuration.

The branch_17 router has an outside IP address of 192.168.31.2. Assume this is an Internet routable IP address and was learned by DHCP.

As an illustration, the primary headend dynamic crypto map is shown:

Note in the above display that the dynamic crypto map entry has been updated with the crypto map ACL (source and destination IP address are reversed accordingly) configured on branch_17.

The ISAKMP SA is displayed for branch_17, showing that the source IP address of the ISAKMP session is the address learned by DHCP.

Using the configuration guide in this section, network managers can implement p2p GRE tunnels in network topologies where the IP address of the branch router is learned dynamically. Static crypto maps are configured on the headend router; as branch routers are brought online, no change to the headend crypto configuration is required. The headend router needs only a corresponding p2p GRE tunnel interface for the new branch.

The key objective of this case study is to provide a reference example for a site-to-site VPN design. It provides an example of how these design principles can be applied in a real-world scenario.

The details of the service provider backbone and WAN connectivity are not addressed in the case study, because the focus is on VPN deployment on the enterprise customer side.

Moose Widgets has been developing products at their Portland, Oregon headquarters (HQ) for several years. In addition, Moose has a single distribution center and 20 retail outlets across the United States (US).

Currently, Moose Widgets uses a traditional Frame Relay (FR) WAN service to connect its headquarters to its distribution center. There is currently no connectivity to retail outlets, with the exception of a few outlets that use a personal computer (PC) to dial-up to the corporate HQ. The current network topology is shown in Figure 5-2. 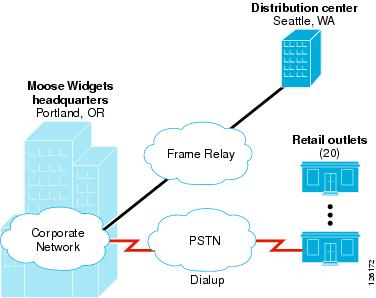 Moose has recently acquired two companies; one in San Jose, California and the other in Great Falls, Montana. Moose wants to connect its newly acquired companies and its retail outlets to its corporate network as an intranet. In addition, Moose plans to expand its retail outlets to 40-50 over the next year and sees already that it will most likely need additional distribution centers on the East and West coasts of the US.

As part of a corporate initiative, Moose is implementing a centralized inventory tracking system to better manage inventory in its growing distribution centers and retail outlets to significantly lower costs. The existing dial-in access does not provide adequate bandwidth to support the new applications. Further, Moose is concerned about escalating dial-in charges as each retail outlet relies more on corporate resources. As a result, Moose is looking to transition to a dedicated connection for each of its retail outlets using the Internet and VPN technology.

Moose estimates their traffic requirements for their various site locations as shown in Table 5-2.

A site-to-site IPsec VPN will be deployed with the Moose corporate HQ serving as the headend, and all other locations treated as branch sites. This allows a branch office to subscribe to a local ISP, get authenticated, and be inside the corporate intranet.

At the same time, end-to-end encryption is attained using IPsec tunneling. Switching to VPN offers Moose significant cost savings over dial-up solutions and the ability to outsource to a service provider who has VPN service as a core competency, providing more efficiency with cost and scalability.

Following the design practice outlined in Chapter 2, "Point-to-Point GRE over IPsec Design and Implementation," and Chapter 3, "Scalability Considerations," there are four main design steps to perform:

Sizing of the headend devices and product selection

Sizing of the branch site devices and product selection

The design is straightforward and offers flexibility. As new retail locations are put into service, Moose can purchase Internet connectivity from the local ISP, deploy a Cisco VPN router at the branch site, configure the IPsec tunnels to the headend devices at the corporate headquarters, and be up and running in a short amount of time.


EIGRP is recommended as the routing protocol, with route summarization.

Although the traffic loads involved do not exceed the recommended capacity of a single headend device, Moose has indicated they would like redundancy built-in at the central location. The tunnels from the remote ends will be allocated to each of the headend devices to balance the traffic load. Secondary tunnels will also be configured and allocated so that, in the event of a headend failure, traffic will be transitioned over to the partner headend device.

Applying the sizing algorithm defined in section Headend Scalability, page 3-3, the calculation of headend sizing based on number of GRE tunnels is as follows:

Next, using the throughput estimates from Table 5-4, the calculation of headend sizing based on branch traffic throughput is as follows:

Presented with the headend product options, the customer selects to deploy two Cisco 7206VXR NPE-G1s, each equipped with an SA-VAM2 hardware encryption adapter.

The primary consideration for sizing of branch office sites is expected traffic throughput. Accordingly, starting with Table 5-2, and applying the concepts presented in Branch Office Scalability, page 3-9, the branch products selected are summarized in Table 5-4.

The new network topology is shown in Figure 5-3. 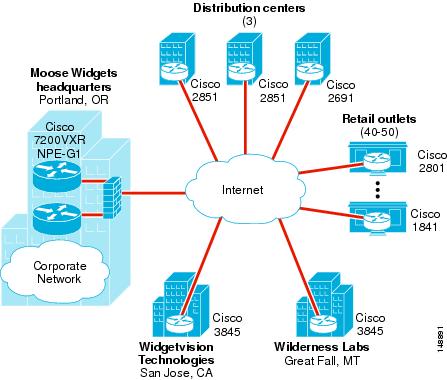