While the recommended design is to archive locally, it is possible to route the iSCSI traffic through the ISR router backplane and the WAN interface(s) to reach a target IP address in the enterprise campus. Locating an iSCSI server in the campus and transporting archives across the WAN is of interest to customers for management and support efficiencies. Many customers, knowing the amount of bandwidth required to transport video feeds from surveillance cameras, have requested design guidance on what, if any, benefit implementing WAAS has on iSCSI transport of video archives over a WAN.

The iSCSI operates over TCP port 3260 in this implementation. It does not require any dedicated cabling, it uses existing LAN switches and the IP network. iSCSI operates as a clear text protocol, there is no encryption inherent in the protcol. If it is transported over a public WAN or the nature of the video feeds require the need for data privacy, IPSec encryption must be deployed to meet that requirement. The TCP session between the NME-VMSS and iSCSI appliance is persistent, or long-lived. It is only terminated or initiated to recover from a timeout or manual shutdown.

The test topology is very similar to the topology used to test WAAS and PfR between branch and campus. The notable difference is the placement of the iSCSI appliance. Previously, it was attached to a LAN Gigabit Ethernet switch in the branch location. Now, it is connected to the LAN switch in the campus location. The IP address of the server has changed accordingly. There are four IP Video Surveillance cameras in the topology; an Axis 223M (MJPEG), Axis 207 (MPEG-4), Axis 207MW (MJPEG), and a Cisco 2500 series (MPEG4). Results are consistent across all cameras. The iSCSI server is a Buffalo (www.buffalotech.com) TeraStation Pro™ II iSCSI Rackmount Storage System. Figure 1 illustrates the topology. 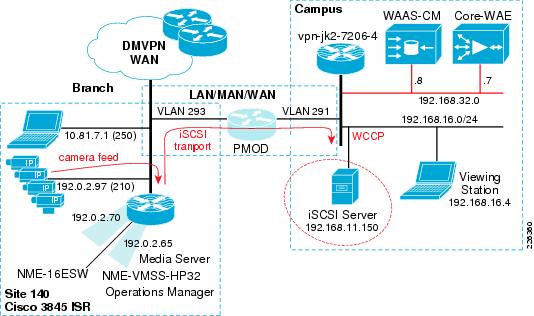 The path of the camera video feeds, iSCSI transport and location of the iSCSI server in the topology are shown for reference.

The relevant portion of the branch router configuration is shown in this section. The WCCP configuration on the router is not changed from what was documented in the previous chapter. Because the iSCSI TCP session originates from the NME-VMSS-HP32 logical interface (Integrated-Service_Engine 3/0) the iSCSI TCP session is intercepted by WCCP configured on that interface.

The steps to move the iSCSI server from the branch to the campus is to:

Deselect Media1_0 as disk from the Media Server.

Enter configuration mode of the VMSS network module and issue a `state disable' for Media1 to gracefully shutdown the service.

Change the target IP address on the VMSS network module. Because the volume is already formatted, it will become available for use.

Select Media1_0 as a disk to be used by the Media Server.

Following the above changes, the relevant portion of the VMSS network module configuration is shown as follows:

The above command was issued on Wed Jan 14 14:06:04 edt 2009 and the start time of the WAAS optimization is 9 January, demonstrating the persistence of the iSCSI TCP session.

In this test, the WAN link in use has a random delay averaging 60 milliseconds in each direction with packet loss of 1 packet per 10,000 packets.

In the previous section, the WAAS Effective WAN capacity report is used to demonstrate the bandwidth savings. In this section, NetFlow is used as a demonstration of another method of validating the WAN bandwidth savings. Understanding how NetFlow reports the flows prior to de-compression by the WAE as well as from WAE to the application server also provides a means of understanding how WAAS interception functions. In this test, a NetFlow export is configured on the campus router to a unix server. These Version 5 flows are captured and summarized.

The complete record layout for NetFlow Version 5 Flow Record Format is available on www.cisco.com. The SNMP index of the input and output interface is part of the flow record. In order to associate these Ifindex values with the interface name, the show snmp mib ifmib ifindex command is issued on the campus router and portions of the output are as follows:

Both the WAAS compressed and optimized and the original flows are reported by NetFlow in the exported records. Because the source and destination IP address and port numbers are unchanged by WAAS, the Ifindex values are needed to identify the flows seen input from the WAN interface, and then the flow as it is observed following WCCP redirection.

NetFlow summarizes and reports the flow based on the source and destination IP address, port number, protocol, and ToS byte. The ECN bits are part of the ToS byte. The ECN field is bits 6 and 7 in the IPv4 ToS octet.

The layout of the ToS byte from RFC 3168 is as follows:

WAAS sets the ECN bits and because NetFlow v5 reports all eight bites of the ToS byte, the flow observed from the WAN interface is reported as two flows; with and without the ECN bits set.

The Ifindex numbers displayed by the show snmp mib ifmib ifindex command are referenced on the topology as follows:

Ifindex 0 is the router chassis itself

These are shown in Figure 2.

In testing, NetFlow v5 export is configured on the campus 7206 and summarized. The iSCSI traffic flows are extracted from the summarized data and presented in Table 1. A single archive of one camera, an Axis 207MW, is active during the data capture.

As a point of comparison and verification, the Media Server provides the details of that same data when stored as an archive on the iSCSI disk. This output is shown as follows:

This is a five-minute archive of a 1280 x 720 resolution Motion JPEG that on disk is 224,512 Kbytes. The NetFlow export includes IP Layer-3 overhead which accounts for the higher number of bytes reported by NetFlow.

Both Motion JPEG and MPEG4 or H.264 camera feeds are compressed by the encoding function of the IP Camera. Persistent Lempel-Ziv (LZ) compression can achieve compression ratios in the order of 2:1, 5:1 or even up to 100:1 if the data contains common strings of characters. LZ compression can be beneficial for data which has not been previously traversed the network and categorized by Data Redundancy Elimination (DRE). DRE maintains a database of data that has been observed on the network. DRE is application independent. DRE can eliminate up to 99 percent of redundant network traffic and provide up to 100:1 compression.

Because the files being transported and archived to the iSCSI server are solely video feeds, and this data has been compressed by the encoding function of the IP cameras, the iSCSI transport shows little bandwidth savings. However, WAAS can be very instrumental in compressing application data to free bandwidth for other uses, including network video traffic.