Organizing Controls with the Cisco SCF

The IT infrastructure architecture must be designed and implemented with security at its core in order to enable key business activities, while ensuring the confidentiality, integrity, and availability of the IT infrastructure and critical business and customer data. An organization's security requirements are derived from many sources, including organization goals and objectives, industry and international standards, and industry and government regulations. The process of designing, implementing, and operating an infrastructure that meets these business and security requirements benefits from the application of a coherent model to view and organize the myriad security control requirements.

The Cisco Security Control Framework (SCF) model defines a structure of security objectives and supporting security actions to organize security controls. The Cisco SCF model is based on proven industry best practices and security architecture principles, and the vast practical experience of Cisco engineers in designing, implementing, assessing, and managing service provider, enterprise, and small and medium-sized business (SMB) infrastructures. Using the Cisco SCF model, organizations can align security requirements and controls into logical groups to facilitate the understanding and communication of the control architecture for their IT infrastructure.

The organization of the Cisco SCF model is designed to increase the focus on three primary goals related to the security of the IT infrastructure and assets. These goals are as follows:

Protect the IT infrastructure

The design of the Cisco SCF model brings together the regulation- and standards-based requirements with fundamental architectural principles, industry best practices, and a wide breadth of engineering experience from inside and outside of Cisco. The result is a vendor-agnostic model that supports the organization and definition of control sets to meet each organization's specific objectives.

Table 1 defines the terms relevant to the Cisco SCF model.

The Cisco SCF is composed of a model, methodology, control structure, and control sets designed to support the assessment of technical risk in an infrastructure architecture. The Cisco SCF integrates into an ongoing process of continuous improvement to incrementally improve the security posture of the infrastructure architecture to address current key threats and to identify, track, and defend against new and evolving threats. The Cisco SCF's ability to do this is its base of sound architectural principles rather than a focus on specific individual threats, technologies, vendor products, or implementation configurations.

The Cisco SCF is composed of the following three sections:

Model (addressed in this document)

The model defines the security objectives and their supporting security actions as a mechanism to organize individual controls and address the underlying architectural principles.

Control Structure (not addressed in this document)

The control structure defines the organization of individual controls and control sets and how they relate to the Cisco SCF model and methodology.

Methodology (Not addressed in this document)

The methodology defines the primary steps required to conduct a security architecture assessment using the Cisco SCF. The structure of controls, the scoring process, and the mechanism for aggregating these scores into meaningful results are also defined in the methodology.

The model and methodology sections provide the overall architecture for the Cisco SCF, including the various components, the interactions between the components, and the way in which components should be used to achieve the specific security objectives of an infrastructure security architecture assessment. As such, the Cisco SCF is not a design or implementation, but consist of guidelines—a set of rules or a playbook used to assess architectures in an orderly manner. Well-defined security infrastructure architectures, based on key foundational principles, have proven to be more robust and tolerant, surviving changes in technology, organizational boundaries, and external influences. The Cisco SCF is designed to be configurable and extensible through the definition and use of the appropriate control sets for a specific assessment's objectives and business environment. Figure 1 summarizes the components of the Cisco SCF and the major sources of influence on its design. 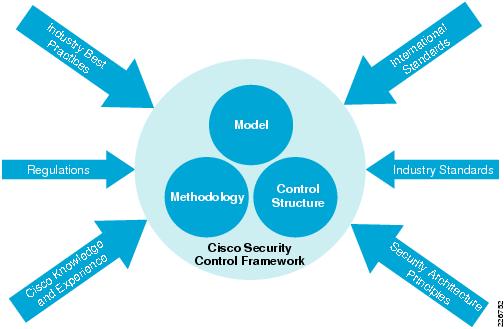 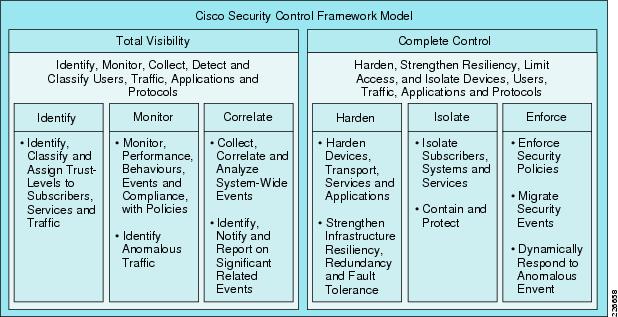 Monitoring and recording activity and patterns

Collecting and correlating data from multiple sources to identify trends, and system-wide events

Hardening IT infrastructure, including individual devices and increasing network resiliency

Limiting access and usage per user, protocol, service, and application

Protecting against known threats and exploits

Security actions provide organizational groupings of related attributes, capabilities, and functionality required in a security architecture to support a security objective. These security actions are described in the following subsections.

The total visibility security objective is supported by the identify, monitor, and correlate security actions described in the following subsections.

The identify controls deliver the capabilities for a system to identify and classify entities accessing a given resource and to then determine a trust level or state of trust for that entity. Usually, trust is established through mechanisms other than inspection of an IP address, including inspection of credentials. Identifying an entity applies to traffic from within the network and possibly external traffic entering a network.

The monitor controls address the fundamental capabilities and instrumentation to facilitate security visibility, combined with the ability to monitor the behavior and usage of the infrastructure components, including resources, connected systems, users, applications, and IP traffic.

The correlate controls focus on the ability of the system to derive and present intelligence related to the state of the infrastructure based on correlation and management of visibility data.

Correlation is the interpretation, dissemination, analysis, and classification of visibility data into meaningful operational information through the contextualization of seemingly unrelated events or changes. From a security operations perspective, it provides the foundation to apply policy enforcement and isolation controls.

Management is the ability to represent visually, in near real-time, the intelligence derived from various network elements including audit logs, event monitoring, fault knowledge, and health/status information.

The complete control security objective is supported by the harden, isolate, and enforce security actions described in the following subsections.

The harden controls address the ability of an infrastructure to withstand, adjust to and/or recover from adverse uncontrolled circumstances. Hardening includes both securing individual devices and the infrastructure as a whole through increased resilience, fault tolerance, route duplication and other means.

The isolate controls focus on the ability of a system to limit the scope and minimize the impact upon users, services, and systems from known and unknown disturbances. Implementation of the isolate controls provides the ability to isolate logical and physical functional blocks of an infrastructure into security zones to control or to prevent access between the functional blocks in the infrastructure and to limit the scope of security breech exploitation.

The enforce controls deliver the capabilities required to enforce the allowed behavior of connected systems, users, applications, and IP traffic. Policy enforcement may either be static (a control is applied on a permanent basis) or dynamic (a control is applied to specifically mitigate some discrete event or security incident).

Organizing Controls with the Cisco SCF

Identity-based network solutions (802.1x, NAC, and so on)

Out of band management

Management traffic encryption—Secure Shell (SSH), SNMP, and so on

All other trademarks mentioned in this document or website are the property of their respective owners. The use of the word partner does not imply a partnership relationship between Cisco and any other company. (0812R)