The security of a wireless LAN (WLAN) system is always a critical consideration in every WLAN deployment. Control of the WLAN access depends on the principles of authentication, authorization, and accounting (AAA), augmented by encryption to ensure privacy. This chapter focuses on the authentication and encryption aspects of WLAN security for RToWLAN deployments.

WLAN traffic is visible to any WLAN device within the radio frequency (RF) range of the WLAN infrastructure because the 802.11 wireless LANs is a shared network access medium.

The shared network access of WLANs creates the following challenges:

Each generation of WLAN security has addressed these challenges in different ways. But the key mechanisms are based on the same strategies that are used to secure communication over any untrusted medium—authentication and encryption.

There are several 802.11 security schemes that you can implement when you deploy a real-time traffic enabled WLAN. The type of security scheme or schemes that the network administrator uses depends on the capabilities and features that are supported by the WLAN network infrastructure and the specific RToWLAN client devices that will be deployed.

The following figure shows the basic components of WLAN security. The components that are required to implement secure network attachment and encrypted traffic for wireless network traversal include the following:
Figure 1. Secure Wireless LAN Topology

The best practice to deploy RToWLAN-capable client devices and RToWLAN services is that the security mechanisms that are enabled on the WLAN should provide user and device authentication and traffic encryption to ensure the following:

An open security scheme provides no encryption or authentication for client device access to the WLAN.

WLAN is open for attachment by all 802.11-capable devices. This security scheme is generally considered undesirable when deploying an enterprise WLAN, because the network is not protected from unauthorized access, and user and client traffic is not protected from interception and eavesdropping. However, despite the lack of encryption and authentication, open WLAN service set identifiers (SSIDs) are useful in some deployments when providing guest access for basic Internet connectivity or to onboard personal or noncorporate devices in bring-your-own-device (BYOD) scenarios.

In the case of BYOD deployments, the open network provides initial WLAN access for all clients and devices prior to identifying and onboarding authorized users and devices through additional network management and security services such that they have access to secured WLAN SSIDs or other areas of the enterprise network. You must take care to segment these open WLAN SSID networks from the rest of the secured enterprise network to prevent unauthorized access when you implement an open security scheme in these scenarios.

A Wired Equivalent Privacy (WEP) security scheme provides encryption through a common shared key with minimal, if any, user or device authentication for client device access to the WLAN. The following figure shows a WEP security topology where WEP encryption occurs between the WLAN client device and the WLAN infrastructure AP and WLC.

The original 802.11 standard defined the WEP encryption mechanism but did not define an authentication mechanism. The level of authentication that was offered in the original 802.11 standard was at a group level that required everyone in the group to have the same static encryption key. This key was used to encrypt unicast, multicast, and broadcast traffic. WLAN security solutions further augmented this group authentication by authenticating the client MAC address. However, the solution of authenticating the client MAC address is not considered a significant improvement in security for the following reasons:

The weaknesses in WEP and the demand for a solution drove the Wi-Fi Alliance to develop WLAN security improvements through the 802.11i workgroup. These improvements are defined as Wi-Fi Protected Access (WPA). WPA addressed the main weakness in WEP encryption by replacing it with the Temporal Key Integrity Protocol (TKIP). While there are slight differences between WPA and the related sections of the 802.11i standard, these differences are transparent to users. The sections from the 802.11i standard that are used by WPA primarily address the need to secure the WLAN while maintaining sufficient backward compatibility with WEP to prevent the need to upgrade or replace currently deployed hardware. Because TKIP reuses the core encryption engine of WEP (RC4), it allows WPA to be implemented in the majority of systems through a software or firmware upgrade. WPA also attempts to address the absence of an authentication mechanism which was missing in the original WEP definition and further provides improvement over MAC address authentication that is sometimes used in combination with WEP.

The security features that were developed in WPA were based on the recommendations of the 802.11i workgroup that was tasked with replacing original security features that were defined in the 802.11 standard. While the security changes from 802.11i that were adopted by WPA are important, the key component in 802.11i standard was the incorporation of the Advanced Encryption Standard (AES) into WLAN security that aligns its encryption mechanism with the latest industry standard for encryption. The underlying mechanism of AES-Counter Mode CBC-MAC (AES-Counter Mode describes the encryption mechanism, and CBC-MAC describes frame protection mechanism) is very different to those of WPA and WEP, and generally requires hardware upgrades to be supported. WPA2 introduces support for AES. The hardware requirements that are required to support AES encryption in WPA2 mean that migration from WPA is almost always dependent on a hardware upgrade or replacement. In many cases, it is easier to update the network infrastructure than to update the WLAN client infrastructure, and a complete migration to WPA2 is dependent on a generational change in the WLAN client infrastructure. Also, when you consider whether to migrate from WPA to WPA2, keep in mind that currently there are no known serious security exposures in WPA.

WPA and WPA2: Enterprise and Personal

The following figure shows the two different security schemes that the WPA and WPA2 define, WPA/WPA2-Personal and WPA/WPA2-Enterprise.

Generally, the use of WPA/WPA2-Enterprise is preferred over WPA/WPA2-Personal for enterprise RToWLAN deployments. WPA/WPA2-Personal is generally targeted more for home-user or small-office deployments. Shared key security systems do not provide the authentication features that are typically required for the enterprise, and can introduce operational issues due to the overhead in updating the shared keys if an RToWLAN client device is lost, stolen, or is part of a regular key rotation regime.

The reward for successfully cracking, guessing, or stealing the shared key is very high, because this key is used for all users and devices. This does not mean that you can not use WPA/WPA2-Personal for RToWLAN deployments. You must balance the enterprise security requirement for an AAA authentication server against the RToWLAN handset requirements and characteristics of the RToWLAN deployment. Real-time traffic services and applications are usually expected to be highly available, and high availability may be difficult to achieve in branch and remote environments that are dependent on a centralized authentication system. You can address this issue by distributing authentication databases to branches through local AAA authentication servers or the embedded AAA services of a Wireless LAN Controller; or by deploying RToWLAN on a WLAN system leveraging WPA/WPA2-Personal, given the lack of dependency on centralized authentication.

802.1X is an IEEE standard for port-based network access control and was adopted by the 802.11i security standard workgroup. The 802.1X standard provides authenticated access to 802.11 wireless LAN networks using the following logic:

During the authentication process, a unique per-user per-session shared key is derived, and a portion of this key is used as a per-session encryption key.

The EAP authentication process supports a number of protocols, and which protocol is used ultimately depends on the capabilities of the WLAN client device supplicant and the WLAN infrastructure. Regardless of the EAP type that is used, all protocols generally behave as shown in the example EAP flow in the following figure. 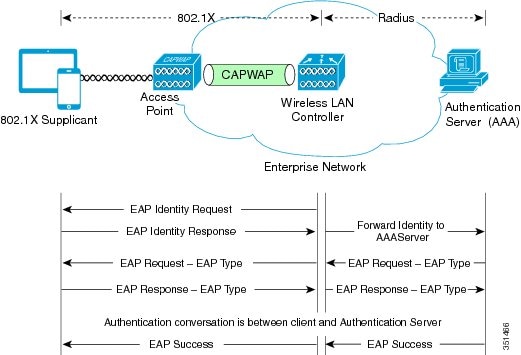 EAP as defined by RFC 3748 supports four packet types as part of the EAP authentication process:

The EAP-Flexible Authentication via Secure Tunneling (EAP-FAST) protocol was meant as a replacement for pre-802.11i Cisco proprietary Lightweight EAP (LEAP). LEAP was specifically designed to consider the limited processing power of application-specific or purpose-built devices, such as RToWLAN IP handsets. Given the security issues of LEAP, where weak passwords (less than ten characters) could be derived through analysis of the LEAP authentication transactions, EAP-FAST was designed to address these security issues while at the same time maintaining the "lightweight" nature of LEAP.

EAP-FAST is designed to provide the same tunneling protection as a tunneled authentication protocol such as EAP-Transport Layer Security (TLS), without requiring the Public Key Infrastructure (PKI) overhead associated with setting up the TLS tunnel that is used in EAP-TLS. Instead EAP-FAST typically relies on protected access credentials (PACs) for authenticating the tunnel between the client device and the authentication server. Although automatic PAC provisioning may be used, if the PAC is intercepted, it can be used to access user credentials. The use of manual PAC provisioning or optionally authentication server certificates during provisioning can help mitigate this potential issue.

The keys that are used for encryption are derived from the pair-wise master key (PMK) that has been mutually derived during the EAP authentication. This PMK is sent to the authenticator in the EAP success message, but is not forwarded to the supplicant because the supplicant has derived its own copy of the PMK.

The following figure shows the basic four-way handshake mechanism that is used in WPA/WPA2-Enterprise. 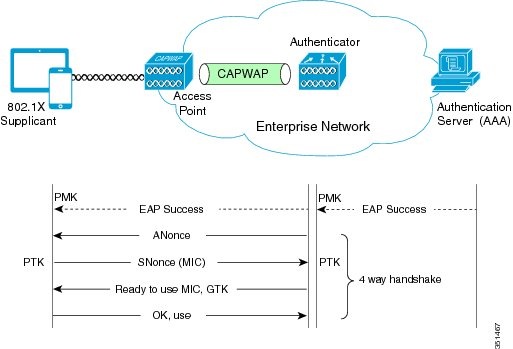 At this point, the supplicant and authenticator have verified that they both have a matching PMK, and both share the same PTK and GTK.

The difference between WPA/WPA2-Enterprise and the WPA/WPA2-Personal behavior is that the four-way handshake uses a shared key that is configured in the WLAN client device supplicant and the WLC. This shared key mechanism of authentication that is used in WPA-Personal does not provide a per-user or per-device authentication. Therefore, every device and every AP that is part of that WLAN SSID uses the same shared key. On the other hand, the key that is used for encryption, just as with WPA/WPA2-Enterprise, is unique per-user and per-session because of randomizing during the initial four-way cryptographic handshake.

After an RToWLAN client device successfully authenticates with the WLAN network and establishes an encryption mechanism for traffic flows, it is able to securely send and receive traffic through the AP that it is associated with. However, what happens when the RToWLAN device moves or roams from one part of the WLAN network to another and must associate to another AP on the WLAN? In these situations, if the RToWLAN client device user is on an active voice or video call, it is important that the association of the client device to the new AP occurs as quickly as possible while at the same time maintaining implemented security authentication and encryption mechanisms. To facilitate this rapid reassociation and reauthentication, authentication and encryption keys must be managed and in some cases cached.

An important aspect of the overall network design is to secure the wireless network for RToWLAN deployments. You must consider authentication and encryption method selection, scalability, and high availability aspects when you implement RToWLAN applications and services.

It is critical that you enable appropriate 802.11 security mechanisms for RToWLAN applications and services for a successful deployment. The most important considerations when you design a secure RToWLAN deployment are the capabilities of the WLAN infrastructure components such as access points, wireless LAN controllers, and the WLAN client devices themselves. Consider the following important factors:

While administrators generally prefer stronger security mechanisms, they must also consider the scalability of the security solution in terms of the number of users and the devices that will be deployed. In scenarios where large numbers of users or devices are deployed, it is important that the authentication servers or services are able to handle the authentication request load during the busiest times for wireless-client-device-network attachment.