As an example, let us examine a Voice access point layout for the 275 x 159 foot facility. This space is a drywall office and indoor commercial office environment with a path loss exponent of 3.5. These access point locations were selected based on desired signal strength and overlap calculations that were performed by the original designer. In architecting this design, the designer’s intention was to provide a solution that closely followed Cisco VoWLAN design best practices.

We opted for a dual band infrastructure, with an 802.11an/ac 5 GHz WLAN that is used by VoWLAN handsets and high-speed WLAN client devices. 802.11bgn 2.4 GHz operations is also supported, but due to the substantially reduced overall capacity on 802.11bgn brought about by the existence of only three non-interfering channels, its use is restricted to legacy data and voice devices. Legacy data devices would include devices that are unable to migrate to 802.11an/ac for reasons such as the client hardware device being no longer offered for sale, battery life concerns, and so on. Candidate legacy devices might include PDAs, older smartphones and tablets, and other devices with embedded wireless onboard that is not easily upgradeable. In the case of our example, we assume that there are still some users of 802.11bgn voice devices present in the environment that have not yet been addressed with 802.11an/ac replacements.

Smartphones like iOS or Android devices double up both as data and voice clients due to the inherent nature of devices and applications that can be loaded on them. For the purposes of this example, we shall treat smartphones as voice devices that can also do data and follow get a voice optimized design to be location ready as well. In Figure D-1, we assume the use of 35 ceiling mounted AP3700 access points, each of which is equipped with a pair of 2.2dBi antennas for 802.11bgn and a pair of 3.5 dBi antennas for 802.11an/ac. The access points and the antennas are mounted at a height of 10 feet. The design is intended to provide a minimum of -67 dBm signal level and a data rate of at least 24 Mbps on 802.11an for VoWLAN and high speed data clients, and a minimum of -67 dBm signal level and data rate of at least 11 Mbps on 802.11bgn for legacy data and voice clients. 802.11an VoWLAN devices are assumed to be Cisco IP phones with integrated antenna. Legacy voice and data client devices are assumed to possess nominal antenna gain of 0 dBi. Inter-access point spacing is approximately 42.7 feet and was selected to allow for a uniform distribution of access points within the floor interior and also ensure that the access point power levels required to produce our desired cell-to-cell overlap would fall within the capabilities of our client devices.

With the exception of access points 1, 5, 32, and 34, access points are not located directly at the floor perimeter. This is not optimal for the support of good location accuracy in all areas of the floor.

To facilitate optimal location tracking with this design, a few changes, additions, and adjustments will be necessary. Examining the current voice and data design and its associated parameters, the current access point spacing, antenna installation height, and placement pattern appear to be acceptable for location usage. However the lack of access points located at the actual floor perimeters and in the corners of the floor is a concern that should be addressed. This can be seen from the dashed line in Figure D-1 that illustrates the convex hull established by the current perimeter of access points. Note that areas at each corner and along each upper and lower perimeter lie outside of this boundary. Although these areas may not prove to be a hindrance to some users, for the purposes of this example, our goal is to ensure optimal location accuracy in all areas of the floor, including the conference rooms in the corners of the floor and in all perimeter areas. Therefore establishing a proper floor perimeter will be our first order of business.

The first step is to implement top and bottom access point perimeters as close to the building perimeter as feasible, while attempting to maintain the uniform density of access points shown in Figure D-1 to the highest degree possible. Maintaining a high degree of access point uniformity is especially beneficial to those users that depend on the Cisco Radio Resource Management (RRM) to maintain transmit power control and perform coverage hole remediation. RRM functions most effectively when the distribution of access points on a floor is as uniform as possible.

While the recommendations show that Access Points are placed at absolute corners or touching the perimeters of an space, Access Points maybe placed a little away from the perimeter to avoid RF signal wastage outside of the perimeter. Designers are encouraged to have a RF Plan that also maximizes RF usage, as well as provide good perimeter coverage.

At this point, we must decide on one of the following options:

Expand the equilateral formations composing our existing access point constellation to accommodate rearranging the top and bottom rows of access points to form the upper and lower portions of the floor perimeter. With this option and our example environment, a minimal number of additional access points would be required, as their primary use is to fill-in any missing areas on the left and right side perimeters. Since it requires expanding the separation between access points, this option is considered more aggressive when compared to option 2 below. Caution must be exercised to avoid modifying the design beyond the limits imposed on access point transmit power (see below).

Contract the equilateral formations composing our existing access point constellation to accommodate shifting upward the current top row of access points and subsequently introducing a sixth row of access points at the bottom to form a new lower perimeter. This option requires a greater number of additional access points when compared to option 1 above. However since we are reducing the inter-access point distances, this option typically does not possess the risk of increasing access point transmit power levels beyond that of the original design and is considered the more conservative option of the two.

Recall from our discussion that our transmit power levels are configured at +5dBm for 802.11bgn and +11 dBm for 802.11an/ac. To determine the new inter-access point separation that would be in effect if we were to uniformly expand the current formations (seen as equilateral triangles in Layout for 5GHz Voice and High Speed Data, 2.4GHz Legacy), we need to perform some basic geometrical calculations. We determine the new inter-access point separation required by assuming that the current top and bottom rows of access points are relocated such that they are positioned at the actual top and bottom floor perimeter. For the 275 x 159 floor in Figure D-1, this is performed by dividing the top-to-bottom width of the floor (159 feet) by the number of desired rows of equilateral triangular formations (4), thereby yielding a projected formation height of 39.75 feet. 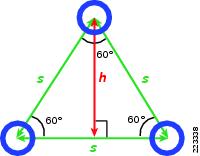 Solving for s, we calculate:

is expressed in radians

At this point, we have the information necessary to calculate the access point transmission power settings that will be necessary to achieve our desired cell signal boundaries. This can be performed using a form of the equation presented earlier to calculate receive signal strength (TXPOWER) from knowledge of our reference path loss, path loss exponent, transmit power and various miscellaneous receive and transmit gains and losses. This was discussed in Received Signal Strength (RSS), page 2-7. As it is the transmit power (TXPOWER) of our access points that we wish to calculate and not the receive signal strength, we shall use a modified form of the equation as follows:

For the purposes of this example, we have assumed:

Substituting the appropriate values along with our expectation of a -67 dBm minimum receive signal strength (RXPOWER) for both 802.11an/ac 802.11bgn, as well as the appropriate antenna gains, our cell radius in meters (30.88 feet = 9.41 meters, 33.4 feet = 10.18 meters), an estimated path loss exponent n of 3.5 and our reference path losses, we obtain the following results:

Note that these power levels have been rounded upward to the next available transmit power increment available on the AP3700 access point. Since this is +1.93 dBm higher than the required transmit power to achieve our recommended 20% overlap goal at a cell signal boundary of -67 dBm, we can expect that the overlap will exceed the 20% target. This is acceptable, as the 20% overlap is a minimum target. Similarly, for 802.11an/ac the access point transmit power level of +14 dBm is +1.42 dBm higher than what is required to achieve the recommended 15% overlap, once again resulting in more overlap between cells than expected.

The signal level measurements and the calculations described in this appendix, while based on generally accepted RF theory, are intended for planning purposes only. It is reasonable to expect some level of signal level variation from these theoretical calculations in different environments.

Keep in mind that immediately after installation and for a period of time after, it is reasonable to see a fair degree of RRM activity, as the system settles in and final parameter selections are made. At the conclusion of this “settling in” period, the system designer should ensure that the choices made by RRM are inline with the overall expectations of the design. Once the system has settled there should be little to no change in RRM managed parameters over time, as barring any significant environmental or equipment changes, the selections made for access point transmit power levels should remain fairly static. Any indication of constant fluctuation in assigned access point transmit power levels or channels should be regarded by the system administrator as potential indication of other anomalies that may be developing within the environment. The root causes behind such frequent fluctuations should be investigated and addressed promptly.

Figure D-3 illustrates the updated access point layout using the information from the calculations above along with perimeter access point placement which is discussed next. In Figure D-3 we can see the effects of the increase in inter-access point distance:

Based on our planning output and our calculations, our original voice and data design shown in Figure D-1 can be migrated to a location-ready design The result is a combined design that is well suited to support VoWLAN, high speed data and location tracking on 5 GHz, as well as legacy data and voice support with location tracking on 2.4 GHz.

The techniques and principles described in this appendix illustrate how a design performed in accordance with VoWLAN and data best practices can be upgraded to being “location-ready”. The key concepts behind how inter-access point separation, cell radius, and transmit power are inter-related and how these factors can be used to determine coverage overlap, can be applied to designs of various different sizes and shapes, as well as environments with varying path loss characteristics and shadowing.