A BYOD design should be able to accommodate devices that attempt to connect remotely to access the internal resources. The device could be a workstation, tablet, smartphone, or any other device which is allowed to connect securely to the network. In this design, the Cisco ASA is used as a VPN gateway for establishing an SSL VPN session to the remote endpoints. The ASA authenticates the user’s digital certificate. Cisco ISE then authenticates the user via an RSA SecurID token. The combination of both allows the device onto the network. Figure 27-1 shows the network components involved in remote device access. 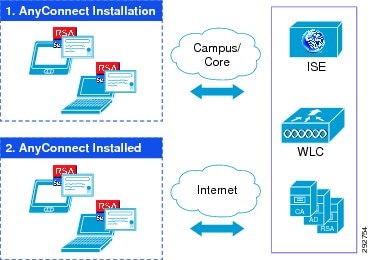 This design assumes the following for providing remote access capability:

Setting up one-time-password scheme for the user.

These steps must be completed at the campus location before it can be used remotely. This design does not allow remote provisioning of the devices.

The following components play a role in providing connectivity to remote clients:

VPN security is only as strong as the methods used to authenticate users (and device endpoints) at the remote end of the VPN connection. Simple authentication methods based on static passwords are subject to password “cracking” attacks, eavesdropping, or even social engineering attacks. Two-factor authentication, which consists of “something you know” and “something you have”, is a minimum requirement for providing secure remote access to the corporate network. For more details, see: http://www.cisco.com/web/about/security/intelligence/05_08_SSL-VPN-Security.html .

The RSA Identity Store is used primarily to authenticate remote users. The remote users are authenticated initially by their digital certificates and then they must provide a one-time password using a RSA SecurID token. To configure the RSA as an identity store, click Administration > Identify Management > External Identity Sources > RSA SecurID > Add, as shown in Figure 27-3.

Figure 27-3 RSA Server as an Identity Store for ISE 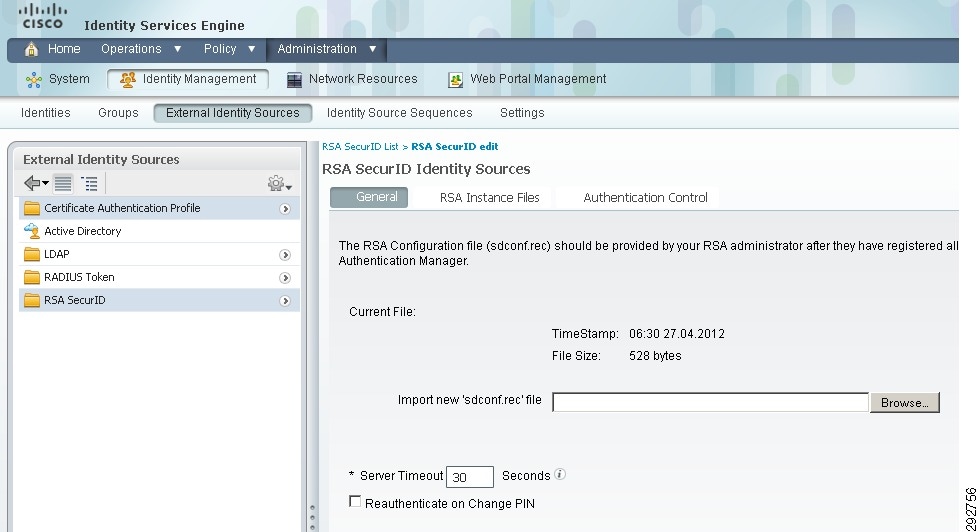 This section discusses the primary role of the ASA for this design, which is to terminate SSL VPN connections. The following are some of the many design considerations when implementing the SSL VPN:

For more information on the Cisco AnyConnect 3.0 client, see: http://www.cisco.com/en/US/docs/security/vpn_client/anyconnect/anyconnect30/administration/guide/ac01intro.html . 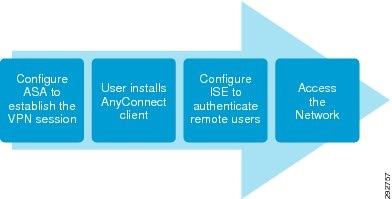 The configuration of the ASA involves many steps. Figure 27-5 shows, at a high level, the steps required to configure the ASA. The ASA can obtain the certificate from the CA server by using SCEP or by a manual cut-and-paste method. To obtain more information on deploying certificates on the ASA, see: http://www.cisco.com/en/US/docs/security/asa/asa80/configuration/guide/cert_cfg.html .

The following example shows the ASA configuration for certificate enrollment:

The above trust is used by ASA to obtain its own Identity Certificate from the CA server. In this design the enrollment method is terminal.

The following command shows the digital certificate issued by the CA server to the ASA:

The client must have network connectivity to the CRL distribution point as provided in the certificate.

ASA also needs a trust point to authenticate remote users’ identity certificates. The following is the configuration of the trust point:

The above trust point “Validate” is used to copy the root CA certificate. To understand more about how to cut-and-paste certificates using terminal method, see: http://www.cisco.com/en/US/docs/security/asa/asa80/configuration/guide/cert_cfg.html .

Group policy is an important building block for designing an effective access mechanism for users. The needs of specific users can differ. For example, one user might like to have a domain value of xyz.com and have 1.1.1.1 and 2.2.2.2 as their DNS servers. Another user might have similar requirements, but in addition might need a proxy server configured for their user name. If you have to attach all these attributes to each individual user, the configuration might become very large and complex. To solve this problem, multiple groups can be created, each with its set of individual attributes. In this case you can simply associate a user with a group name, rather than the large number of attributes, thus minimizing the configuration complexity when you have multiple users.

By default, the Cisco ASA creates DftGrpPolicy and the other group polices that inherit most of the common attributes. Only very specific attributes need to be configured explicitly for each group.

In the group policy definition for this design guide, the main attributes needed are vpn-tunnel-protocol, split-tunnel-network-list, and address pool location. The following example shows how this group policy was defined:

The above configuration steps illustrate how to configure SSLVPN sessions with AnyConnect. The same configuration can also be done using ASDM editor or by another management tool. To obtain more information about the configuration using other tools, refer to ASA configuration editor at: http://www.cisco.com/en/US/docs/security/asa/asa84/configuration/guide/vpn_anyconnect.html#wp1090443 .

Enabling AnyConnect VPN on the ASA

After defining the group-policy and connection profile on the ASA, the last step is to enable the AnyConnect VPN feature on the ASA. After enabling AnyConnect, the administrator can also configure additional features, such as pointing to the AnyConnect image software, NAM profile, and VPN Profile. The following example shows the configuration commands to enable AnyConnect modules:

webvpn
enable outside
anyconnect keep-installer installed ! This forces the anyconnect to remain installed on the endpoint device, after the session is terminated.
anyconnect modules none

Provisioning a Windows Device to Remotely Connect to the Network

For a corporate approved device to obtain remote access capability, the user must perform the following steps at the campus location:

Install the RSA SecurID application on the remote device and, with IT support, provision the software on the device.

The steps shown below are for one time installation. After the installation is completed, the user is never prompted for these steps.

Initiate an SSL VPN session using a web browser to the ASA VPN gateway IP address, which is shown in Figure 27-7. 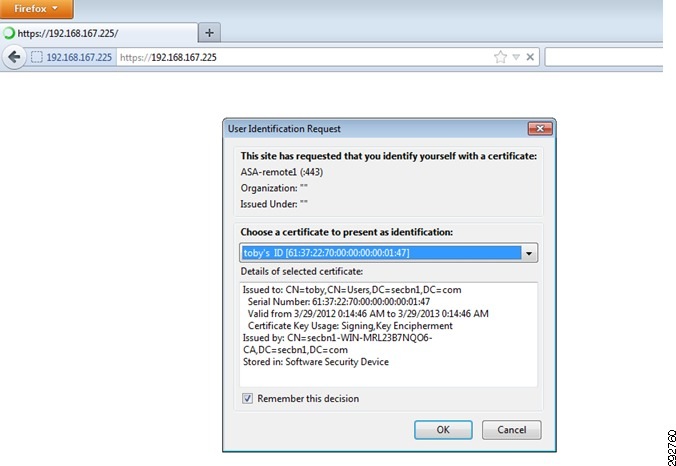 The certificates presented by the ASA remote endpoints and the identity certificate of the ASA must be signed by the same root CA server.

The user is presented with login screen and the user needs to select the Group to which they belong. The user is expected to select the group-policy name and the valid credentials, as shown in Figure 27-8. 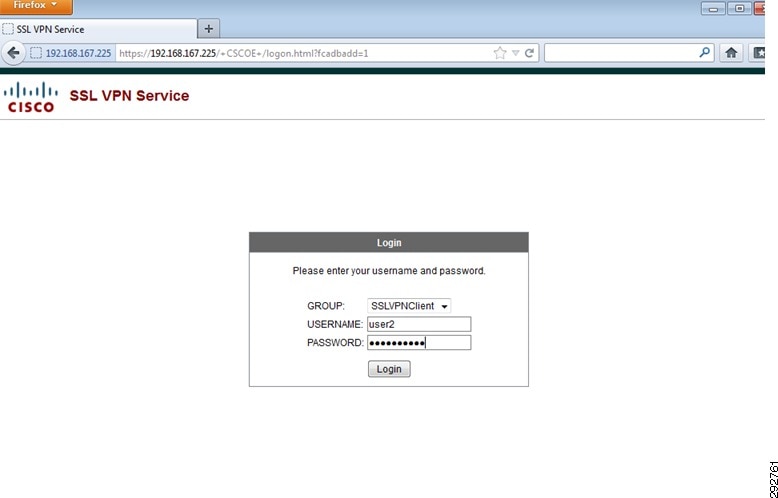 After the user credentials are validated, Cisco AnyConnect installation begins, which is depicted in Figure 27-9. Figure 27-10 depicts successful installation of Cisco AnyConnect on the workstation: 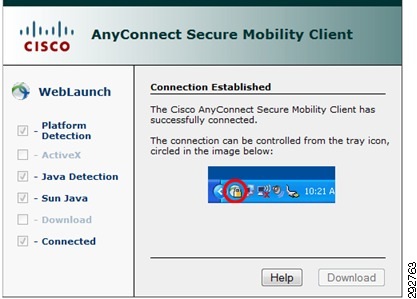 The logic flow in Figure 27-12 shows what happens when a remote device accesses the network. 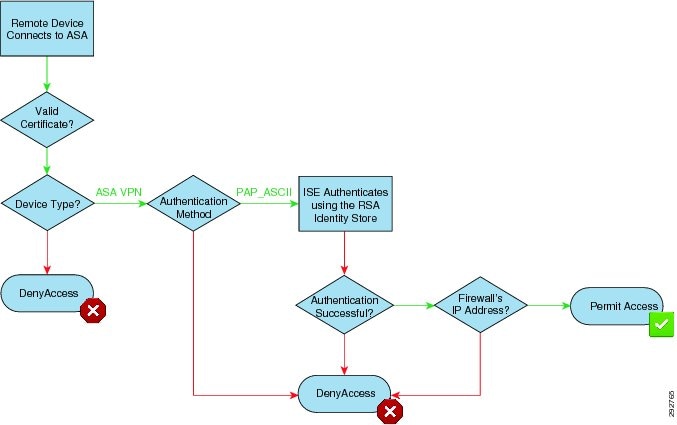 As shown in Figure 27-12, ISE validates the remote user in the following sequence:

Validate if the Device Type Equals ASA VPN. This is to ensure that only devices that are configured as VPN Type can initiate the communication with ISE.

To verify what rules were applied on the ISE, click Monitor > Authentication, as shown in Figure 27-15. 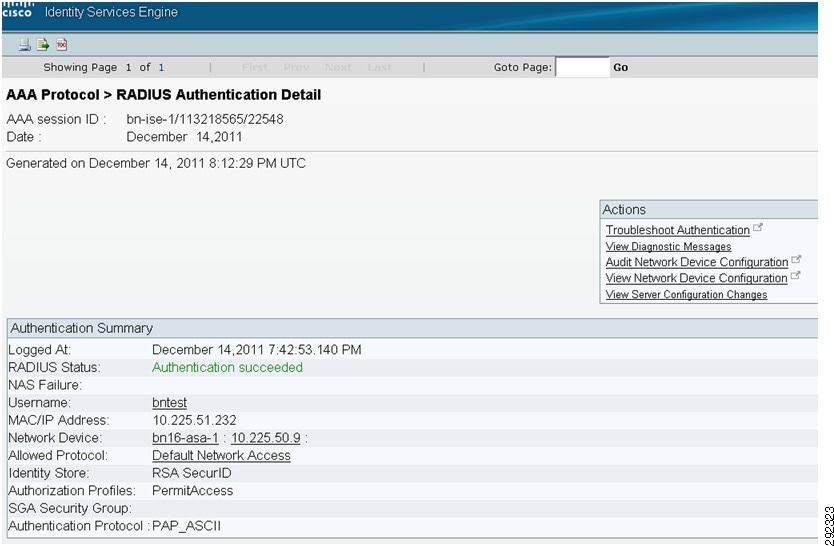 Provisioning an Apple iOS Device to Remotely Connect to the Network

Similar to workstations, an Apple iOS device that is provisioned at the campus can establish an SSL VPN connection to the campus network remotely using Cisco AnyConnect. The following steps must be completed by the user before establishing SSL VPN connectivity:

The iOS device should already have a digital certificate installed. Figure 27-16 shows an example of a provisioned device. 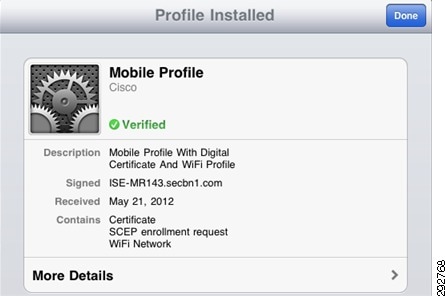 The user should install the Cisco AnyConnect from Apple’s App Store.

Configure the profile on AnyConnect and select the certificate which is already installed in the device (Certificate Provisioning must happen before initiation remote VPN communication), as shown in Figure 27-17. 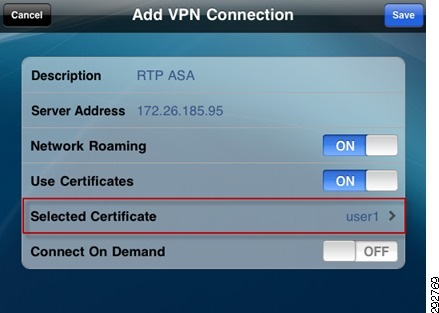 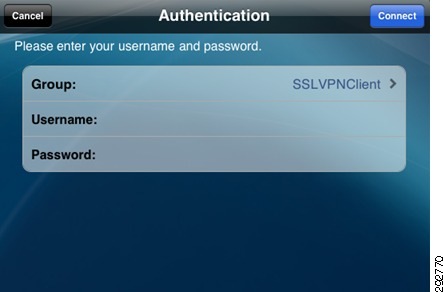