CSPM is a multi-device policy-based management tool for Cisco security products, including PIX Firewalls, the Cisco IOS firewall feature set, Cisco 7200 series router, and Intrusion Detection System (IDS) Sensors. CSPM allows these security devices to be configured and managed with an easy-to-use graphical user interface (GUI). CSPM simplifies the configuration of complex VPN and security devices by creating each device configuration file after the security policies have been defined. CSPM also distributes each device configuration in a secure fashion with IPSec. CSPM allows security devices to be configured from a central location. CSPM also provides other management services including monitoring, notification, and reporting.

The Cisco VPN/Security Management Solution provides key functionality to assist customers who are deploying Cisco 7200 series routers and who require monitoring of remote access and site-to-site VPNs, based upon IPSec, L2TP, and PPTP. The solution also provides key features for deployment and management of perimeter security using the Cisco PIX Firewall.

The following modules are included in the Cisco VPN/Security Management Solution. Together, these modules provide essential VPN and security management capabilities:

CiscoView—Provides administrators with browser access to real-time device status, and operational and configuration functions. CiscoView is the most widely used Cisco graphical device management application and is now web-based.

The IPSec MIB feature allows users to configure and monitor their IPSec MIB tunnel tables and their trap notifications using Simple Network Management Protocol (SNMP). IPSec MIB can increase the performance of your Cisco VPN, as trap notifications can be sent only once and are discarded as soon as they are sent. This reduces traffic and creates lower overhead on your network. This feature allows users to specify the desired size of a tunnel history table or a tunnel failure table. The history table archives attribute and statistic information about the tunnel; the failure table archives tunnel failure reasons along with the time failure occurred. A failure history table can be used as a simple method to distinguish between a normal and an abnormal tunnel termination. That is, if a tunnel entry in the tunnel history table has no associated failure record, the tunnel must have terminated normally. However, a tunnel history table does not accompany every failure table because every failure does not correspond to a tunnel. Thus, supported setup failures are recorded in the failure table, but an associated history table is not recorded because a tunnel was never set up.

This feature also allows a router to send IPSec trap notifications, which are MIB related, to a random or specified host. A trap notification may be sent when a particular event, such as an error, occurs.

The traps are not supported in the current version of the MIB. They only pertain to the Cisco IOS-specific IPSec MIB.

This section provides an overview of Cisco VPN Device Manager (VDM). VDM is a wizard-based GUI application that allows simplified VPN configuration of the device on which it resides.

VDM enables network administrators to manage and configure site-to-site VPNs on a single IOS VPN device from a web browser, and view the effects of their changes in real time. VDM implements a wizard-based GUI to simplify the process of configuring site-to-site VPNs using the IPSec protocol.

VDM software is installed directly on Cisco VPN devices. It is designed for use and compatibility with other device manager products.

Figure 5-1 shows the VDM Home Page page under the System menu. This is the first window to appear after you launch VDM and is the starting point for all other VDM activities.

The following other options are also available from the System menu: 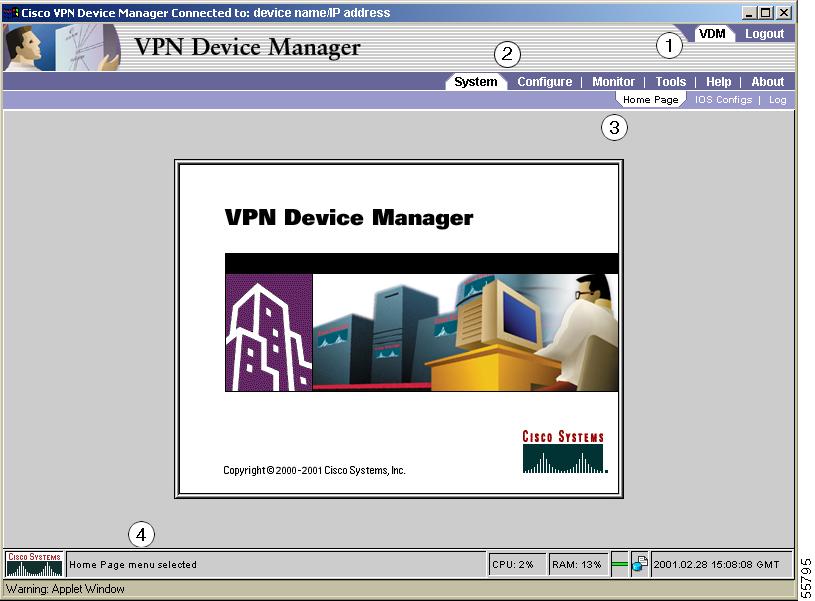 Using a browser, you can log into a Cisco device and use VDM to efficiently configure VPNs on it. You can set particular tunneling, encryption, and other VPN options, which can then be applied to the interfaces facing peer devices. Use VDM to conveniently troubleshoot specific problems and perform configuration updates and changes.

You must configure some Cisco IOS CLI commands before VDM becomes fully operational. Details about these commands can be found in the Cisco IOS feature document VPN Device Manager.

This section contains information about the following benefits of using VDM:

VDM configures only the device from which it is launched. It does not read or write configuration information to or from other devices.

The following navigation methods ensure that you can conveniently identify your current location within each wizard:

Cascading highlighted menu tabs at the top of the GUI.

A step-by-step tasks list in each wizard's left frame contains a highlighted bar which moves down the list as you progress through that wizard.

VDM is distributed in the following two components:

File to be installed on the Cisco IOS Flash memory file system.

Figure 5-2 shows the type of VPN that VDM can configure: 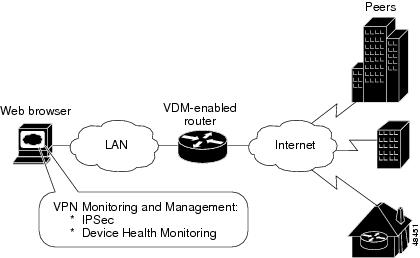 You can install the VDM client on your Cisco device in the following ways:

Install a Cisco IOS version that VDM supports and upload the VDM client to the device Flash memory.

To simplify its use, VDM starts as a GUI into a web-browser home page that is run from the managed device (VPN device on which VDM is installed) at connection time. VDM is a Java application that uses continuous XML data exchange to update the appropriate part of the VDM GUI.

VDM does not work with RSA-encrypted nonces. (Nonces are random numbers or keys that are generated once and not reused.)

Figure 5-3 shows the Connections page for the VDM Connections wizard. This wizard allows you to add, edit, or remove VPN connections. The Select a Connection list displays existing connections.

The Connection Description list provides the following details about the selected connection:

Local and remote hosts and subnets

Interface(s) to which the connection is applied 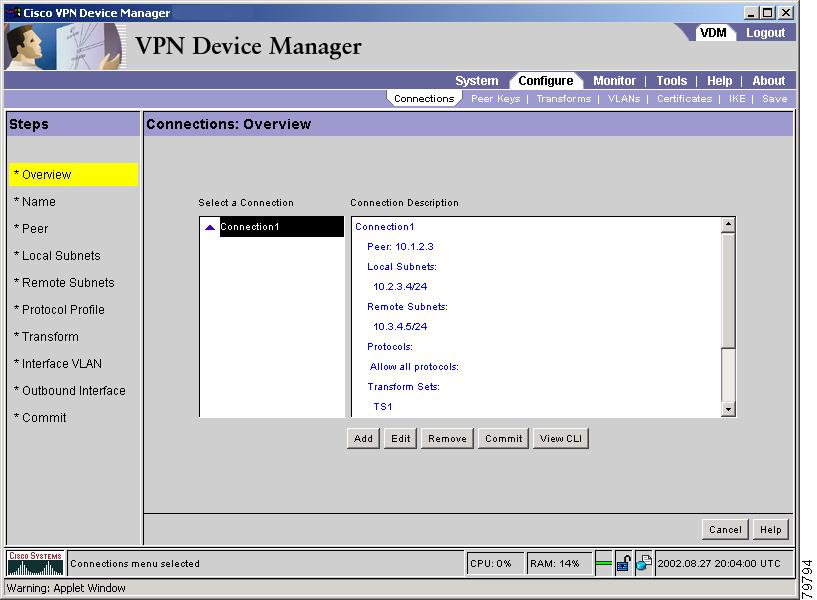 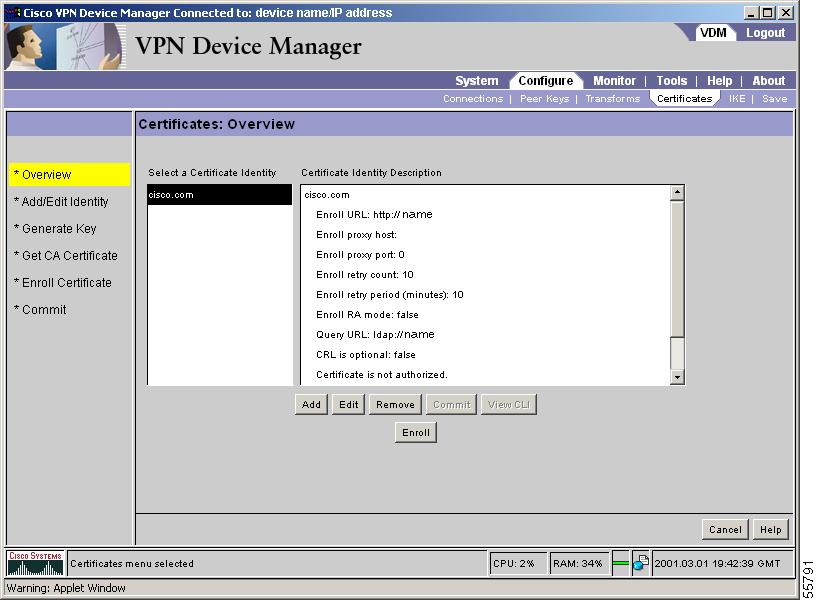 Figure 5-5 shows the IKE Overview page for the VDM IKE wizard. This wizard allows you to add, edit, or remove IKE policies. 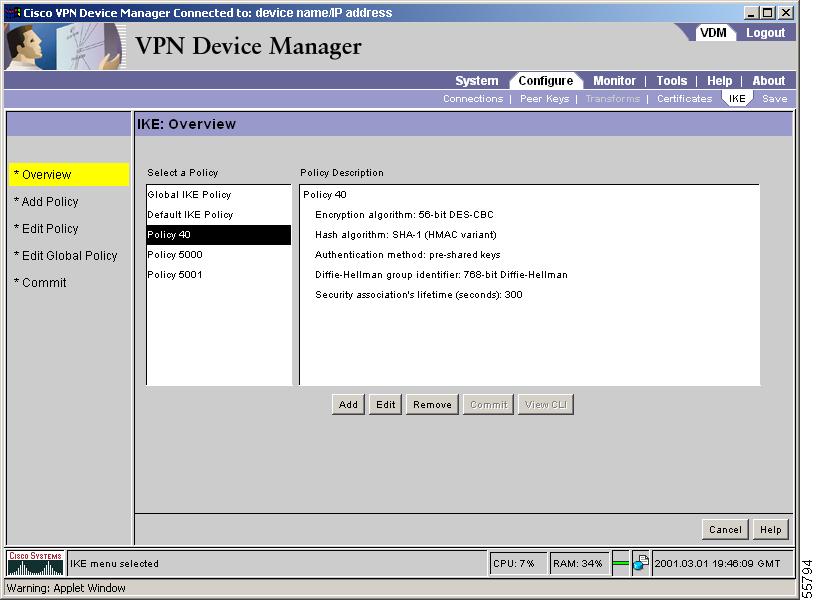 VDM monitors general system statistics and VPN-specific information such as tunnel throughput and errors. You can configure VPNs in parallel, while monitoring is automatically updated based upon a selected polling interval. The graphing capability allows you to compare such parameters as traffic volume, tunnel counts, and system utilization.

Figure 5-6 shows the VDM Charts page with the CPU Utilization chart selected. You can generate many charts from this page based on your charting object and charting object attribute selections.

You must first select an object attribute to generate a chart. For example, under the IPSec object, you have a choice of the following three different object attributes:

In and out packets

You can customize charts to display both historical and real-time data from periods as short as 10 minutes to as much as 5 days. 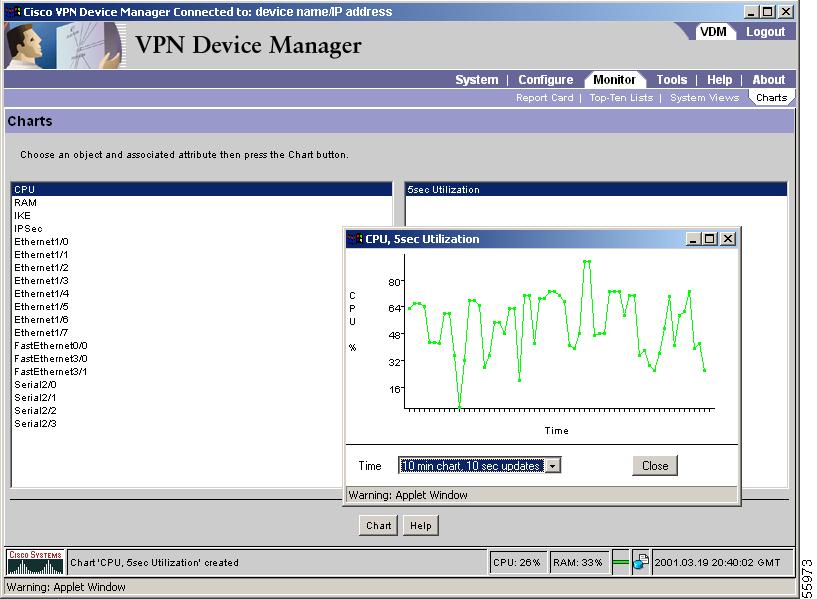 Figure 5-7 shows the VDM Report Card page, which displays information about the following activity on the device: 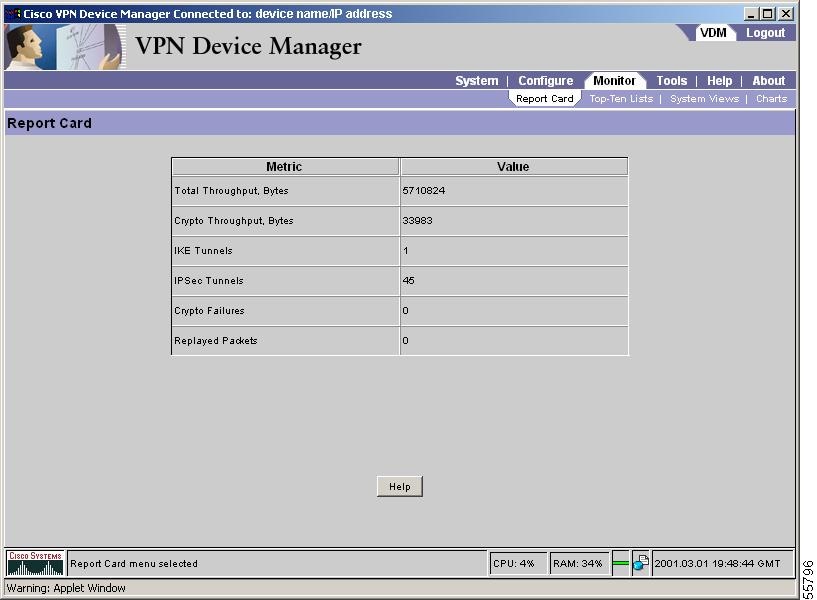 Figure 5-8 shows the VDM Top-Ten Lists page, which displays details about IKE and IPSec tunnels by duration, errors, and traffic volume. You can select any of these reports from the drop-down list. Further information on VDM can be found in the following related documents: