The following describes how to deploy agents to your ISRs using the install script.

Before you deploy your agents as virtual services, ensure that your ISRs have enough RAM and the proper hardware installed, as described in ISR 4000 Series Platform Requirements.

For more information on hardware installation, see the Hardware Installation Guide for the Cisco 4000 Series Integrated Services Router, at http:/​/​www.cisco.com/​c/​en/​us/​td/​docs/​routers/​access/​4400/​hardware/​installation/​guide4400-4300/​C4400_​isr.html.

When you run the install script, it reads the properties file, and does the following for each agent:

The script references the install.yaml properties file, also located on the controller. The following diagram tracks the various properties in the deployment process.

Figure 1. ISR and Agent Deployed as a Virtual Service 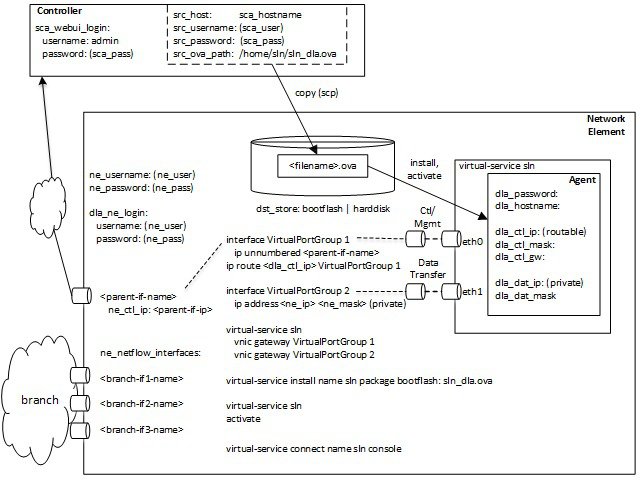 The arrow labeled copy (scp) demonstrates the install script copying the agent .ova file from a network location of your choice to the Network Element (4331, 4351, 4431, or 4451 router). In this example, the script copies the file from the deployed controller using the SCP protocol to the ISR.

For all commands issued to the ISR, the script uses the configured credentials (ne_username, ne_password) to connect to the network element (ne_ctl_ip).

The following properties control how the script copies the file:

Cisco recommends you define the controller as the source host, upload the .ova to the controller, and copy the file to all branch routers.

The center of the diagram shows the commands the script uses to create, install, and activate the agent as a virtual-service (container), and references the properties file to apply values to the variables.

Finally, the script issues the connect command to log into the virtual service console to configure the following:

Figure 2. NetFlow Operation on the ISR 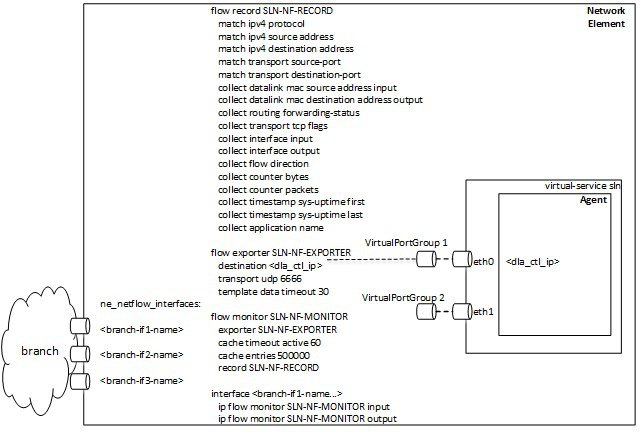 The script creates the following:

Agent Addition to the Controller

Each agent is added to the controller as Disabled. You must log into the controller web UI to enable the agent. If you register your deployment with Smart Licensing, enabling the agent also consumes a license entitlement.

The agent install and upgrade properties file (install.yaml), located on the controller, is in YAML format, and stores settings as key-value pairs. The install script uses these settings to deploy 1 or more agents. The controller contains an install.yaml.example file, which contains the basic YAML format and sample settings. You can rename this file to install.yaml and update the settings for your deployment.

You define usernames and passwords in the properties file, which the install script uses to access ISRs, the controller, and agents. If you comment out a password property by placing a pound sign (#) at the beginning of that line, the script prompts you for that password while running. However, if you comment out the dla_password or ne_password property as a global setting, the script prompts you for the first agent where the property is not defined. It then uses the password you enter for every agent which does not have the property defined.

When you run the script, it prompts you for any password you do not define.

The following are the branch-specific property settings. For each new set of branch settings, you must preface them with a dash (-).

The dla_description and ne_ctl_ip properties can only be updated through the install script on initial agent installation. If you want to update the agent description after installation, modify it in the controller web UI. See the Cisco Stealthwatch Learning Network License Configuration Guide for more information.

Configuring VRF Forwarding on the ISR

In the install.yaml properties file, if you added the vir_portgroup_1: ip_unnum interface to a non-default VPN routing and forwarding (VRF) instance on your ISR, you must define the vir_portgroup_1: vrf_forwarding property in the file. This allows the script to properly copy the .ova file to the router using SCP.

On the ISR, you must also configure the vir_portgroup_1: ip_unnum interface as the source address for an SSH client device, so the script can properly copy the .ova file.

4.    Using Agent Properties File Settings as a guide, update the properties file with the necessary settings.

Based on the properties file settings and the script options you select, the script attempts to deploy agents in batches, copying the .ova file to the ISR, then deploying it.

As the script runs, it displays progress updates on the console every 10 seconds. These updates display the total number of agents to deploy, the number in progress, and the number that succeeded and failed.

If you commented out password properties in the install.yaml properties file, the script prompts you during the progress updates. For agent passwords, if you did not define a global password, the first time the script deploys an agent without a password defined, it prompts you for the password, then uses this password for all remaining agents without a password defined. The script also logs its progress to several log files.

You can exit the script at any time by pressing Ctrl-C.

Run a basic installation from the controller command line with the following command:

3.    If you did not update install.yaml with passwords, enter those when prompted.

The install script logs to multiple files on the controller at /opt/cisco/sln/install_upgrade/container/LOGS for virtual service agents. These files include:

Each time you run the install script, it moves the existing log files to /opt/cisco/sln/install_upgrade/container/PREV_RUN, deletes the files in that folder, and generates new log files in the LOGS folder.